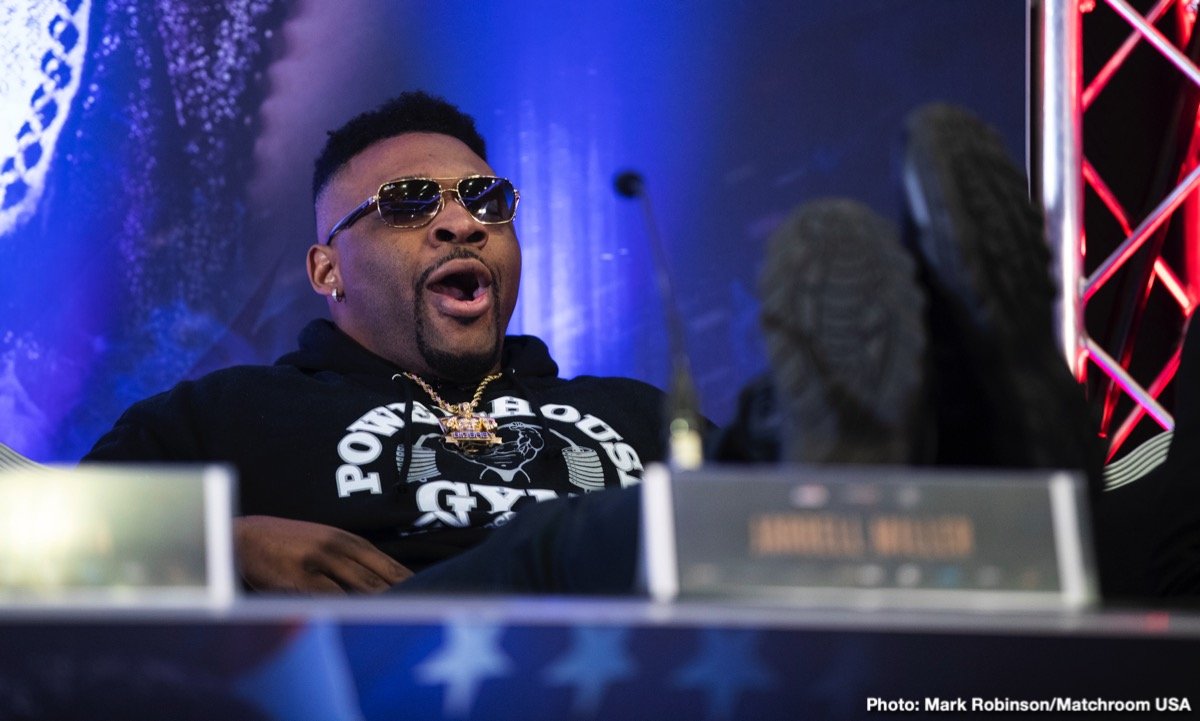 By Kenneth Friedman: Heavyweight Jarrell “Big Baby” Miller (23-0-1, 20 KOs) has verbally agreed to terms with Top Rank Boxing promotions for a mult-fight deal, according to @MikeCoppinger.

Top Rank will get a lot of flak from boxing fans for signing Miller, due to his positive drug tests last year.

With the addition of the Brooklyn, New York native Miller, he’s a chess piece that Top Rank can match against their other heavyweights. Miller weighed in over 300 lbs in his last three fight without it hurting him.

Big Baby Miller with good fights available to him

Top Rank will likely use Miller as opponent to fight these guys in their stable:

It’s going to be a long road back for the 6’4″ Miller, as he’s got to get winning again, and climb the rankings for him to get a meaningful shot. You’d have to believe that the only way Miller gets a title shot is if he becomes a mandatory. Depending on the opposition Miller is fed by Top Rank, it could take years for him to earn a title shot the old fashioned way.

Even heavier than Andy Ruiz Jr., his massive weight hasn’t negatively impacted his career yet. Of course, Miller hasn’t fought a mobile heavyweight like Anthony Joshua. There’s a very good chance that Joshua would out-box Miller in the same way he did the 283-lb Ruiz Jr. in their rematch on December 7.

When the 31-year-old Miller does sign with Top Rank, his fights will be shown on ESPN. Top Rank is taking a gamble in signing ‘Big Baby’ Miller, since he hasn’t fought in 14 months since stopping Bogdan Dinu in the 4th round in November 2018.

Miller had been scheduled to challenge IBF/WBA/WBO heavyweight champion Anthony Joshua in February 2019 last year, but he failed a drug test. He tested positive for the banned substance GW501516.

Miller would have gotten a big $6 million payday for the Joshua fight, and likely additional fights against Matchroom heavyweights. Big Baby would have made a massive amount of money. Instead, it was Ruiz Jr. who ended up taking advantage of Miller being pulled from the card with him getting the big paydays against Joshua.

Later it was discovered that Miller also tested positive for HGH and EPO, both of which are banned substances. As a result of Miller’s positive tests, he was denied a boxing license by the New York State Athletic Commission. Joshua subsequently fought replacement opponent Andy Ruiz Jr. on June 1 last year, and was stopped in the 7th round at Madison Square Garden in New York.

Miller was later given a six-month suspension by the World Boxing Association.