Deontay Wilder on Anthony Joshua: ‘He was SCARED, afraid of confrontation’ against Ruiz 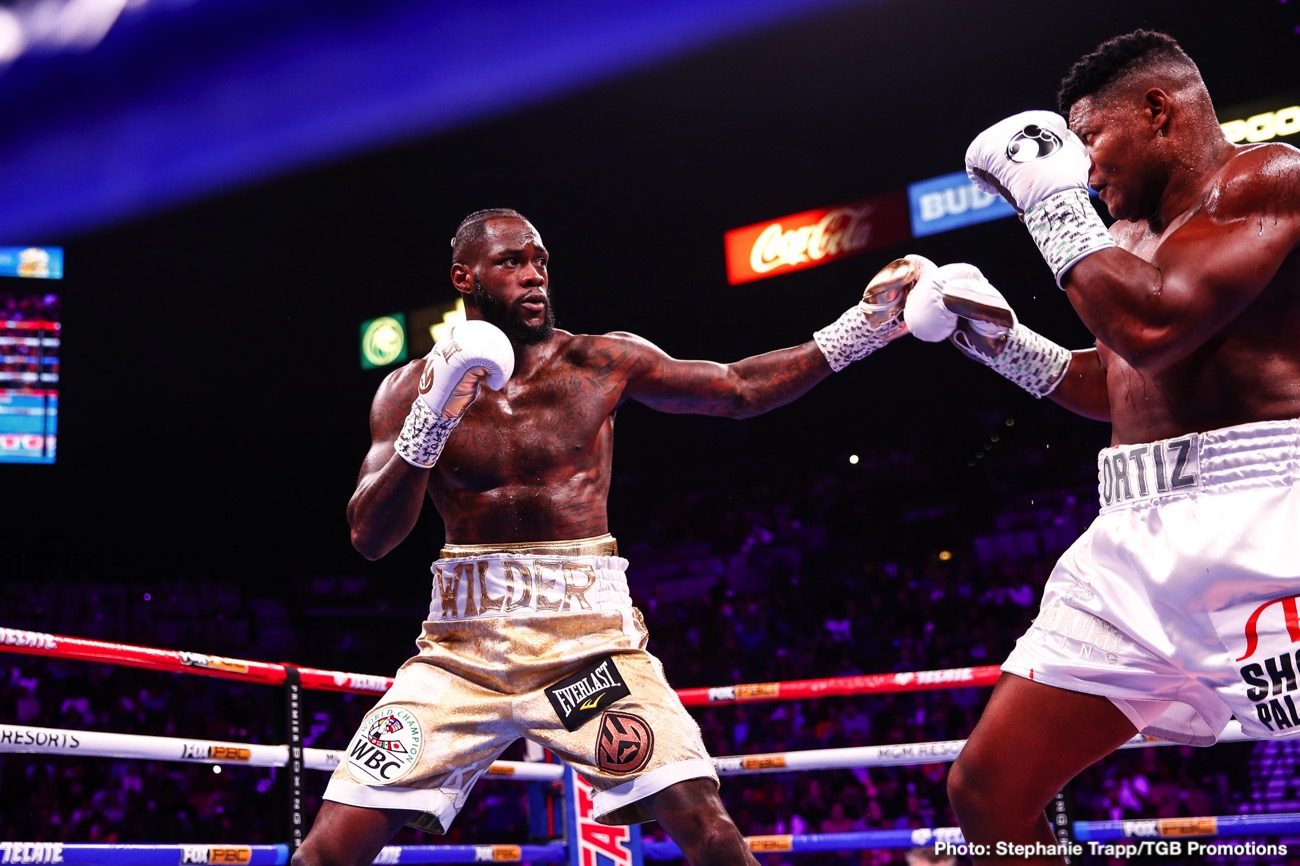 By Chris Williams: Deontay Wilder says Anthony Joshua fought like he was scared of a confrontation with Andy Ruiz Jr. last Saturday night in Saudi Arabia. He says his the Wladimir Klitschko style he used to beat Ruiz was BORING with his holding and running for 12 rounds. WBC heavyweight champion Wilder says it looked bad for a fighter with the huge size advantage the 6’6″ Joshua had to be running from his smaller opponent Ruiz.

Interestingly enough, Joshua has been receiving heeps of praise by boxing fans from around the world for his performance in beating Ruiz (33-2, 22 KOs) to win back his IBF/WBA/WBO heavyweight titles. Although some fans weren’t impressed with the way Joshua fought in such a timid manner against the 283 lb Ruiz, a lot people thought he did a brilliant job.

Obviously, Wilder isn’t one of them, because the style that Joshua used was so alien to how he fights. Wilder is a warrior, who ALWAYS shoots for knockouts in his fights. To see Joshua using the Klitschko style of holding and moving, it was off putting for him.

Joshua was BORING with his Klitschko style – Wilder

“I don’t want to see the Klitschko style. It was boring,” said Wilder to BSOTV about Joshua’s performance against Ruiz. “That’s what he was doing in doing enough to get by, but the thing about it is, you got a six inch height advantage, and you got an eight inch reach advantage.

“Why is you running from the smaller guy? You’re punching, holding and grabbing like you’re afraid of a confrontation. He didn’t want no engagement. He was just scared,” said Wilder.

You would think it’s pretty obvious why Joshua was RUNNING from Andy Ruiz last Saturday night. Ruiz already showed that Joshua couldn’t take his power, and that he lacked the hand speed to trade with him.

Given what happened in their previous fight on June 1, it makes all the sense in the world for Joshua to use the punch, grab and run style that Klitschko used to employ during his career. Klitschko reportedly gave Joshua advice for the rematch with Ruiz, which explains why he ran so much.

Joshua can extend his career if he continues to use the Klitschko style of fighting from this point on, but he’ll limit his growth in terms of popularity by doing so. A lot of American boxing fans don’t like the jab, hug and run style that Wladimir used.

Wilder: I would have demolished Joshua

“If he was in there with Deontay Wilder, I would have come in there and demolished him,” said Wilder about Joshua.

Despite getting dominated, Ruiz did land shots on Joshua, but he couldn’t hurt him with any of his punches. Ruiz doesn’t possess one-punch power like Wilder, but he got Joshua’s attention a few times during their rematch last Saturday. If that had been Wilder landing those same shots on the chin of Joshua, he probably wouldn’t have lasted long.

The way Joshua has been hurt in his fights with Ruiz, Dillian Whyte, and Alexander Povetkin, he has to use the Klitschko style if he wants to prolong his career as one of the elite fighters. Joshua can’t stand and slug with his opponents, because he lacks the chin and the stamina to fight that way.

His promoter Eddie Hearn has done a good job of protecting him throughout his career by steering him away from guys like Deontay, Luis Ortiz and even David Haye, but he can’t be counted on to do that forward. Hearn slipped up and matching Joshua gain an in shape Ruiz last June. If Hearn was more familiar with Ruiz, he likely wouldn’t have made the fight with him and Joshua.

Joshua doesn’t want to fight me OR Fury – Wilder

“They’re putting it out there, ‘Oh, we want it.’ A lot of people can read into bull s—, and we can understand and identify what’s coming out of his mouth. We just don’t have enough toilet paper to wipe it as it comes,” said Wilder.

“I don’t want to put no energy into that, and I don’t want anyone else putting no energy into that,” said Wilder in response to Joshua saying that he’s ready to fight the winner of the Wilder vs. Tyson Fury rematch. “They’ve been contradicting people from the beginning, and manipulating people from the beginning, and they’ve been telling a whole lot of lies. I’ll believe it when I see it,” Wilder continued.

It is kind of strange that Hearn has NEVER set up fights between Joshua and Wilder or Fury. I mean, those should have been fights that were made ages ago instead of matches with an old 40-year-old Wladimir Klitschko, Eric Molina, Carlos Takam or Charles Martin.

If what Wilder says about Joshua turning down $50 million to fight him is true, then it’s hard to believe that he does have any true interest in fighting him. The $50 million back when was supposedly offered was a lot of money. Of course, that pales with the $75 million to $85 million that Joshua was rumored to have gotten for his rematch with Ruiz Jr. last weekend, but that’s because of the rematch contract. It was slanted heavily in his favor. Ruiz got a reported $12 million. Wilder wouldn’t ever agree to that.

“They thought Ruiz was an easier opponent, and he ended up getting beaten. We know who ran from who. I always wanted to fight. Joshua got his a– beat. I will unify the division. It’s just going to take a little longer time. If I wasn’t in this division, if I wasn’t the monster, the man and the King, the baddest man on the planet, they would have been unified the division. But because I’m here, it’s a little bit different,” said Wilder.

From Hearn’s perspective, it’s better for him to play it safe by NOT letting Joshua fight Wilder or Fury. Yeah, there’s a HUGE gain for Hearn, Matchroom Boxing and Joshua if he beats those guys, but there’s an even bigger loss if he gets knocked out by both of them. As such, it’s better for Hearn to keep the gravy train going by matching Joshua carefully against fighters like the 283 lb Ruiz, and then make a big deal out of it when he beats him. Hearn wouldn’t be able to count on Wilder and Fury not taking training seriously for a fight with Joshua, and coming into the contest in pitiful shape.

Will Hearn wait until Joshua is old before he puts him against Fury and Wilder?

There’s a chance that the boxing world will see Joshua face Wilder and Fury at some point in his career, but that probably won’t happen until he’s around 40, and near the end. When it doesn’t matter anymore whether Joshua loses, then it’s likely that both of those fights will happen. Until then, we’ll likely see Joshua face guys like Oleksandr Usyk, Kubrat Pulev and Michael Hunter.

Some believe Hearn’s focus right now is more slanted towards the business side of boxing rather than seeing it in terms of the sport when it comes to Joshua. He’s making a mint each time he fights. So if Hearn’s angle is to make sure the green keeps coming in at all costs, then why mess that up by putting Joshua in with talents like Fury and Wilder? Let those guys take the risks with their careers. Hearn is matching Joshua safely by putting him in with guys that he pretty much knows he can beat beforehand. It’s smart match-making by Hearn, but very, very boring.