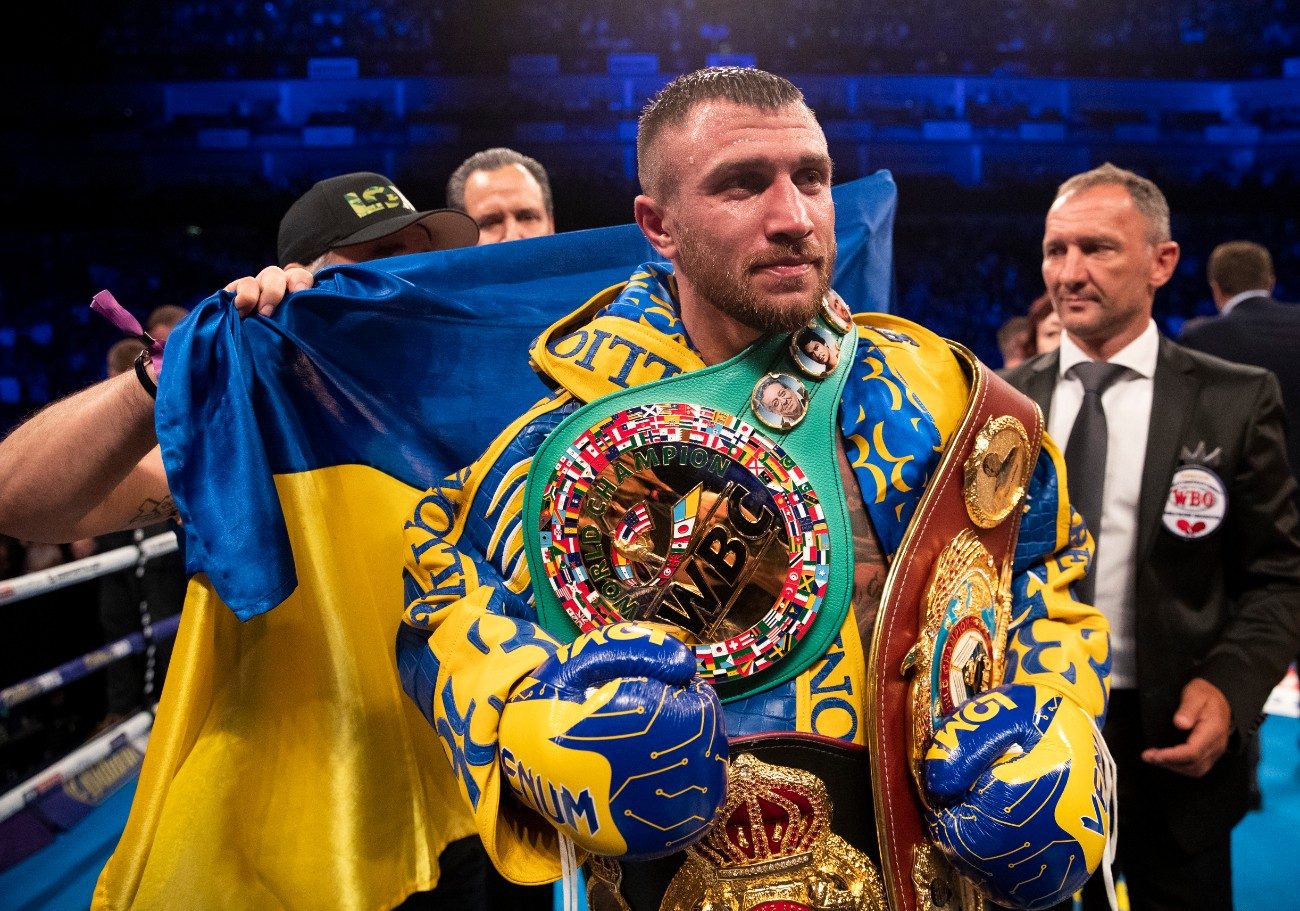 By Chris Williams: WBC president Mauricio Sulaiman has responded to the comments made this week from Vasiliy Lomachenko in him DENYING that he requested or filed paperwork to become the WBC Franchise lightweight champion. Sulaiman says, “It’s a FACT” that Lomachenko’s promoters at Top Rank asked for him to be made the Franchise champion.

Why is Lomachenko in the dark about Franchise tag?

It’s unknown why Lomachenko (14-1, 10 KOs) wouldn’t know about Top Rank asking the World Boxing Council for him to be designated as the Franchise champion, because it’s something that could be clarified quickly by them. In an interview this week, Lomachenko admitted that he vacated his WBC lightweight title.

Why would Lomachenko move to vacate his lightweight title if he wasn’t in agreement with him being given the Franchise tag. After all, Lomachenko’s goal is to unify the lightweight division. He’s captured 3 of the 4 titles in the 135-lb weight class, and he’s waiting to fight for the fourth belt [IBF] against the winner of the Richard Commey vs. Teofimo Lopez fight.

Sulaiman: Lomachenko’s promoters contacted the WBC for him to be made Franchise champion

“There’s no lie or truth, it’s a fact,” said WBC president Sulaiman to Fighthype when asked if the Franchise tag had been given to Lomachenko at the request from their side. “His promotional company contacted the WBC and requested the WBC board to consider designating him as the WBC Franchise champion. We did the voting in a presentation in Cancun, and Lomachenko signed it,” said Sulaiman.

“I don’t understand so much fuss about the Franchise,” Sulaiman continued. “If it was not important, no one would talk about it. Everybody has their own right and opinion, but I’m very confident that eventually it’ll prove to be a betterment to the sport of boxing. What the Franchise does is it allows a few fighters of a certain characteristics to grow the industry of the sport, and to go out and fight in different weight categories to fight different champions and to fight the fights that the public wants to see,” said Sulaiman.

Lomachenko can always vacate his Franchise status if he’s resistant to it. He hasn’t done that, which would seem to indicate that he doesn’t have a problem with it.

Lomachenko KNEW about it [Franchise] – Sulaiman

“I understand all the critics. I accept them. We’ll see. Time will tell. It’s not a belt. The Franchise designation is not a championship or a new title. It’s just a designation where that WBC champion receives a list of benefits and a list of obligations.

“Lomachenko KNEW about it. I don’t know why. The interview is in Ukrainian. So I don’t know what he said, but maybe there was a confusion inside his team or in the wording or maybe it’s the word that you are asked by the media,” said Sulaiman about Lomachenko.

Is it possible that Lomachenko, 31, DIDN’T know that his promoters at Top Rank Boxing contacted the WBC to ask for him to be made the Franchise champion? It’s difficult to imagine Top Rank making this move without speaking to Lomachenko first to ensure he’s in agreement, but anything is possible. Top Rank isn’t the type of promotional company not to keep their fighters up to date on things.

“I’ve read an interview with [WBC president Mauricio] Sulaiman, and he said we filed a request to be awarded that Franchise champion title,” said Lomachenko to Lomachenko Official TV.

“I would like to make it clear that I DID NOT file anything, and no one asked for it. I did not ask to be awarded with this title, and we did not write any letters. When I read that interview, I was very surprised,” said Lomachenko.

Lomachenko is denying that he or anyone else asked for him to be made the Franchise champion with the WBC. He’s under the impression that the WBC picked him out to give him this honor, and it’s something that was asked for by his side.

Sulaiman: Lomachenko was very appreciative of being given Franchise tag

“I think it’s secondary. The fact is he understands and he knows it and is very appreciative, but I don’t know what the interview is all about. It is,” said Sulaiman when asked if Lomachenko fights the Richard Commey vs. Teofimo Lopez fight would be for the undisputed lightweight championship. “He is the WBC champion. It’s a technicality that is going to take time to understand, to give it and to shape it.

“There’s a lot of fuss about there being no undisputed, but I think it’s more important for the highest fighter to be able to compete against other champions in other weight categories against the fact of the impossibility of being on this being undisputed. I don’t know if I’m making sense.

“There have been during the history of the sport very few undisputed champions. Why, because the mandatories get in the way, and they get stripped. So this is a solution for that side of the rules, which serve very well in general. But they do a disservice to the sport in the very few cases. We are the ones that invented the mandatory designation and the mandatory challenger.

‘The WBC invented that, because Sonny Liston. So many fighters waited five or six years to fight for a title. But there are certain fighters that make an era. Canelo [Alvarez] is one, and Lomachenko is another. They make the era of today, and they want to make the best fights and continuously will be fighting. So, we’ll see,” Sulaiman said.

So, Sulaiman is saying that Lomachenko was “VERY APPRECIATIVE” of being given the Franchise tag, and he doesn’t understand why he’s saying what he’s saying. Is Lomachenko reacting this way due to the negative backlash he’s getting from boxing fans about him being made the WBC Franchise champion?

Lomachenko can still be undisputed despite Haney being WBC champion – Sulaiman

“[Devin] Haney is the lightweight champion, but you’re digging into areas where there can be confusion, which is good,” said Sulaiman in discussing WBC lightweight champion Devin Haney. “But what I’m saying is Haney is a young fighter who is making his way very strongly. So if you want to confuse it, there is confusion, but it is a positive confusion. Let’s see Haney fight that fighter or let’s see Lomachenko fight. It’s two great fights. That’s what we want, the best fights.

It’s a confusing mess. Lomachenko’s Franchise belt is viewed as a lesser title in the eyes of a lot of boxing fans, because it was GIVEN to him and not WON in a fight. It’s like being given an honorary degree by a university. You’re not going to get a job with that degree over someone that has earned a four-year degree.

“We DO NOT ask fighters to become Franchise. One of the possibilities of a Franchise is the possibility to move up and down. I don’t think that would be a situation. If he [Wilder] requested, the WBC would vote it, but it’s one of the main elements, the ability to move up and down. And again, he [Wilder] has his opinion, and he’s welcome to have his opinion.

“It’s unnecessary to have a WBC champion in contradiction with something that he’s not familiar with, but I respect him, and I love Deontay. He makes us proud, and he’s active. He’s fighting [Luis] Ortiz, and if he wins, he’s fighting [Tyson] Fury. So the Franchise does not really apply, because he’s doing the fights that people want to see.

“Absolutely, any time you have a good heavyweight in the ring, there’s the possibility of anything happening,” said Sulaiman when asked if there’s a chance Wilder could lose his WBC title to Luis Ortiz this Saturday night. “Ortiz can punch, and Wilder can punch. So it’s going to be a great fight. I’m here to take the punches, as long as there’s no low blows,” said Sulaiman.

So there it is. The WBC doesn’t give the Franchise tag to special fighters without them or their promoters asking for them to be considered for it. Someone asked for it from Lomachenko’s team for him to be given the Franchise tag. Why doesn’t Loma know that?