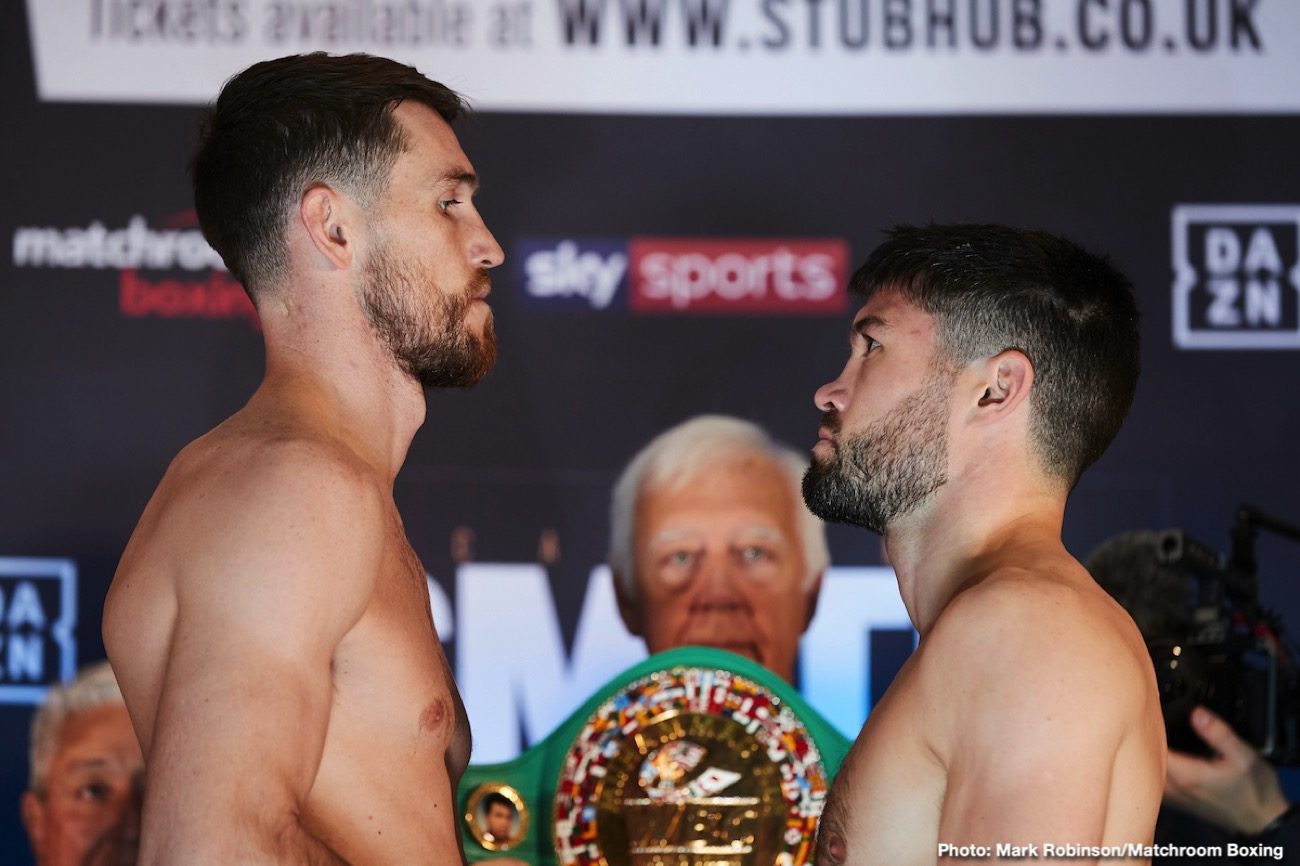 By Charles Brun: A gaunt-looking Callum Smith (26-0, 19 KOs) weighed in at 167.4 pounds at the weigh-in on Friday for his defense of his WBA Super World super middleweight title against mandatory John Ryder (28-4, 16 KOs) on Saturday at the M & S Arena in Liverpool, England. Ryder weighed in at 167.4 lbs. as well.

The two fighters had a long intense staredown immediately after both weighed in, and neither of them were willing to break it off. Finally after what seemed like an eternity, they turned away.

One could sense a lot of competitive spirit with both of them. The emotionless looking Smith showed was hard to read, but you could still tell that he’s excited about this match. He’s facing one of his fellow countryman in 31-year-old Ryder, who has on his last 4 contests by knockout.

Callum needs an impressive victory against Ryder to improve his chances of getting a career-defining fight against one of the following fighters:

“Those guys have been waiting for a world title for a long time, and it’s finally come,” said Hearn to IFL TV about Ryder and his team. “It’s not a guy that we picked from Matchroom. He’s a mandatory challenger, and he’s won two final eliminators.

“He’s had a brilliant knockout streak as well, and he really fancies this,” said Hearn about Ryder. “Sometimes you get in a situation where people are talking about the next fight, and the next fight after that.

Callum hasn’t overlooked the 5’9″ Ryder, but even if he has, he’s got the talent to make easy work of him. The size, and the punching power of the 6’3″ Callum should carry him to an early victory.  Ryder will need to get in close for him to land his power shots, and it’ll be interesting to see if he can survive for long in that space.

“He’ll be trying to prove that on Saturday. Callum Smith is at the stage of his career where he’s made a lot of money, he’s the #1 super middleweight in the world, and he wants those career-defining fights.

“This fight is about having a homecoming. He’s been boxing around the world. The great news for fight fans is he’s not taking a guy at 15, who just happens to be cheap, and we brought him in for a homecoming,” said Hearn.

Ryder has everything to gain and nothing to lose against Callum, and he’s not going to hold back against him. Callum has got to be ready for Ryder to be charging him full bore from the opening bell, because that’s the only chance he has. If Ryder stays on the outside, Callum will talk him down and take him out quickly.

The only fighter that has had any degree of success against Callum during his career is Nieky Holzken, and that was because he was so unorthodox. Holzken doesn’t come from a boxing background, and was difficult for Callum to figure out.

Callum has got a proper fight – Hearn

“This is a proper fight on Saturday night. With the timing, when the mandatory come up, we weren’t like, ‘Oh, can we get around that.’ Look, I felt to myself that we get a lot of criticism for big fights, domestic title fights going on pay-per-view.

“So this was an opportunity to go on a Saturday night fight night with London against Liverpool for plenty of marbles with the super middleweight world championship.  And so we put our necks on the line, stuck the money up, and we went for that.

Smith won’t improve his status as the #1 fighter at 168 unless he destroys Ryder in the first couple of rounds. Boxing fans outside of the UK have never heard of Ryder, and they’re going to notice straightaway the disparity in size between the two.

It’s going to take a fast knockout for Callum to come out of this contest in flying colors. He can probably do that. Ryder was knocked out in 7 rounds by Nick Blackwell in 2015, and that was against domestic level fighter.

Callum could face Canelo, Saunders or Jacobs-Chavez Jr. winner next

“So if Callum wins, Canelo, Danny Jacobs vs. Chavez winner,” said Hearn when asked who Callum Smith could face next if he beats Ryder on Saturday. “Particularly Billy Joe Saunders. You got Billy and Callum, they both want to fight Canelo or GGG or one of those guys.

“If they can’t get that fight next, then they really have to fight each other, because that’s a big super middleweight unification fight between two Brits. How often does that happen? So that’s a big, big fight.

“Billy and Callum, and Demetrius and Jacobs, they’re all at the stage now where they want, not just paydays, but big legacy, career-defining fights, and you’ll see them in them in 2020. But Callum has a very, very tough fight. You saw Billy Joe the other week against Ceceres. He didn’t have the best preparation.

“I felt like he needed a knockout to win, and he pulled it out of the bag. John Ryder is a different animal to Coceres. I know Callum has trained hard, and they’re taking the threat of John Ryder very seriously,” said Hearn.

It’s not likely that Callum will get a fight against Canelo Alvarez, Daniel Jacobs or Julio Cesar Chavez Jr. You can forget about Gennadiy Golovkin as well. The only fighter that Callum has any chance of facing next among the guys Hearn named is Saunders. 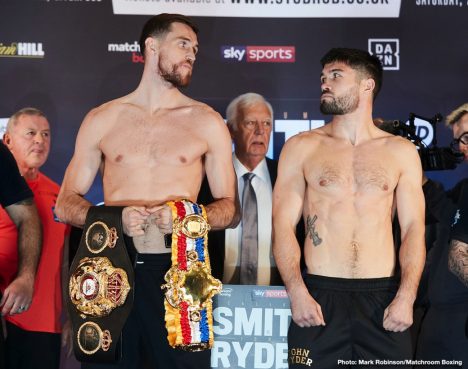 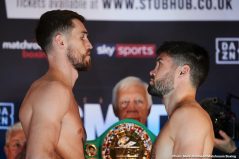 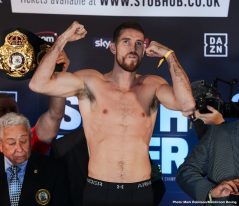 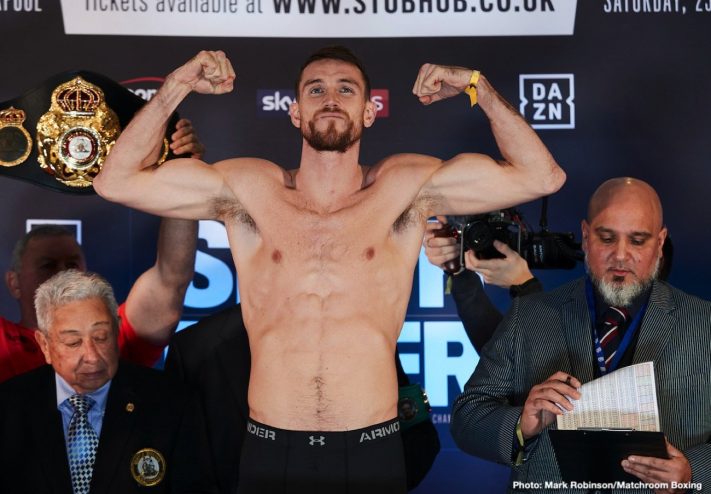