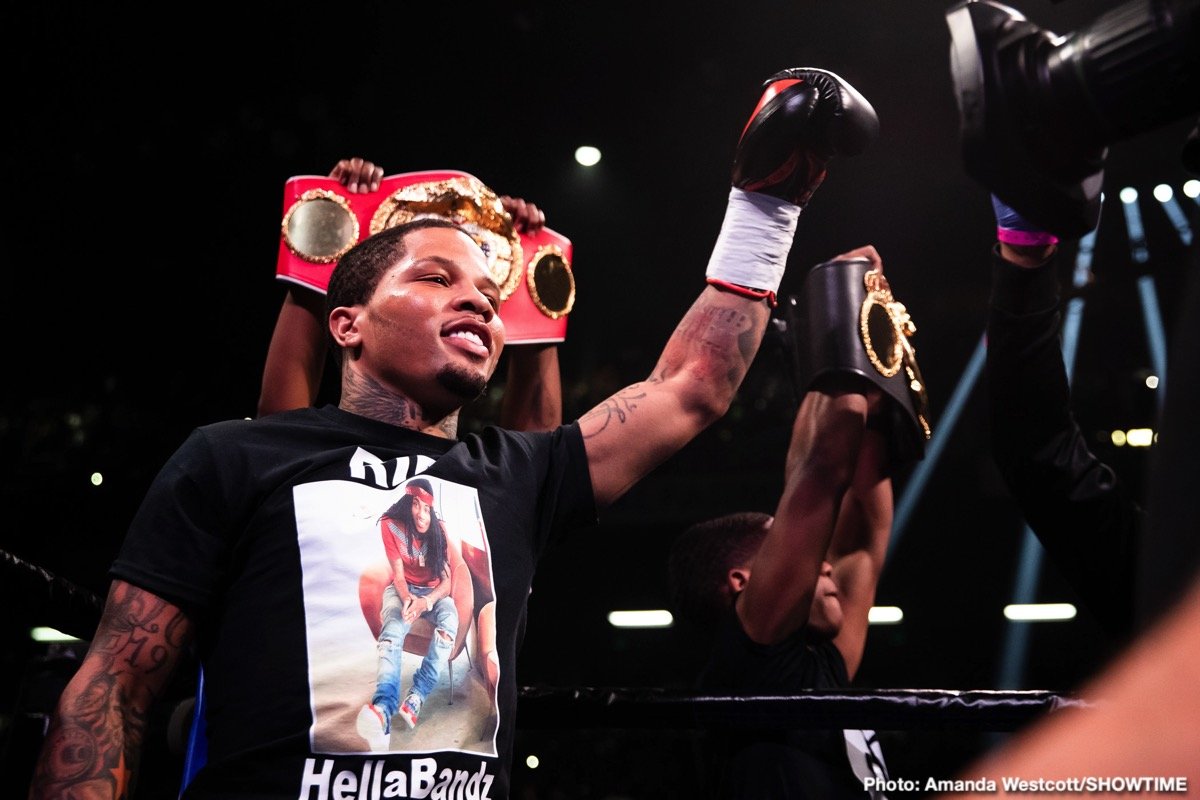 By Chris Williams: Gervonta ‘Tank’ Davis’ trainer Calvin Ford talks about the WBC giving Vasiliy Lomachenko their Franchise tag, and he has some interesting things to say about Devin Haney sparring.

Ford is getting former IBF/WBA super featherweight champion Davis (22-0, 21 KOs) ready for his fight against Yuriorkis Gamboa (30-2, 18 KOs) on December 28 on Showtime at the State Farm Arena in Atlanta.  The 37-year-old Gamboa is getting what Ford calls one last opportunity, and he’s hoping he can take the punishment.

Ford doesn’t think too much about the World Boxing Council giving WBA/WBC/WBO lightweight champion Vasiliy Lomachenko their Franchise tag recently. He says that Lomachenko has stamina problems, and that he and his promoters are aware of it. It’s believed by a lot of fans that Lomachenko agreed to be Franchise champion so that he wouldn’t have to fight Devin Haney.

Ford discusses why Lomachenko was given Franchise tag

“He’s a Franchise fighter now,” said trainer Ford to Blue Blood Sports TV when asked about Vasiliy Lomachenko fighting Tank Davis. “It’s funny. Deontay Wilder didn’t want that crap. Go back to your old school. That’s what made boxing. You know, the walks, the big fights. I remember some great champions had some losses, but they were great big fights.

That’s sad if it’s true that Lomachenko took the Franchise tag because he’s got “holes in his gas tank” like Ford says. Haney would be a real problem for the aging 31-year-old Lomachenko, and so would Tank Davis.

The two-time Olympic gold medalist isn’t the same fighter he was six years ago. He’s starting to show age, and he’s taking punishment against guys like Jorge Linares, Jose Pedraza and Luke Campbell. Lomachenko is still winning, but he’s not able to get through the fights effortlessly anymore.

“Tank already has stepped up his competition. Everyone calls him out,” said Ford. “Just wait to the 28th, and we’ll see which one we’re going to pick. It’s because the excitement that he brings. Look at Mike Tyson at a young age. Tank is Tank. When Floyd was doing his thing, he was that guy.

“Now it’s Tank. Everyone likes his swag. When he gets in that ring, he puts on a show. I can’t wait till the 28th. Is Gamboa willing to take that kind of punishment? And I think he is. Yes, that was the truth,” Ford said about the sparring session between Gervonta and Devin Haney needing to be stopped because ‘Tank was too much.’ “The second one, I wasn’t there, so I don’t know.

“Tank told me that Floyd was holding him back, but I wasn’t there. But my little man [Gervonta] told me, and he’s not going to tell me just anything. We don’t tell what happens in the gym,” said Ford when asked if Tank Davis dropped Haney in the first sparring session.

“We don’t do that. But I know that Devin Haney’s dad said, ‘He’s the truth.’ He said that. I’m glad Devin Haney’s dad came through, because we couldn’t find anybody to spar Tank at the time. He came and put in some work.

Haney isn’t much of a puncher, so it wouldn’t be surprising if Tank Davis worked him over in sparring. Devin is more of a speed guy in the mold of Floyd Mayweather Jr. He’s never going to be able to stand in the pocket and outslug a guy like Davis. Haney needs to hit, and move for him to be effective. Pressure fighters like Davis would be a nightmare for him.

“We noticed that Tank is getting stronger,” said Ford. “He’s hurting my hand. He’s poking holes through the body suit. That’s how hard he hits. So we haven’t even seen the best of Tank yet. Wait until the 28th. We’re going to pick which one we’re going to fight. As a matter of fact, the fans are going to pick. It’s about numbers.

“I know Farmer is a businessman. I’m sure he wants to get his just do, because you never know what’s going to happen inside the ring. Again, we’ll see. I’m not the one that handles those guys. I just get them ready for the fights. That’s what we do,” said Ford a potential opponent for Tank Davis’ next fight.

Gervonta just turned 25 on November 7, and this is usually an age where fighters are in their prime. It would make sense that Davis is hitting hard now that he’s in his mid-20s. That’s bad news for Devin Haney and Lomachenko, because he’s nearing the zenith of his career. If it’s true about Tank Davis having gotten the better of Haney in sparring, then that’s not good for that he’s getting stronger.

Is Gamboa willing to take the punishment?

“The company [Golden Boy] aren’t going to put their young dogs on the front line right now,” said Ford when asked about Ryan Garcia and Tank Davis. “Let’s look back. The only person that put their young dog on the front line was with Floyd [Mayweather Jr.], and that was because it made sense. It made dollar sense. Like I always say, if the money is right, the fight is right,” said Ford.

Gamboa was stopped in seven rounds by Robinson Castellanos two years ago in 2017, and he’s done well since then. Castellanos isn’t nearly as talented as Tank Davis, and Gamboa was getting beaten up by him through seven rounds. Terence Crawford also stopped Gamboa. It’s likely that Gamboa will give up if he starts taking too much punishment. In theory, Gamboa should be able to hang in there for 3 or 4 rounds before he’s stopped. But he’s not likely to hang in for long if he’s taking one-way punishment.