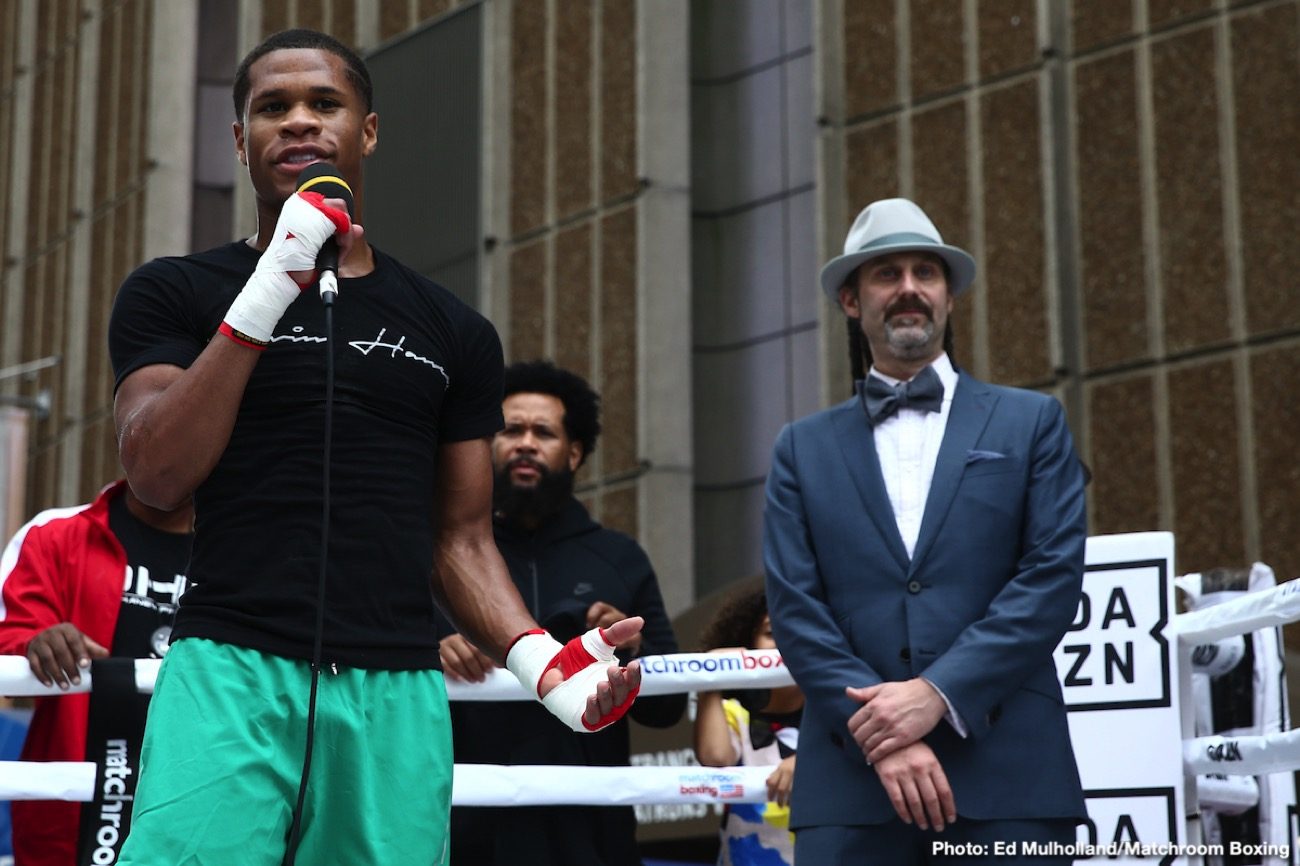 By Sean Jones: Devin Haney (22-0, 14 KOs) will be going after the interim WBC lightweight title this Friday night on September 13 against Zaur Abdullaev (11-0, 7 KOs) on DAZN at Madison Square Garden in New York.

*** Watch Haney vs Abdullaev live on DAZN in the US on Friday – Click here to sign up! ***

The winner of this fight between #2 WBC Haney and #3 WBC Abdullaev will be the mandatory for WBC lightweight champion Vasiliy Lomachenko. However, only Abdullaev has a real shot at getting that fight, a Lomachenko’s promoter Bob Arum of Top Rank Boxing has made it known that he’s not going to match Loma against Haney in 2019 or 2020. Arum thinks Haney needs more experience, and beating Abdullaev isn’t going to be enough for him to fulfill that requirement.

Lomachenko is going to be fighting the winner of the Teofimo Lopez vs. Richard Commey fight in early 2020 for the undisputed lightweight champion. Loma is going to then vacate, and go back down to super featherweight. what this means is that a fight between him and Haney may never happen. Haney says he’s going to be moving up to 140 soon.

So basically would put two divisions between him and Lomachenko. The two-time Olympic gold medalist Lomachenko has not shown a desire to fight any of the fighters at 140 due to their greater size. Once Haney is fighting at 140, that pretty much rules out him ever fighting Loma. However, Haney isn’t all that worried about it. He feels he’s going to have a great career even if he never fights Lomachenko.

“I’m definitely looking forward to this fight. I means so much to me, especially fighting at Madison Square Garden, ” said Haney to Matchroom Boxing. “I’m getting stronger, and faster. My performance on September 13th will show. My sparring has been crazy as usual. I’m ready. Knowing that the winner will be fighting for a world title means so much. Abdullaev won’t be taken lightly at all. With so much at stake with the winner fighting for a world title, it means a lot.

I know that Abdullaev will bring his all. I know he’s going to come to fight, and I know he’s going to lay it all on the line. I’ve seen a little of Abdullaev, but not too much. A guy can watch me all day long, and a totally different Devin Haney comes out on the night of the fight. So I try not to watch too much. I think he’s a tough, rugged opponent, and I think he’s going to go in there and try and put the pressure on me to break me down mentally as well as physically,” said Haney.

This fight means a lot for Haney, because it ensures that he’ll win a piece of the WBC lightweight title. The fight gives Haney a foothold to force a fight against Lomachenko if he decides to stay at lightweight for any length of time. He probably won’t stay in the weight class, but if he does, he’ll need to defend against Haney.

For some reason, Lomachenko’s promoter Bob Arum isn’t keen on him facing Haney. That’s too bad, because once Haney is at 140, his career will take off. In the meantime, Lomachenko is going to age more, and likely start losing. If Arum decides to make the Lomachenko-Haney fight in two to five years, it won’t be good for Lomachenko. Arum will be kicking himself for not making the fight when Haney was just 20-years-old, and still inexperienced.

Abdullaev will have Haney’s entire focus on Friday

“So I’m going to be ready for whatever he has, and whatever he brings,” said Haney. “Him saying he wants to silence the hype, and dethrone me in Vegas. That’s expected coming from him. I know he’s going to go in there and give it his all. He can talk as much as he wants. His coach can’t fight for him. So when we go in there on September 13th, all the talk will be done, and we’ll see who will be talking when the bell rings,” said Haney.

“I knew this day would come when everybody would talk about me. I remember when no one was talking about me, and I was wondering, ‘What am I doing wrong? What do I need to do for the whole boxing world to know who Devin Haney is.’ So I just worked hard, I paid my dues, and now the time has finally come. Now it’s time for me to rise to the occasion, and show that Devin Haney is the truth. My last performance was my best, and I was very pleased with it. So this time I’ve got to go in there, and I have to try and outdo my last performance,” said Haney.

There’s no way that Haney will overlook the 25-year-old Russian Abdullaev. Although Abdullaev hasn’t beaten anyone of note other than journeyman Hank Lundy, he’s still not going to be overlooked by Haney.

📝 #HaneyNYC fight week kicks off tomorrow with our public workout outside the legendary @TheGarden! 🏟

Haney doesn’t care if he doesn’t ever fight Lomachenko

If I don’t get a chance to fight Lomachenko during my career, it’s fine. I don’t need Lomachenko. Lomachenko doesn’t make or break me. It’s okay. My time will come. I’m only 20-years-old. I have a long road ahead of me. I’m okay if I don’t get a chance to fight Lomacheno. Of course, I would love to, but if I don’t, it’s okay. I feel that I’m ready for a world title shot. I’m at the breaking point in my career where everything is about to take off,” said Haney.

It hurts Lomachenko more than it does Haney if the two of them don’t fight. Lomachenko is 31, and still not a big star in the U.S. Haney is only 20, and is capable of moving up to 140 and 147. That’s where the real money is at, not at 130 or 135. So, it’s a self-defeating move on Top Rank’s part if they never let Lomachenko fight Haney if they wait too long. Lomachenko is already starting to show signs of age and ring wear at 31. Just imagine what it’ll be like by the time Top Rank gives him the green light to fight Haney.

“After this fight, I’m going to be fighting for a world title or I’m not, but I will be up there with the top guys,” said Haney.  “I will be mentioned with every top guy in my weight class, whatever weight class I go up to, even if I go up to 140. 135 isn’t the easy weight class for me to make. I won’t stay there too much longer. If I can’t get a world title, I’ll move up to 140. I’m a big 135 pounder.

Haney will get a title shot at 135, but likely not until 2021. It’ll be up to Haney, and Matchroom whether they want to until 2021 to fight for the WBC lightweight. Considering that the 135-lb division is completely barren of popular fighters, Haney would be better off moving up to 140 now. It would save him a year of his career being put in the deep freeze by Lomachenko and Top Rank. That’s a waste of time for Haney. He should move up to 140 now, and take on the bigger names like Regis Prograis, Joshua Taylor and Jose Ramirez.

Eddie Hearn views Haney as the next big star in U.S

“He has the skills to burn,” Haney promoter Eddie Hearn of Matchroom Sport said. “He has all it takes to be the next biggest fighter in the United States.”

Haney can be the next big star in the U.S, but it’s not going to happen in the lightweight division. He’s going to have to move up to 140 at the minimum, and preferably 147. There’s only limited options for Haney at 140.

Haney beats Abdullaev by a 6th round knockout. Abdullaev is a good fighter, but he’s not on the same level as Haney.