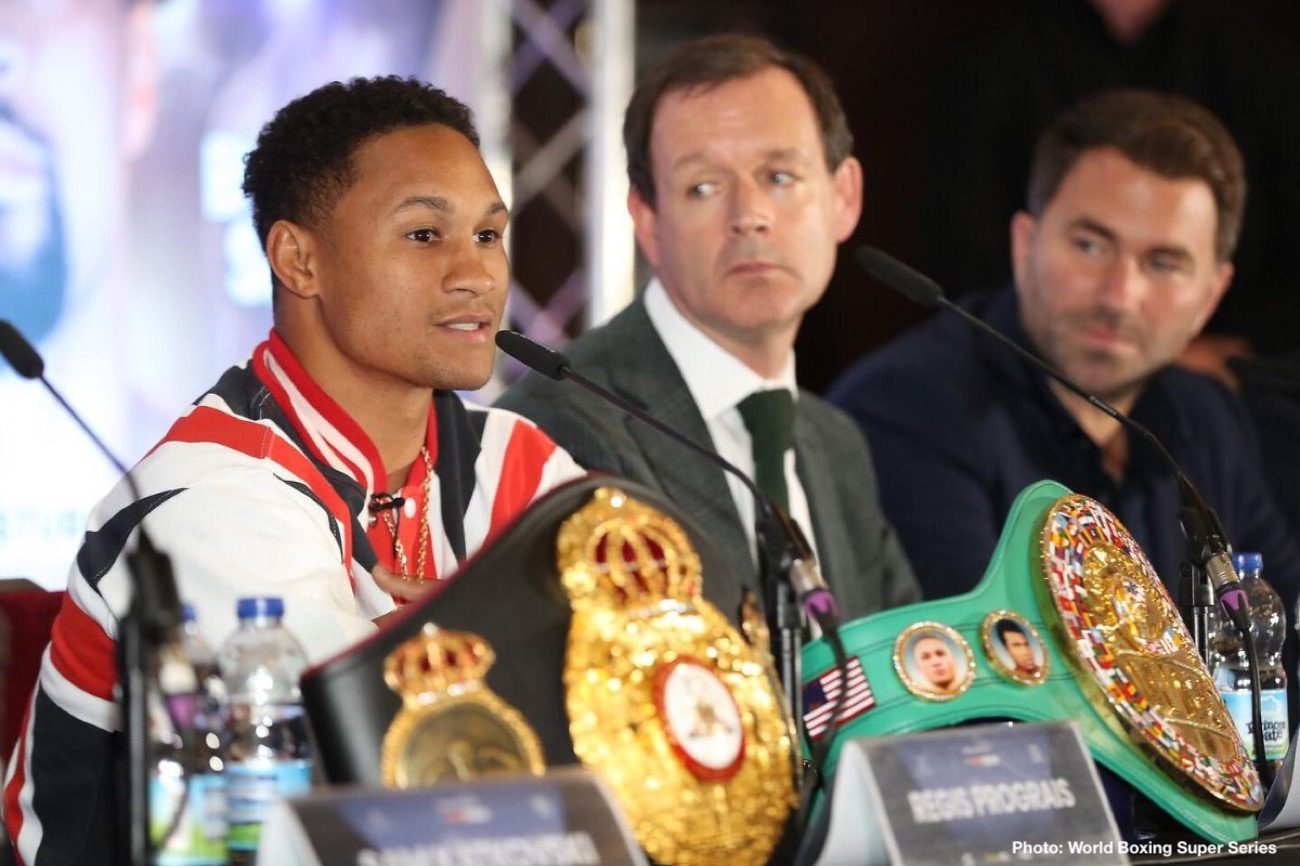 By Charles Brun: Commentator Adam Smith says he told Dereck Chisora to not show “disrespect” to the other fighters on the October 26th card at the O2 with his emotional outburst during Monday’s press conference.

While talking to Hearn, Chisora used expletive-laden language while insisting on getting more money for fighting on the undercard instead of the main event.

Chisora (31-9, 22 KOs) is fighting former WBO heavyweight champion Joseph Parker (26-2, 20 KOs) in the co-feature on the Regis Prograis vs. Josh Taylor card on Sky Box Office at the O2 Arena in London, England. The reason WBA light welterweight champion Prograis and IBF champion Taylor are fighting in the main event is because they are considered #1 and #2 in the 140-lb weight division. They’re also fighting in the final of the World Boxing Super Series tournament. Both of them are world champions.

Chisora vs. Parker won’t have a world title on the line, as neither of them are belt holders, and they’re not in a position to fight for a title unless they were given a voluntary shot.

“It’s an interesting press conference with Del Boy around, isn’t it?” said Adam Smith to IFL TV about Monday’s news conference in which Chisora erupted. “It’s a difficult one, isn’t it, because Regis Prograis and Josh Taylor is a wonderful fight. It’s the #1 and #2 in the world. I cannot wait for that, and you cannot wait. All the hardcore boxing fans put that as #1, but we all know the casual fans like a big heavyweight brawl. It’s not just a heavyweight brawl. It’s two really good contenders still. Dereck Chisora is re-firing with his career in the last year,” said Smith.

“That great win over Artur Szpilka last time, and Joseph Parker is right in the mix, even with those two loses to Anthony Joshua and Dillian Whyte,” said Smith. “He’s up and running again. He was signed by Matchroom. It’s a great fight. They’re both great fights. It’s terrific for the fans. You’ve got [Ricky] Burns and [Lee] Selby. You’ve got Lawrence Okollie, and you’ve got Conor Benn. It’s going to be a wonderful night on October 26th,” said Smith.

“I looked at him and saw the vibe, the bubbling going. I thought, ‘oh, oh, let’s hope he stays sitting’. Fortunately he did. As far as Derek is concerned, that was kind of his best behavior, no tables got thrown,” said Chisora’s manager David Haye to Sky Sports.

“I’m not too bothered about who wants to be called main event, and who doesn’t,” said Smith. “It’s a great night for the fans. If people think Chisora-Parker is or Taylor-Prograis, then good for them. I said to Dereck, don’t show disrespect for the other guys, because he’s not like that. He loves fighters. Of course he does. He was making a point.

That’s up for him and Eddie [Hearn] to sit down, but I’m sure he’s getting well paid, and I’m sure if he wins the fight, he’ll get a world title shot or something bigger. The key for Dereck is to keep that form going. Mentally and physically he looked great against Szpilka. He put in a great performance against Dillian Whyte almost a year ago now. It’s an Indian summer for Dereck Chisora. He shouldn’t ruin it, but he’s unpredictable. That’s why we all watch him,” said Smith.

Chisora said he wants more money to fight Joseph Parker on the undercard of the Prograis vs. Taylor card next month. He said he’ll pull out of the card. It’ll be up to Hearn to make Chisora happy. But it’s understandable why Chisora-Parker is the undercard fight.

Both guys were recently beaten by Dillian Whyte, and there won’t be a world title on the line for their match on October 26. In contrast, Prograis and Taylor are unbeaten world champions fighting in a unification fight in the final of the WBSS tourney. Their fight ticks all the boxes in terms of what promoters are looking for in a headliner fight.