Munguia moving to 160 after next fight with Allotey 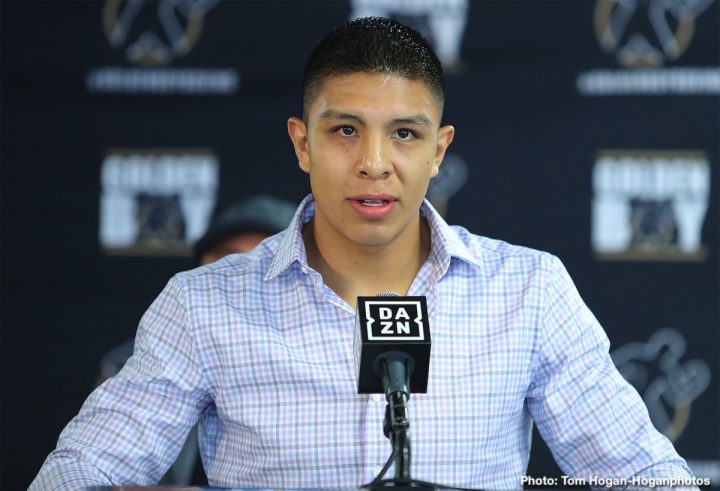 By Sean Jones: Jaime Munguia will be fighting for the last time at 154 when he defends his WBO junior middleweight title on September 14 against fringe contender Patrick Allotey. The unbeaten 22-year-old Munguia (33-0, 26 KOs) has outgrown the 154 pound division, and he’s now moving up to 160 to go after the lions in that weight class.

Munguia will be facing Allotey (40-3, 30 KOs) on DAZN on September 14 at the Dignity Health Sports Park, in Carson, California.

Munguia’s promoter Oscar De La Hoya of Golden Boy Promotions says he doesn’t want to throw him in with the likes of Gennady Golovkin right away. He wants to have Munguia wait two years, and then match him against GGG if he’s still fighting. For the record, Golovkin will be 39-years-old in two years. It’ll be interesting to see if De La Hoya lets Munguia fight GGG at that time or if he waits for another year or two.

Munguia will be fighting for the first time with new trainer Erik Morales, who is teaching him a lot of new things to help him improve. Morales is a former four division world champion, and a true boxing great. He wants to have Munguia fight more aggressively, and not waste time trying to box. That was a mistake that Munguia made in his last fight against Dennis Hogan last April, and he made the contest harder than it should have been.

At the end of the day, I’ve decided to train with Erik Morales. He’s a good trainer. He was a great fighter, and he knows a lot of things. So that’s why we decided to train with him. We made some adjustments about keeping my hand up, moving my head, and moving from the waist. I’ve learned a lot of things, and I’ve been making a lot of adjustments to keep advancing,” said Munguia.

Munguia has got the right guy in front of him to blitz early in 28-year-old Allotey, who has been knocked out by Patrick Teixeira and Charles Manyuchi in the past. It would be a mistake for Munguia to leave the heavy-handed Allotey around for too long, because he could do some damage with his power shots.

This is a good showcase fight for Munguia to display his newly learned boxing skills from trainer Morales. It was a smart decision by Golden Boy and promoter Fernando Beltran to have Munguia face Allotey rather than putting him back in with Dennis Hogan. Munguia isn’t ready to be fighting the likes of Hogan yet, as we saw last April when he beat him by a questionable 12 round majority decision in Monterrey, Mexico.

Munguia says Golovkin fight was offered to him

“The fight was presented. For whatever reason it didn’t take place, and wasn’t completed, but the proposition was there,” said Munguia about being offered a fight with Gennady Golovkin.

There was interest from Golden Boy in putting Munguia in with Golovkin (39-1-1, 35 KOs) in September of 2018 while Canelo was under suspension, but the contest wasn’t approved by the Commission. Recently, Golovkin’s name has popped as a potential foe for Munguia on DAZN. Given that Canelo has no interest in fighting GGG right now, it would have made sense for Golovkin to face Munguia. Both guys are with DAZN, and it would have made the streaming giant happy to have them fighting on the Cinco de Mayo holiday. Even though Munguia is still an inexperienced fighter, there would have been a great deal of interest from boxing fans in a Golovkin fight.

De La Hoya says he’s glad that they didn’t make the Golovkin-Munguia fight, because it wouldn’t have been fair to his promoters to make that match-up this early in his career. With Golovkin still viewed as the #1 middleweight in the division in the eyes of many boxing fans, Munguia would have walked the plank if he’d been matched against him at this point.

Even if De La Hoya waits two years for Golovkin to age more, Munguia will still likely be too green to be matched against such a skilled fighter. Munguia didn’t have a long amateur background that Golovkin had, and he’s someone that is learning on the job as a pro.

Munguia fighting for last time at 154

“I think think this will be my last fight at 154 pounds,” said Munguia. “I’m thinking of moving to 160 pounds. Whether I fight a Canelo or Golovkin, I really don’t know. That’s something I’ve talked a lot about with my promoters. What I’d like to do is have one or to fights, and then look for the big names,” said Munguia.

Munguia is too big for the junior middleweight division right now for him to continue to fight in that weight class. He reportedly rehydrated to 175 pounds recently for one of his title defenses, and that’s way too big for a junior middleweight. Golovkin rehydrates to around 173 pounds for his fights at middleweight. You get the picture. If Munguia stays at 154 for much longer, he’d have to face one of these guys:

“We know that Allotey is strong, fast and has a lot of knockouts. We will have to be very careful about that. But, I’ll be looking to give a great show, and I’ll look for the knockout on Sept 14.” @jaimemunguia15 #MunguiaAllotey Sept 14 @DignityHealth pic.twitter.com/rViYeXhh55

“He’s going to have this weekend for himself,” said Golden Boy Promotions CEO Oscar De La Hoya to Fino Boxing about Munguia fighting on the Cinco De Mayo holiday weekend on September 14. “He knows what he has to do. He’s not going to have a walk in the park. When we had the date available, we instantly thought of Jaime Munguia, being from Tijuana and being willing to fight anybody put in front of him. Having a new trainer in Erik Morales, and getting his style back to a more in your face aggressive style, we’re expecting a war,” said De La Hoya about the Munguia vs. Allotey fight.

“Jaime Munguia throws every punch with bad intentions. Allotey is a fighter from Africa, and you know the African fighters are like Azumah Nelson and Ike Quartey. Those fighters come out to swing for the fences. It’s going to be an exciting war. I was happy, because this is Jaime Munguia’s style. Jaime Munguia is a fighter who is strong, who wants to go forward, moves his head, but throws a lot of punches in bunches. Erik Morales has him; ‘Let’s go for a knockout,’ and that’s what I’m excited about,” said De La Hoya.

It’s good that Munguia is taking the September 14th date all to himself, because this is normally Saul Canelo Alvarez’s fight date. Surprisingly, Golovkin didn’t move in to take the September date for himself when Canelo choose not to fight then.  The only negative about Munguia fighting on that date is less than stellar opponent Allotey.

This isn’t a great challenger for Munguia, and Golden Boy should have opted for someone with more talent like Adames. But with the way Munguia looked in his last fight against Hogan, it’s not all that surprising that he’s being matched against Allotey.

The criticism that boxing fans have about Munguia being matched weekly by Golden Boy is the fact that he’s a world champion. If Golden Boy feels that Munguia needs more experience before facing the talented fighters, then he should have never become a world champion. Holding a title, and facing weak opposition continually is a bad look for Munguia.

Munguia has defeated these fighters in title defenses:

“I’m actually glad he didn’t take the GGG fight,” said De La Hoya about Munguia opting not facing Gennady Golovkin. “He’s only 21, and he’s young. He’s the next guy. So why throw him in with those lions now? It wouldn’t have been fair for us or for his promoters in Mexico. So everybody did a great job to make sure Jaime Munguia develops. Wait a couple of years. Wait until September 14th, and you’re going to see the development and the strength. He hasn’t even grown his man strength, which is incredible. If GGG is around in a couple of years, then yeah, we’ll throw him in with the lions, and we’ll see what happens,” said De La Hoya.

De La Hoya might want to pull the trigger on the Golovkin vs. Munguia fight sooner than two years if he wants to make that match-up happen. GGG might not be around in two years, and Munguia’s career could implode at 160 against the top dogs. Hogan and Liam Smith showed that Munguia is a limited fighter, who wins his fights based on his size advantage. That size advantage will evaporate for Munguia when he move up to middleweight. As such, Munguia needs to fight Golovkin sooner rather than later if he wants the payday before he starts losing to the top contenders at 160.

“Actually, why not?” said De La Hoya when asked if he’d be willing to match Munguia against Saul Canelo Alvarez. “Jaime Munguia is a fighter who is willing to fight anybody. He’s not afraid of nobody. He wants to give the fight fans the best fights possible. So if both fighters are at 60 at the time, and the right time, then why not make the fight,” said De La Hoya about a fight between Canelo and Munguia.

This is another fight that Munguia should take as soon as he can, because it might not be there for him later.