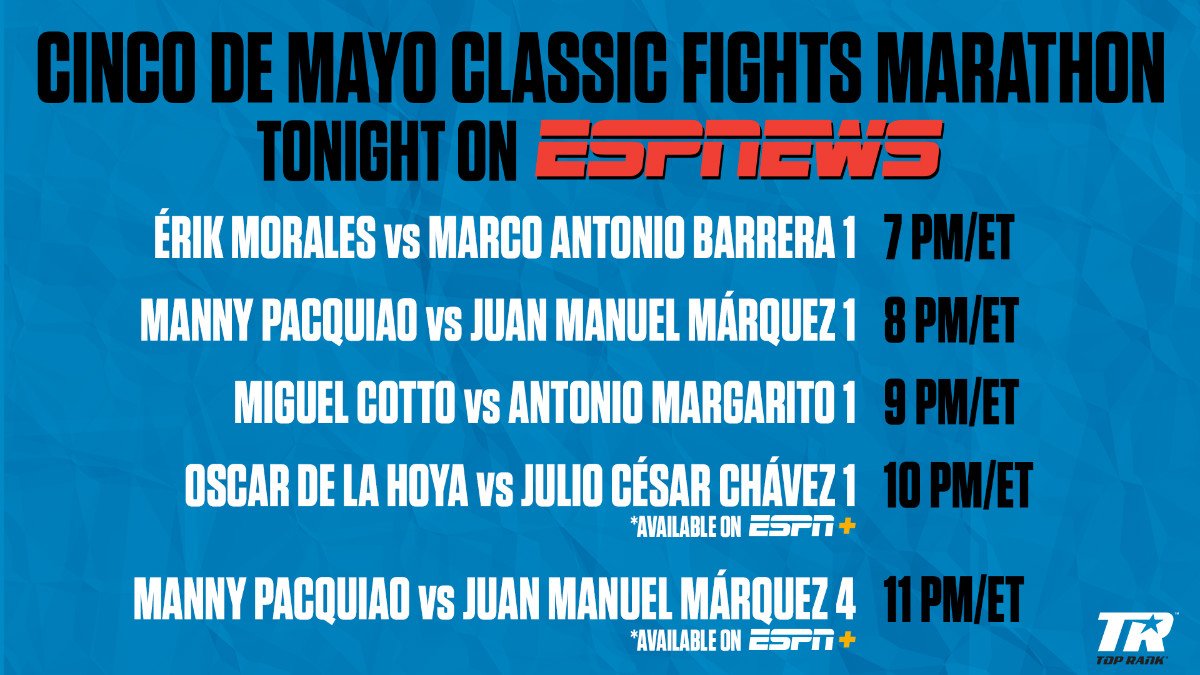 Tonight, May 5, will be a night of boxing on ESPNEWS when the network airs five consecutive hours of the sweet science featuring some of the sport’s greatest grudge matches. The action will begin at 7 p.m. ET with the epic first fight between Mexican legends Érik Morales and Marco Antonio Barrera.

The special presentation will include an interview from ESPN’s Joe Tessitore with unified WBC and WBO super lightweight champion, José Ramirez. During the interview, Ramirez talks about what he is doing in his community in support of Covid-19 relief and what he is doing to stay in fighting shape. The interview will air approximately 10 p.m. ET.

Érik Morales vs. Marco Antonio Barrera 1: This super-bantamweight unification fight saw WBC world champion Morales put his belt on the line against WBO world champion Barrera. In the Ring Magazine’s Fight of the Year for 2000, the two combined to land 618 punches. Round 5 was named Round of the Year by Ring Magazine, and Barrera and Morales would fight twice more over the next four years in what is considered one of the greatest trilogies in boxing history.

Miguel Cotto vs. Antonio Margarito 1: Puerto Rican superstar Cotto had made four successful defenses of his WBA welterweight world title when he faced Mexican bruiser Margarito for the first time in 2008. Cotto dominated the early rounds, but Margarito came on in the later rounds in what turned out to be a dramatic, bloody ending.

Oscar De La Hoya vs. Julio César Chávez 1: A crowd of more than 15,000 packed the outdoor arena at Caesars Palace for this June 1996 battle between WBC super lightweight champion Chávez and De La Hoya, a 1992 U.S. Olympic gold medalist seeking a world title in a third weight class. A cut in the first round drastically changed the course of the fight.

Manny Pacquiao vs. Juan Manuel Márquez 4: More than eight years after their first matchup, no major world titles were at stake. Pacquiao held a 2-0-1 series lead, but their fourth matchup was one of the most brutal fights of the 21st century. It ended suddenly, with one of the most devastating one-punch knockouts the sport has ever seen. The pay-per-view event generated 1.1 million buys and a live gate of almost $11 million.

ESPN+ features a library of hundreds of the most important fights in boxing history, as well as recent Top Rank on ESPN fight cards for replay, all streaming on demand. The historic conflicts on ESPN+ include legendary heavyweight showdowns like Ali vs. Frazier III, Ali vs. George Foreman, Joe Louis vs. Billy Conn, Tyson vs. Holmes, Jack Dempsey vs. Gene Tunney, Max Baer vs. James J. Braddock, Ali vs. Sonny Liston I & II, Wilder vs. Fury II and many more.


« Benavidez Sr: says ‘Canelo is WORN, not the same fighter’