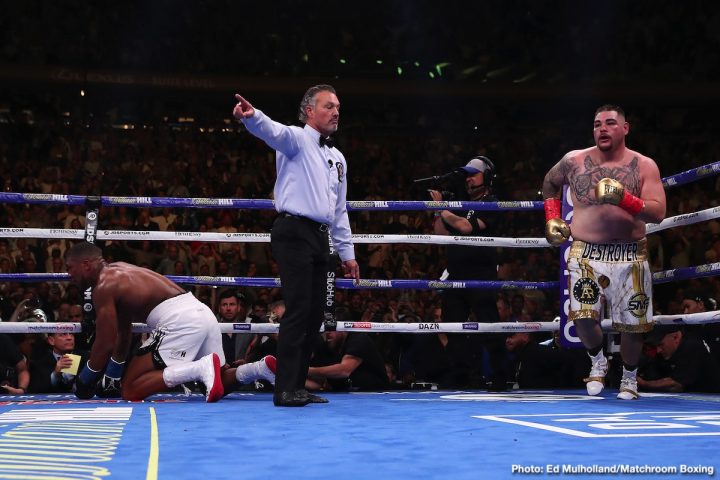 By Mark Eisner: Anthony Joshua is blaming his defeat to Andy Ruiz Jr. on a “lucky punch” the California native landed in the third round on June 1 at Madison Square Garden in New York. Joshua freely admits that he made a calculated error in trying to finish off Ruiz quickly after dropping him. AJ got careless, and left himself open for a counter.

Moments after Joshua knocked Ruiz down with a left hook, the Mexican warrior got back to his feet, and landed a hard left hook of his own that wobbled AJ. In hindsight, it’s obvious that Joshua should have taken his time, but he’d won so many fights in the past by pouncing on his hurt opponents to finish them with a flurry of shots. Joshua (22-1, 21 KOs) did the right thing in going after Ruiz, but he miscalculated how hurt he was.

“By a lucky punch. By a punch sent by the gods,” said Joshua to skysports.com in blaming his loss to Ruiz on a “lucky” shot last June. “Let me concuss Ruiz Jr., [and] he won’t get back up. I don’t know what a concussion is, but for sure, after the fight I didn’t know what round [the fight was stopped]. So I’m just shocked it took Ruiz Jr another four rounds to get me out,” said Joshua.

It’s a fair statement from Joshua that he would have knocked Ruiz Jr. out if he had him concussed. That goes for any fighter though. When a guy is as hurt as Joshua was in the third, they’re not going to last long against anyone. WBC heavyweight champion Deontay Wilder is someone that would still be lethally dangerous even when hurt due to his punching power.

AJ regrets not taking his time after dropping Ruiz

“Ruiz Jr got hit by a flash knock-down,” said Joshua in talking about how he dropped Ruiz in round 3. “He was still raw, he wasn’t well-done, he wasn’t cooked yet. I should have left him a little bit longer. But the instinct in me was: ‘Boom!’ I ended up getting caught with a left hook on the top of the head,” said Joshua.

In looking at the fight, if Joshua had taken his time after dropping Ruiz, who’s to say that he doesn’t gas out later and get stopped. Joshua’s second guessing of himself is useless, because he made the move that most fighters would have done. Wladimir Klitschko decided to play it safe after hurting Joshua in the sixth round in 2017, and it cost him the fight. Going by Wladimir’s mistake, it was wise for Joshua to try and finish Ruiz when he had him hurt.

“He ain’t that skillful. He’s a good fighter,” said Joshua. “Do what I did in round three, but with more silky skill. And that was easy to put him down. So I need to be smarter, next time.”