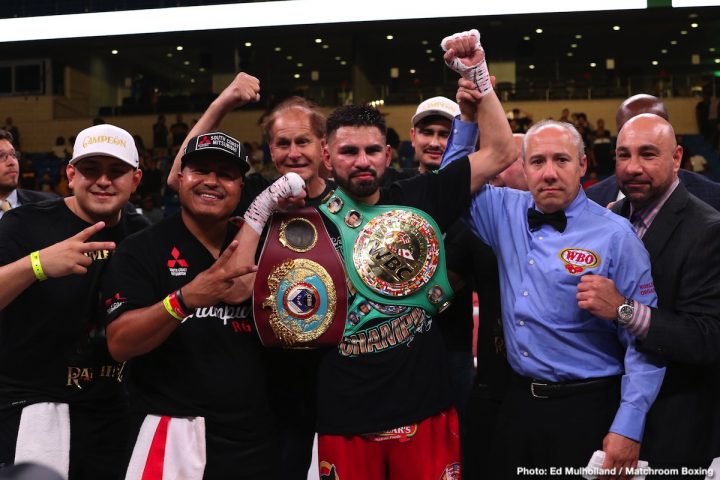 By Barry Holbrook: WBA/WBC light welterweight champion Jose Ramirez (25-0, 17 KOs) has signed a multi-year extension with his promoters at Top Rank, according to ESPN. The move by Ramirez could potentially make it difficult for him to get fights against other top fighters not signed with his promoters.

Ramirez, 27, recently defeated WBO 14 pound champion Maurice Hooker by a sixth round knockout on July 27 in a unification fight in Arlington, Texas. Ramirez, who usually fights on ESPN, came over to DAZN to face Hooker. In a grueling fight, Ramirez backed him up against the ropes, and took him out with a storm of shots in the sixth.

If possible, Ramirez wants to fight the winner of the World Boxing Super Series 140 pound tournament between Regis Prograis an Josh Taylor. There probably won’t be enough time for Ramirez to fight the winner of that match this year, because two aren’t expected to fight until October 26. Prograis recently pulled out of the WBSS tournament over money issues, but they’re bringing him back.

“I feel blessed to be unified world champion,” said Jose Ramirez to Fino Boxing. “Of course,” Jose said when asked if he’d be interested in fighting Regis Prograis. “I want to go after all the titles, depending on when that fight [Prograis vs. Josh Taylor] takes place. If it’s too late at the end of the year, then I might get ready for a mandatory. I believe the WBO has a mandatory, and the WBC has a mandatory. They may make me do a mandatory.

Maybe at the same time that happens. I owe it to ESPN for allowing me to miss a fight with them in coming to DAZN. I owe it to them to bring one more fight with them. But if the fight happens where it’s not too late at the end of the year, then I might as well wait for them, for the winner,” said Ramirez.

There’s talk of Ramirez fighting the winner of September 14th fight between Jose Pedraza and Jose Zepeda. Ramirez recently beat Zepeda (30-2, 25 KOs) by a 12 round majority decision on February 10 in Fresno, California, but the win was controversial. It was a close enough fight where boxing fans would like to see Ramirez and Zepeda face each other again. But Zepeda needs to beat Pedraza next month, and that won’t be easy to do. Zepeda will have the size and power advantage over Pedraza, who will be coming up in weight from lightweight.

Ramirez needs to improve to beat the elite at 140

The punishment that Ramirez took against Hooker and Zepeda would be a problem for him against Prograis or Taylor, and he’s going to need to work on his defense. Those guys punch hard, and they know how to get out of the way of shots. Zepeda picked Ramirez off with shots all night long in their fight last February, and he looked like the winner at the end of the fight.