By Matt Lieberman: Boxing great Erik ‘El Terrible’ Morales doesn’t like the idea of Ryan Garcia fighting Manny Pacquiao, as he sees this s a fight that will end in 2 rounds with the young ‘Kingry’ getting destroyed.

The former four-division world champion Morales notes that Ryan hasn’t even won a world title yet, and he needs to do more to deserve a fight of this nature.

Ryan(21-0, 18 KOs) only recently won the interim WBC lightweight title against Luke Campbell in a less than inspiring performance on December 19th the way that Ryan celebrated afterward, it was obvious to all that he had been worried during the bout.

Ryan Garcia will be done in 2 rounds by Pacquiao

“Pacquiao with Ryan is a very lopsided fight. Even though (Manny) is old, he can put Ryan to bed in two rounds,” said Erik Morales to ESPN KNOCKOUT.

The way that Ryan was dropped by Campbell in the second round, it’s believable what Morales says about Pacquiao stopping him in 2.

Depending on how quickly Pacquiao starts off, he might finish Ryan in one round if he goes right at him. Pacquiao would have to avoid Ryan’s trademark left hook, though, as that’s a dangerous weapon that he’s capable of hurting anyone.

Other than money, the fight does nothing for Pacquiao, 42, or Ryan, who will be returning to the lightweight division afterward. It’s never easy for a fighter to bulk up in size than return to the weight class they left. 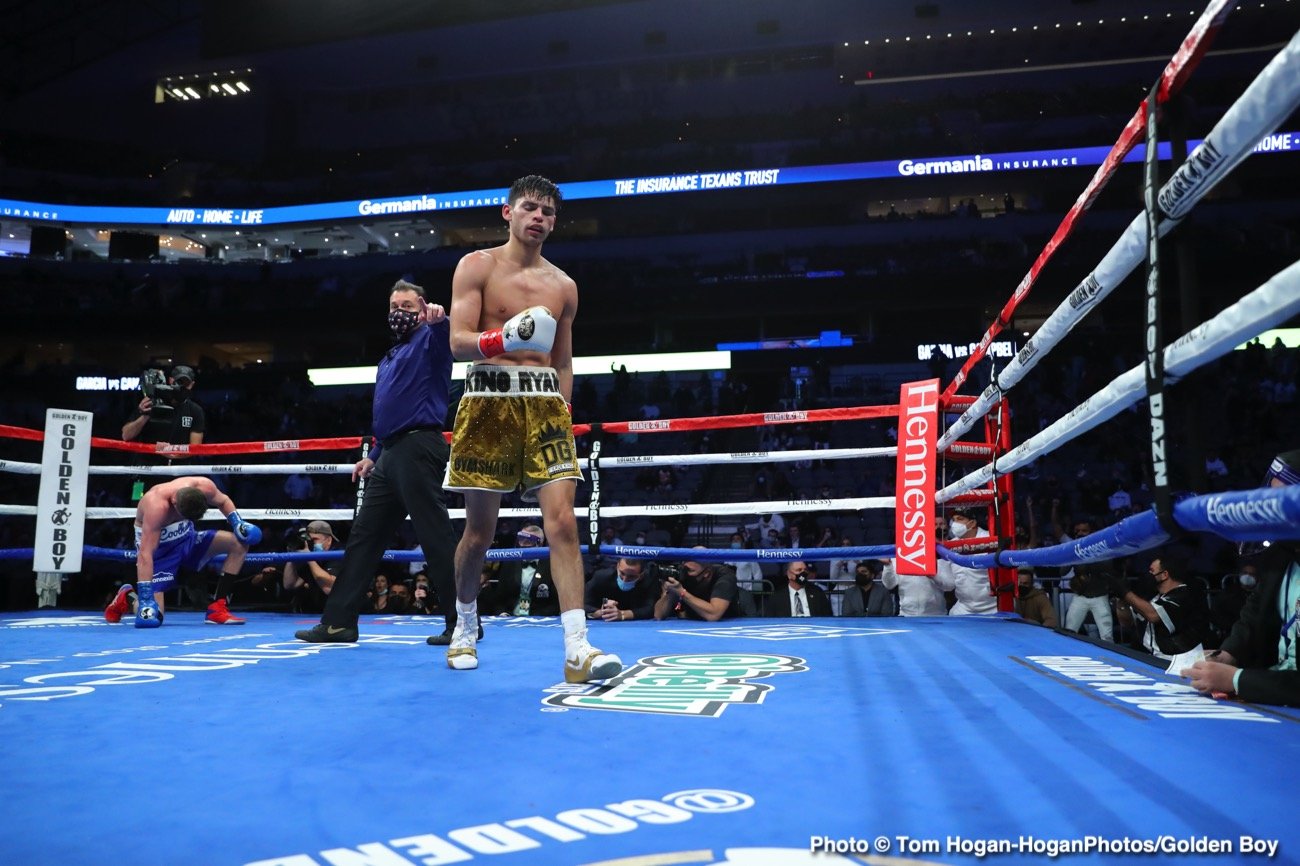 What was interesting is Ryan has continued to talk up a match against Pacquiao despite Gomez saying it’s not happening.

What we don’t know is whether Ryan is purposefully mentioning Pacquiao’s name to gain fame the cheap way by name-dropping or if he truly believes a fight against him is possible.

Erik Morales: Ryan needs to fight the best to earn the fight

“I think (Ryan) takes advantage of him being a popular fighter. That is the reality, he is already a champion, but he has to face the best to ratify it, because he is hardly interim,” Morales said of Ryan Garcia.

If Morales gets his way, Ryan Garcia would take on Gervonta ‘Tank’ Davis, Teofimo Lopez, Vasily Lomachenko, or Devin Haney to earn the fight with Pacquiao.

Ryan would be the underdog against all of those fighters, and there’s a good chance he’ll lose to them. That might be one of the reasons why he’s in such a big hurry to fight Manny.

It’s not only about catching Pacquiao before he retires. You can argue it’s more about getting the money before Ryan is exposed and he’s no longer getting the hype that he is now.

“I would love for Pacquiao to fight Mikey Garcia , who is a not so great fighter (physically),” said Morales. “There are Spence and Crawford, but Spence is very big, he’s tough, and Crawford is a good boxer.

“I don’t think he [Pacquiao] grabs them, they are natural welterweights, although the Filipino always surprises,” Erik added.

If it’s just about money, by all means, Pacquiao should fight Mikey Garcia, and get an easy payday. Mikey isn’t much better than Ryan Garcia when it comes to fighting at 147.

He took a beating in his loss to Errol Spence Jr in 2019, and he was thoroughly pedestrian looking in his wins over Jessie Vargas and Sergey Lipinets.

A better fight for Pacquiao would be for him to try and win back his WBA title against Yordenis Ugas.

He’s the one the World Boxing Association elevated to WBA ‘Super’ champion after they stripped Pacquiao of the belt for him being inactive for a year and a half after winning the title.

If it is just about money, which Morales seems to be hinting at in wanting him to fight Mikey Garcia, Pacquiao can probably do better fighting Ryan Garcia or Conor McGregor.

Mikey has stunted his career prematurely his career by not fighting and getting heavy.

« Leon Spinks passes away at 67