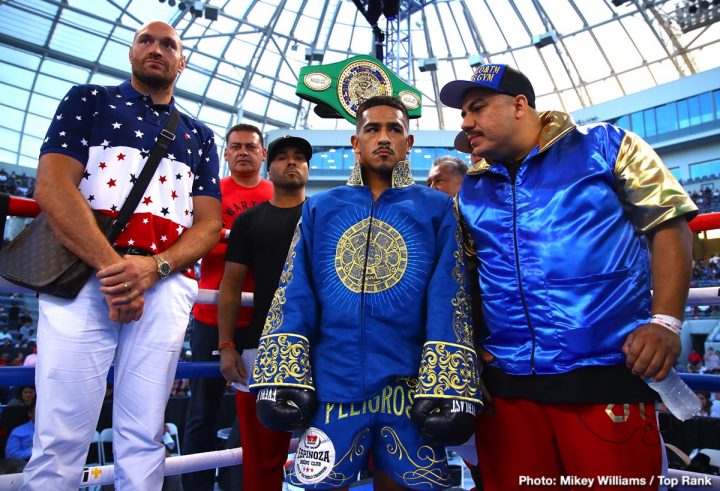 By Tim Royner: Tyson Fury believes the Anthony Joshua rematch is in Andy Ruiz’s hands for December 7. It’s up to Ruiz Jr. whether he wins or not, because it’ll come down his training for the fight. According to Fury, he says Ruiz (33-1, 22 KOs) has been living it up, acting like the hero due to his upset seventh round knockout win over Joshua (22-1, 21 KOs) on June 1 in New York.

Lineal heavyweight champion Fury thinks Ruiz Jr. could turn into another Buster Douglas, and wind up as a one-hit wonder before being dethroned. For boxing fans who might not know who Douglas is, he dethroned Mike Tyson (37-0) in stopping him in the 10th round on February 11, 1990 in Tokyo, Japan. This was a huge upset, as Douglas had never shown the type of talent before or since that would suggest that he would beat a guy like Tyson.

Douglas’ career was never the same after the win. Looking soft and bloated, Douglas lost his next fight to Evander Holyfield by a third round knockout on October 25, 1990.

“If Andy [Ruiz] comes in shape and he’s trained, then I think he does the same again,” said Fury to Behind The Gloves. “I know Ruiz has been running around with a Rolls Royce, and doing a lot of TV shows, and eating a lot of tacos. He’s not been in the gym for 2 1/2 months. Apparently, he’s going to start training on Monday. Whether it happens or not is a different thing. Could Andy Ruiz be the second coming of Buster Douglas? Could it really happen?

The one thing about Joshua is he trains like a Trojan, and he’s dedicated and wants to get his titles back. Whereas one man has a few quid in his pocket, and is running around California, Mexico and wherever like a lunatic. ‘I’m a hero. Blah-blah-blah.’ He won one fight. Big deal. If he doesn’t dedicate himself to the gym, he’ll get smashed in the rematch. And this man thinks he can win the rematch,’ said Fury.

Ruiz Jr. weighed 268 pounds for his fight against Joshua on June 1, and you can argue that he wasn’t in the greatest shape. It didn’t matter that Ruiz wasn’t body beautiful. He knocked Joshua down twice in round three, and he was hurt and tired from that point on. Ruiz didn’t do much in rounds four, five and six. He took his foot off the accelerator, because he looked like he was a little tired. Joshua wasn’t doing anything either to bring a sense of urgency to Ruiz. That changed in the seventh round when Joshua nailed Ruiz with a hard shot that woke him. Ruiz then charged after Joshua, and knocked him down. When Joshua got back to his feet, it was obvious that he stunned. Ruiz then finished Joshua off.

“How AJ wins. Other than the fact that Ruiz is running around not training, letting money go to his brain, and overlooking everything,” said Fury. “If he goes in there for the fight and does what he does, that’s how he wins. Which was a lucky punch? Of the 1000 punches that landed, which one was a lucky punch? I’m not sure which one he was on about. One of the knockdowns maybe or the last blow. I don’t know. If he was here, I’d ask him which one was lucky.

I didn’t see any lucky punches landed. He got hit, he got hurt, and that was it, and he got dropped and lost. It wasn’t like the shot Hasim Rahman hit Lennox Lewis with, and he was out cold with one punch. One mistake. It was sort of a sustained beating from round one to round seven,” said Fury about Joshua’s loss to Ruiz. “If he did’t beat him, then who would he be today? If he didn’t land the punch and beat Joshua, then he’d be another bum, a nobody,” said Fury.

Ruiz hurt Joshua with a left hook in round three, and he never recovered from that blow. It’s debatable whether one can call it a “lucky punch” or what. A better description for the shot would be for Joshua to call it an ‘unlucky punch’ that Ruiz landed, because he was hurt from that shot.

Fury: Ruiz was a nobody before he fought Joshua

“What about Andy Ruiz? Was he a top tier when he fought him?” said Fury in firing back at Joshua for his recent comments about Otto Wallin. “Nobody knew who Andy Ruiz was. He was a replacement opponent. People only become somebody by being given an opportunity. This time last year, Andy Ruiz was a nobody.

Today, he’s the heavyweight champion of the world. If he wasn’t given an opportunity on two week’s notice, then nobody would still know his name. So he [Joshua] contradicted himself [in criticizing Wallin]. AJ, you need to think before you speak. He [Joshua] had his a– handed to him by Andy Ruiz. So now he thinks he needs to talk a bit more,” said Fury.

Fury is being harsh in calling Ruiz a “nobody” before his fight with Joshua. Ruiz showed amazing talent before his fight with Joshua, but his career had failed to take off with Top Rank. He should have been unbeaten still going into the Joshua fight, because his only defeat at the hands of Joseph Parker was a controversial one in 2016. Ruiz’s promoters failed to put him the big fights that he needed for him to take his career to the next level.

“Fury is going to fight Otto Wallin. No one talks about that,” said Joshua to skysports.com. “I fought Wallin as an amateur. These guys are the cream of the crop. They shouldn’t be fighting these type of people. I can’t fight Wallin. I don’t think I could ever fight lower tier heavyweights,” said Joshua.

It’s impossible to know how good Wallin is because he’s not fought anyone talented enough to get a good gauge on his ability.

“We had three opponent,” said Fury. “Alexander Povetkin was offered to fight Tyson Fury. He said no. Then he took the fight with Hughie [Fury] instead. Kubrat Pulev was offered the fight, and he said, ‘No.’ Charles Martin,no. Trevor Bryan, no. [Jarrell] ‘Big Baby’ Miller, popped for a drug test. Dillian Whyte, popped for a drug test. [Deontay] Wilder is fighting [Luis] Ortiz. Ruiz is fighting AJ. Who is there? I could have maybe fought Chris Arreola. He’s lost 10 fights in a row or something.

So, Wallin was the highest ranked opponent available who was willing to step up. There was nobody else. The heavyweight division is very short on dance partners. It’s supposed to be, but we’ve got to get through these fights [Wallin and Luis Ortiz],” said Fury when asked if he’ll be fighting Wilder in a rematch on February 22. “He [Wilder] signed the contact after the [Tom] Schwarz fight. So the signatures are on paper. There’s no way out of it. He has to fight me, and I have to fight him,” said Fury.