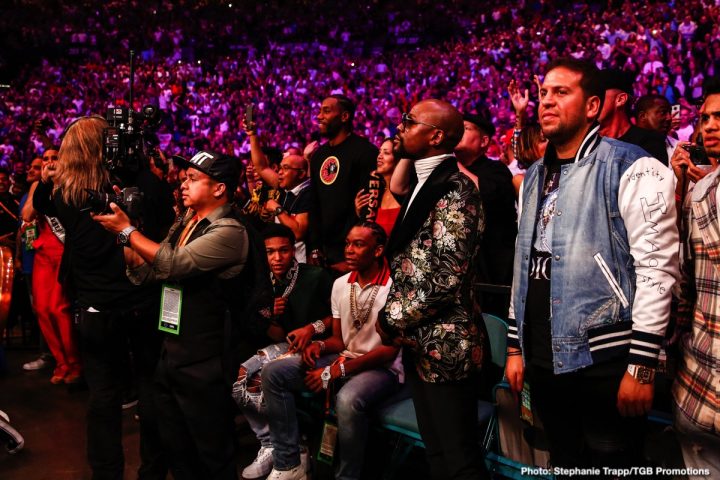 By Jeff Aranow: Floyd Mayweather Jr. says the video that surfaced on Sunday of him talking about a rematch with Manny Pacquiao in Saudi Arabia is an old video, and that he has no plans on fighting the Filipino star ever again. In looking at the video, it was obvious that it was extremely old. Mayweather looked 10 years younger. Unless Mayweather found the Fountain of Youth, it obvious that video was ancient.

Mayweather says that even if he did fight the 40-year-old Pacquiao (62-7-2, 39 KOs), he could make excuses afterwards like he did in their fight in 2015. Pacquiao said he had an injured shoulder for that fight. Mayweather notes that Pacquiao was able to lift his arm after the fight.

Mayweather no truth to him fighting Pacquiao again

‘There’s no truth to me and Pacquiao fighting in a rematch,” said Mayweather to Fighthype. “Even if we did fight, all they going to do is have an excuse. You know what I’m saying? Like they did the first time. He can raise his hand after the fight is over. All of a sudden his shoulder is messed up. Excuse after excuse. A real champion takes his win like a man, and takes his loss like a man. As for me and Pacquiao, there will never be a rematch,” said Mayweather.

It’s probably disappointing to the 40-year-old Pacquiao and his fans that Mayweather has shot down the video as false for him coming back to fight Manny in Saudi Arabia. Pacquiao has made it abundantly clear that he would like to fight Mayweather again to avenge his loss from 2015.

Without Mayweather coming back, Pacquiao is faced with some difficult choices for his next fight. For Pacquiao to make the big money, he’s got to battle the welterweight champions Errol Spence and Terence Crawford. Those are both fights that Pacquiao would be an underdog, and would likely lose. Pacquiao can always fight Keith ‘One Time’ Thurman again, but the boxing public won’t be as interested in the rematch, because the outcome was conclusive for their recent fight.

The video is false says Mayweather

“The video that y’all been seeing is false because I’ve been went to Saudi Arabia. I went there a long time ago,” said Mayweather.

Mayweather has fought only twice in the last four years, and both matches were against MMA guys that had no boxing skills. Mayweather defeated Conor McGregor and Tenshin Nasukawa in one-sided fights. In Floyd’s last true fight against a real boxer, he defeated Andre Berto in September 2015. Berto came into the fight with a 3-3 record in his last six contests, and Mayweather was criticized heavily for taking the fight.

The fans wanted him to fight IBF welterweight champion Kell Brook at the time, but he wanted an opponent that the U.S boxing fans would recognize. Nevertheless, the American fans were disappointed in Mayweather’s choice of Berto.