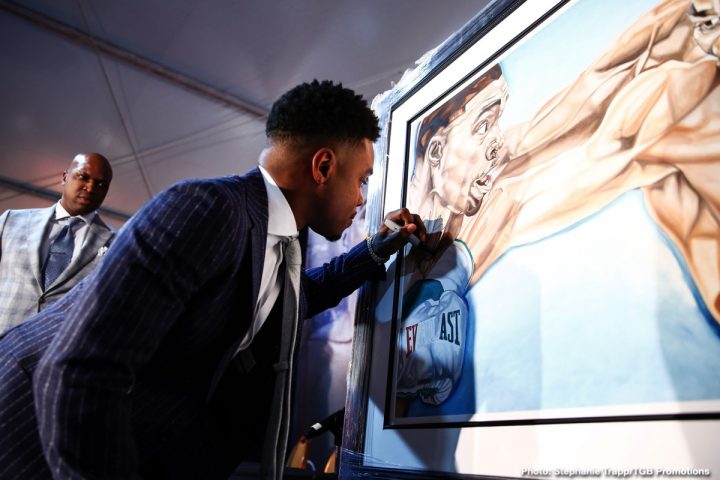 By Dan Ambrose: Errol Spence Jr. is looking carved up like a status with 5 1/2 weeks to go before his 147 pound unification fight against WBC welterweight champion ‘Showtime’ Shawn Porter on September 28.

Spence (25-0, 21 KOs) took issue with Porter (30-2-1, 17 KOs) and his dad/trainer Kenny Porter stating that he looked heavy during their recent kick off news conference, and he’s been training hard to make them eat their words.

“They called me fat 3 weeks ago,” said Spence about Shawn and Kenny Porter. “I’m in shape and ready for him too. We’re both always in exciting fights and that’s what we’re going to give the fans.”

Spence-Porter will be headlining on September 28 on FOX Sports PBC Pay-Per-View  at the Staples Center in Los Angeles, California. There’s less than six weeks to go before the fight, and IBF champion Spence looks ready for battle. Porter had problems making weight for his last fight against Yordenis Ugas last March. Shawn eventually made weight for the fight, but it wasn’t easy. Moreover, Porter’s performance that night was lackluster, as he looked weak and gun-shy in winning a controversial 12 round split decision.

Porter, 31, seems like he’s counting on Spence being weight drained for the fight, and it doesn’t look like it’s going to happen. Spence looks ripped already, and he still have the major portion of his training camp to finish. He just started training, and he’s looking ready to fight.

Kenny Porter: Spence still needs to get in shape

When you saw our opponent today, you saw that his face looked different, and his weight wasn’t where you’d normally have seen it. He had to do some work to get there. We didn’t have to do no work to get there. He just gradually came down to where he’s at. So, he’s in the best shape of his life physically, mentally, emotionally, nutritionally, spiritually in every aspect of what we’re doing,” said Kenny.

Spence is concerned about Porter making it a dirty fight by head-butting him, and throwing elbows. He isn’t saying what he’ll d is Porter fights like that, he states that he’s got a game plan to dean with it. Porter didn’t fight dirty in his losses to Keith Thurman and Kell Brook, but he couldn’t get close to those guys often enough due to their movement. Brook tied Porter up the entire night to prevent him from getting his shots off. Spence won’t want to fight like that though, because it’s too ugly.

“It’s going to be an amazing moment when I get this knockout at STAPLES Center,” said Spence. “My whole thing is that I’m looking for the stoppage. I want to make a statement that I’m clearing out the division. I want Manny Pacquiao.”


« Kovalev hoping to motivate Canelo to face him