Kovalev hoping to motivate Canelo to face him 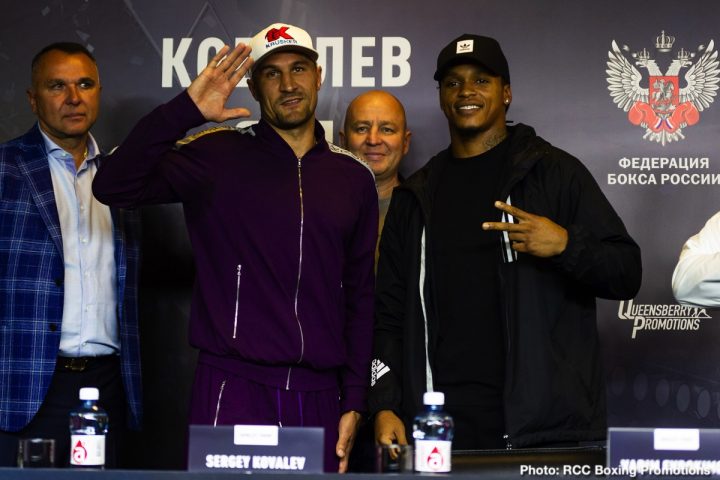 By Barry Holbrook: Sergey Kovalev needs an impressive victory over Anthony Yarde this weekend for him to keep hope alive for a big money fight against Saul Canelo Alvarez in November. Kovalev (33-3-1, 28 KOs) must not only successfully defend his WBO light heavyweight title, he’s got to look good.

This is the 36-year-old Kovalev to put himself into the driver’s seat to the Canelo fight, because the Mexican star wants to capture a title at 175. Canelo views the Russian Kovalev as the most appealing of world champions at light heavyweight.

Kovalev’s ring wear a potential problem for him

There’s a lot of wear and tear with Kovalev from his long career, as well as his outside of the ring activity. All those years may catch up to Kovalev on Saturday night when he gets inside the ring with the Mike Tyson-esque Yarde, who is a devastating puncher. Yarde lives the life of a boxer, as he trains constantly, and stays in shape year round.

🔥 Anthony Yarde has some big body shots and some huge hooks; he is a dangerous, dangerous man…

These are his biggest ever hits 👊 pic.twitter.com/lJYAcPFtit

Kovalev can’t struggle against the unbeaten Yarde (18-0, 17 KOs) or win a controversial decision. He needs to make easy work of Yarde, who has no experience at all. Yarde is inexperienced, and more of a product of soft match-making.

Kovalev-Yarde will be taking place this Saturday at the Traktor Sport Palace, in Chelyabinsk, Russia.

“It is too early to talk about that. Let’s talk after Saturday night,” said Kovalev to Sky Sports about a fight against Canelo. “Yes, we had an offer. The offer was a substantial one. My primary task is to defend the title. If the fight is still interesting for Canelo, then okay. This fight gives us an opportunity to fight with Canelo later on.”

Yarde has the punching power, engine and the youth to pull off an upset against the aging Kovalev, who has shown vulnerability in losses to Andre War and Eleider Alvarez. Yarde, 28, lacks the Olympic pedigree that Ward and Eleider possessed, but he’s equipped with punching power and stamina to steamroll Kovalev.

What Yarde lacks in terms of experience and boxing skills, he more than makes up with his power, youth and conditioning. Yarde can do a lot of the same things that Eleider and Ward did in beating Kovalev, because there’s no mystery about it. Kovalev has horrible stamina, and he doesn’t take body shots well. As Ward and Eleider showed, Kovalev is a six-round fighter. He quickly fades after six rounds when he’s pressed hard.

Canelo was stripped of his IBF middleweight title recently when he spent too much time attempting to make a fight with Kovalev. When Canelo’s promoters swung their attention back over to his IBF mandatory Sergiy Derevyanchenko, they were unable to make a deal fast enough to avert being stripped of the belt by the sanctioning body. Canelo wanted to fight on the Mexican Independence Day holiday on September 14, but he had to move off the day when he couldn’t get an opponent scheduled. Canelo has already started training for the November fight against Kovalev, and he looks powerful and motivated.

“He calls himself a lion but, to me, he is a cub,” said Kovalev about Yarde. “He is still young. I will get rid of his baby fur so he runs away back home. He thinks that he will knock me out, but on Saturday everybody will see what will happen. The plans are to have all the belts and become the [undisputed] champion,” said Kovalev.

It sounds like a fantastic dream of Kovalev unifying the light heavyweight division. For Kovalev to accomplish that task, he’ll need to beat Yarde, Canelo, Artur Beterbiev, Dmitry Bivol and Oleksandr Gvozdyk. IBF champion Beterbiev is fighting WBC belt holder Gvozdyk on October 18. The winner of that fight will hold the IBF and WBC belts. Kovalev can go after the winner of the Beterbiev-Gvozdyk fight, and become a three-belt champion at 175.