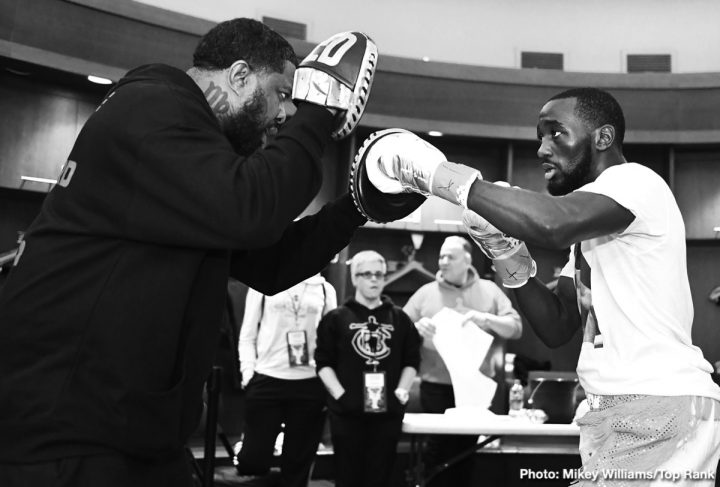 By Chris Williams: Terence Crawford says Errol Spence Jr. needs a fight against him and not vice versa.  Crawford argues that Spence needs him, but it doesn’t sound that way. WBO welterweight champion Crawford (35-0, 26 KOs) states that he’s heading for the boxing Hall of Fame whether he fights IBF champion Spence (25-0, 21 KOs) or not.

Crawford is sounding very needy right now, because he still has never fought an elite level guy during his career.

Spence is happy with who he’s fighting in battling Mikey Garcia, and being on the verge of a Shawn Porter fight. If Spence wins that match, he could be facing Manny Pacquiao later this year. In contrast, Crawford is fighting guys like Jose Benavidez, Amir Khan and Jeff Horn. Those are fringe level fighters at best at 147.

Crawford that he’s done enough with his career in unifying the 140 pound weight class, and capturing world titles in three divisions. He says he wants the fight with Spence, but the Top Rank-PBC situation is getting in the way of a lot of the fights happening. Terence, 31, doesn’t sound very happy with him not getting meaningful fights against Premier Boxing Champions fighters like Spence. Instead of fighting Spence next, Crawford is likely to fight either 38-year-old Luis Collazo or Egidijus Kavaliauskas.

“What I always tell people when they mention me and Errol Spence, of course, I want the fight. I tell everybody,” said Terence Crawford to Joe Rogan. “I always say with or without him, I’m going to the Hall of Fame. If you look at all the things I’ve accomplished in the sport of boxing, people that are in the Hall of Fame didn’t even accomplish that. I just think that I don’t need him [Spence]. He really needs me. You’ve got ask him,” said Crawford when asked why isn’t the fight with Spence getting made.

In simple terms, the Spence-Crawford fight isn’t happening, because Crawford re-signed with Top Rank Boxing instead of moving on to ink with PBC or a promoter that works with them. Crawford was well aware of the politics that are involved with the different companies not often working with each other. Terence knew that before he re-upped with Top Rank, and now he’s complaining that he’s not getting the Spence fight.

If boxing was controlled by one company like the NFL, then there wouldn’t be an issue. Crawford and all the PBC fighters would have to fight each other, but that’s not how it is in boxing. What further complicates things is Crawford fighting on ESPN, while Spence’s bouts are shown on Fox Sports. It’s not just the management/promotional companies that are getting in the way of a Crawford-Spence fight.

There’s also the networks that make the fight tricky to put together fights involving guys from different promotional companies. Since neither Crawford and Spence haven’t established themselves as a big pay-per-view attractions in boxing, it means that the two networks, FOX and ESPN, would need to share in the revenue for a fight that might not bring in a massive amount of buys. Spence’s recent fight against Mikey Garcia last March did around 400,000 pay-per-view buys on Fox. 10 years ago those numbers would have been terrible for a PPV fight. With the money that Spence and Crawford will likely be asking for a fight between them, there may not be enough revenue generated from PPV sales to turn a profit for the promoters and networks.

“It’s all about business. But on my side, I’m ready. I think it has something to do with Top Rank-PBC,” said Crawford in trying to understand why he’s not getting the fights he wants against PBC fighters. “And, I wouldn’t say financial, because the money would be there, if the fight were ever to be made. I just think it’ll eventually happen, but me being with Top Rank is standing in the way of a lot of things happening,” said Crawford about a unification fight with Spence.

As long as Crawford is willing to wait one to three years, he’ll eventually get the fight against Spence, but may not be the same fighter he is now. Unlike Spence, Crawford is a fighter that needs his quick reflexes and fast feet to win. Once he starts losing that from his game, he could be another Roy Jones Jr. in finding himself unequipped to fight off the younger lions. Crawford will still be able to switch hit, and move around the ring, but that’s not going to win fights. You’ve got to do more than change stances to bet someone like Spence. You’ve to be able to stand in the pocket and fight.

Don’t forget to check out the @joerogan podcast. Was a ton of fun chatting it up with him. pic.twitter.com/lcN1s4Y8kG

What could keep the Spence vs. Crawford fight from ever getting made is deciding the purse split. Crawford wants a 50-50 split, and Spence has already told him that’s not happening. As long as Crawford is demanding 50% of the revenue for  fight with Spence, it’s unlikely to happen. Spence would likely agree to a 70-30 or maybe a 60-40, but that’s about as close as he’ll go. If Spence gives Crawford a 55-45 split, he could overpaying the Top Rank fighter.

“He’s going to return before the end of the year at Madison Square Garden [in New York]. We’re working on the opponent now,” said Top Rank promoter Bob Arum to Fighthub about Terence Crawford’s next fight in December. “There are names. I’m not going to go into it, but we are considering a good opponent, a top opponent. It’s a fight that will get tremendous viewership, because will be watching the Heisman [trophy award],” said Arum.

Arum might as well mention the names that he’s negotiating with for Crawford’s December 14th fight in New York, because it’s well known that it’s Egidijus Kavaliauskas and Luis Collazo that are in the running for the fight. Arum is counting on Crawford’s December fight bringing in big ratings because it’s taking place during the time of the Heisman ceremony for college football. Collazo used to be a good fighter 10 years ago, but he’s old timer now, and not elite level. Kavaliauskas is coming off of a questionable 10 round decision over Ray Robinson. The fact that he struggled so badly against a fringe contender like Robinson, it shows that he doesn’t belong at #1 with the World Boxing Organization. If the WBO doesn’t order that fight, Crawford should fight someone else, but he probably won’t come.

He’s right,” said Arum when asked about ESPN commentator Tim Bradley saying that Errol Spence is ducking Crawford. “You don’t make a guy disappear like Crawford by not putting him up as a welterweight champion, because your fighters are afraid to fight him. I mean, who are you kidding? There’s no question in my mind that Crawford is the best welterweight in the world. Absolutely,” said Arum when asked if the Premier Boxing Champion welterweights are ducking Crawford.

” Why would they? You know that’s bull s–t. That’s a load of crap,” said Arum when told that Spence has other fights that he needs to take care of against PBC fighters. “They’re afraid to fight the guy. If they can’t go in with Crawford, and put one of their fighters in with Crawford, and beat Crawford, that would be really be a blow to us, right? They could really punish us by beating Crawford, but they can’t beat him. So they won’t fight him. If they could beat him, of course they would fight him,” said Arum.

There’s no upside in PBC fighters facing Crawford. Not only is he on the other side of the pond fighting on a different network, he’s also a switch-hitting counter puncher and a mover. On top of that, Crawford doesn’t have a big face base. Fighters don’t want to face counter punches, especially ones that change stances and move around the ring like Crawford. There’s no reason for any of the PBC fighters to want to fight Crawford, because he’s got so many things going against him.

BoMac should talk Crawford into taking some chances with his career by having him move up to 154 or 160 to go after the fighters in those weight classes. If Crawford were to move up to junior middleweight, he could take on guys like Jermell Charlo, Jarrett Hurd and Julian ‘J-Rock’ Williams. At middleweight, Crawford could look to get fights against Saul Canelo Alvarez and Gennady Golovkin. Welterweights have moved up to 160 before, and Crawford would be admired for it.

Is Crawford in the wrong league?

With all the different promotional companies and networks, it’s almost like there are different leagues. You can compare it to football in a way. In that sport, the best known ones are the NFL, CFL and Arena Football League. The teams from those leagues don’t compete against each other ever. In professional basketball, there are a huge number of different leagues that don’t face each other. As such, it shouldn’t be surprising that kind of thing goes on in boxing. You can argue that Crawford chose to box in a different league than the PBC fighters by staying with Top Rank, and now he’s complaining. Spence isn’t complaining, because he’s happy with the guys that are available for him to fight with PBC.