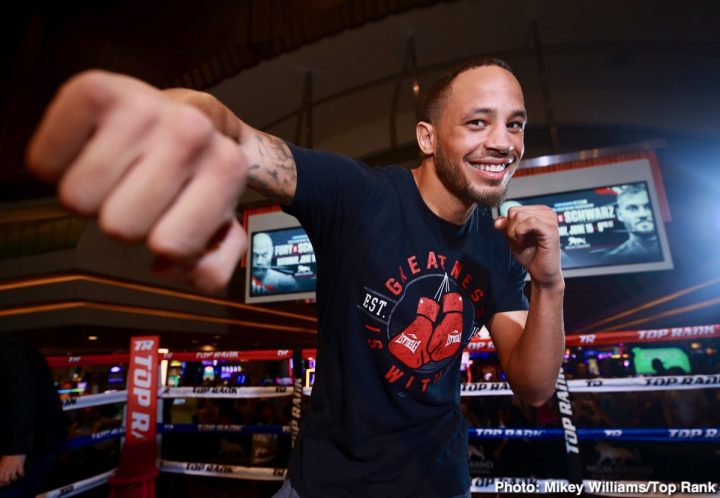 Horn, 31, will be at ringside for the Brant vs. Horn fight this Friday in Osaka, Japan.

This isn’t an ideal fight for Brant to make him a popular fighter, but he’s got to start somewhere. Although Horn is well known with the hardcore boxing fans in the U.S, he’s not well liked by a lot of them. Horn’s questionable win over Manny Pacquiao in 2017, and his ninth round knockout loss to Terence Crawford in 2018 hurt what little popularity he had. Top Rank should be looking in the direction of Gennady Golovkin, Saul Canelo Alvarez, Jermall Charlo, Daniel Jacobs and Demetrius Andrade for Brant to be fighting instead of Horn. Those are obviously talented fighters that would give Brant a lot of problems with their punching power, and boxing ability.

“If the economics are right it’s definitely a fight that could happen and fight we’re all interested in,” Brant’s co-promoter Greg Cohen said to ESPN.com. “There’s nothing definite but it’s a very good possibility.”

There was talk earlier this year of Horn facing Brant, but the match never came off. Horn recently moved up to middleweight, and defeated 44-year-old Anthony Mundine by a first round knockout last January in a catchweight fight at 156 pounds in Brisbane, Australia. The win over former WBA super middleweight champion Mundine (48-9, 28 KOs) resulted in Horn being pushed up to the #3 spot in the World Boxing Association’s rankings at middleweight.

Brant will have big size advantage over Horn

This is a bad match-up for Horn. He’s not a true middleweight, and he has problems against fighters that throw a lot of shots. Brant threw over 1,000 punches in his recent win over Murata last October in dethroning him of his WBA title. It would be better for Horn to fight in the 154 pound weight class. He would have a better chance to compete down there than he will at 160.

For the Brant-Horn fight to take place, Brant (25-1, 17 KOs) will need to defeat Murata (14-2, 11 KOs) on Friday, and Horn (19-1-1, 13 KOs) must get by junior middleweight fringe contender Michael Zerafa (26-3, 15 KOs) in their fight on August 31 in Bendigo, Australia. Murata, 33, will need to make some drastic changes in his fighting style for him to have a shot at beating Brant. The Japanese fighter is too slow and methodical to match the high work rate of Brant. Unless Murata has a special game plan that can negate Brant’s high volume punching, he’s going to get beaten again.

Horn’s lack of experience at middleweight will be a problem

The high ranking is a little questionable given the lack of experience for Horn at 160. The WBA has Horn ranked above Matt Korobov, and that doesn’t make a lot of sense. Korobov is a very good fighter, who arguably deserved a victory last December in his fight against interim WBC middleweight champion Jermall Charlo. Horn is rated below #1 WBA Gennady Golovkin and #2 WBA Daniel Jacobs. It’s a good thing the WBA didn’t rank Horn above those two, because it would have resulted in a huge backlash from fans. Just two fights ago, Horn was stopped in the ninth round by Terence Crawford in June 2018, and he was over-matched.

Brant, 28, is coming off of an 11th round knockout victory in his first defense of his WBA title against Khasan Baysangurov (17-1, 7 KOs) last February.

A better opponent for Brant than Horn would be 2012 Olympian #7 WBA Equiva Falcao (23-0, 15 KOs), but he’s not faced anyone of note since he turned pro. Horn has done more with his career since turning pro in 2013 after competing in the 2012 Olympics. In a big upset, Horn defeated World Boxing Organization 147 pound champion Manny Pacquiao by a 12 round unanimous decision in July 2017 in Brisbane, Australia. The win for Horn was a controversial one with a lot of boxing fans seeing it as a hometown decision for the Australian fighter.

Brant, 6’0 1/2″, will have close to a three inch height advantage over the 5’9″ Horn when/if the two of them face each other. That’s not why Brant will be favored over Horn. It’s Brant’s high work rate. He throws a lot of shots that makes it difficult for his opponents to defend against all the incoming punches.


« Tevin Farmer defends against Guillaume Frenois on July 27 on DAZN

Jazza Dickens: May is a level below me! »