Golovkin to fight Munguia next if no Canelo trilogy 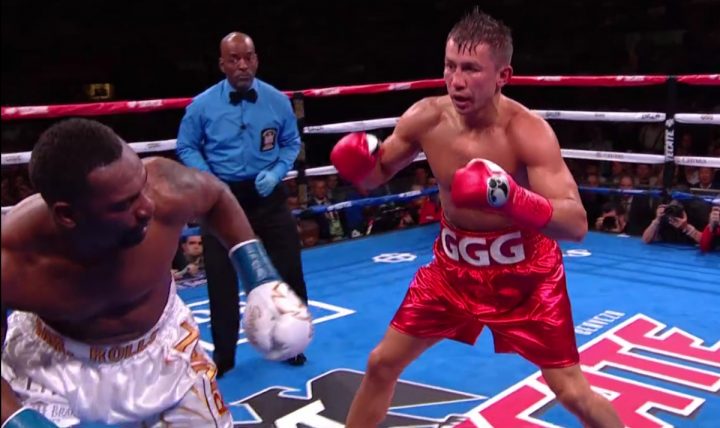 By Barry Holbrook: Gennady Golovkin is heading towards a fight against unbeaten Jaime Munguia potentially on October 19 on DAZN, if his trilogy match with Saul Canelo Alvarez doesn’t get made for September 14, according to @MikeCoppinger. DAZN has ONLY given the green light to Canelo Alvarez for him to face Golovkin and WBO light heavyweight champion Sergey Kovalev.

So there it is. DAZN likes Golovkin vs. Munguia. It’s a fight that they feel is worth putting on their network, according to Coppinger’s sources. It’s easy to understand where DAZN is coming from in liking Golovkin vs. Munguia (33-0, 26 KOs). It’s a fight that would attract a lot of Mexican boxing fans, and that would help raise the subscription rates for DAZN. If Golovkin fights someone else like WBO middleweight champion Demetrius Andrade or WBA Super World 168 pound champion Callum Smith, there might not be as many new subscribers to DAZN despite the fact that those are both excellent fighters.

After the way that Munguia was battered by his last opponent WBO mandatory Dennis Hogan last April Golovkin-Munguia is going to be a tremendous mismatch in favor of Golovkin. Munguia got worked over by Hogan in winning a controversial decision over the Australian based fighter on April 13 in Mexico.

Munguia approved for GGG but not Canelo?

“DAZN has approved two opponents for Canelo Alvarez’s next fight: GGG and Sergey Kovalev,” said Coppinger. “Unless DAZN changes its mind, that would block any plan to make Canelo-Munguia on Sept. 14, paving way, possibly, for Canelo-Kovalev & GGG-Munguia (maybe Oct. 19)”

In looking at DAZN liking Munguia for GGG, it seems obvious that they want to make sure that that Golovkin wins his next fight. Having GGG fight Munguia, it increases the chances of the Kazakh going into the trilogy contest with Canelo off the back of a victory instead of a loss. If Golovkin had to fight someone like Demetrius Andrade, the outcome wouldn’t be 100 percent known going in.

DAZN is putting Canelo in a tough spot with them reportedly only approving Golovkin and Kovalev for his next fight. It weakens Canelo’s position to negotiate with either of those fighters.

It’s tempting for Canelo to fight GGG next

“Of course, Canelo Alvarez could just fight GGG in the trilogy fight on Sept. 14, but the middleweight champion is determined to fight someone else next,” said Coppinger.

In looking at this, Golovkin gets the much easier job of fighting the 22-year-old Munguia compared to Canelo, who would have to move up in weight two divisions to take on the 36-year-old Kovalev (33-3-1, 28 KOs) for his World Boxing Organization 175 pound title. Kovalev obviously isn’t in his prime any longer, and he might not even be the top five of the light heavyweight division at this stage of his career. But still, Kovalev is a far tougher opponent than Munguia. Golovkin fighting Munguia is like having a softball lobbed to GGG so that he can easily hit it out of the park.

Kovalev’s size will be tough for Canelo to handle

Canelo will have to deal with Kovalev’s size, ranginess and his punching power. Golovkin would have a stationary banger in Munguia, who is easy to hit, and not nearly as skilled as him. Kovalev probably isn’t as good as the elite light heavyweight Artur Beterbiev, Dmitry Bivol, Marcus Browne and Oleksander Gvozdyk, but he’s still a top five guy.

Demetrius Andrade not on Canelo’s approved list by DAZN

Recently, WBO middleweight champion Demetrius Andrade was mentioned as a possible option for Canelo to fight on September 14, but he’s not one of the two opponents that has been approved by DAZN for Canelo to fight. It’s only GGG and Kovalev that DAZN has approved for Alvarez to fight. Whether Canelo’s promoters at Golden Boy Promotions can change that or not is the important question. If not, it puts Canelo in a position where he and Golden Boy are at the mercy of Golovkin and Kovalev to negotiate a fight with one of them. It strengthens their bargaining position once they know that they’e the only two that have been approved by DAZN for Canelo fight.

Kovalev in a better position to negotiate with Canelo now

Since Canelo is said to be not interested in fighting Golovkin next, it makes it clear to Kovalev and his promoters at Main Events and Top Rank that they’re the only option for Alvarez’s next fight on September 14.

For Andrade, he might have put himself out of the running for the Canelo and Golovkin fights, as far as DAZN is concerned, with his recent lackluster 12 round unanimous decision over Maciej Sulecki last month on June 29 on DAZN. The fight was incredibly boring in the eyes of a lot of boxing fans because of the movement, and the defensive focus by Andrade. While Andrade and his promoter Eddie Hearn of Matchroom Boxing USA thought it was a swell performance, the fans thought otherwise. Many of them spoke out on social media afterwards, criticizing how Andrade fought.

What’s interesting is Andrade is one of DAZN’s fighters signed with them. If they’re not putting Andrade on the approved list for him to fight Canelo, then it makes you wonder what his future is with them. Andrade is unbeaten and holds the WBO middleweight title. He should be on DAZN’s approved list for Canelo unless the streaming company isn’t enamored of him after his recent fight against Sulecki.

Is DAZN telling Canelo who must fight next?

If it’s true what the sources are saying about only Golovkin and Kovalev being the only 2 fighters approved for Canelo to fight on September 14, then it sure looks like DAZN is telling the Golden Boy star who he must fight next. Golovkin gets a soft touch in Munguia, while Canelo has to choose between Kovalev and GGG. It’s really just Kovalev that Canelo has a choice to fight next, since he doesn’t want to face Golovkin on September 14. If Kovalev asks for too much money, then Canelo will no choice but to fight Golovkin next.