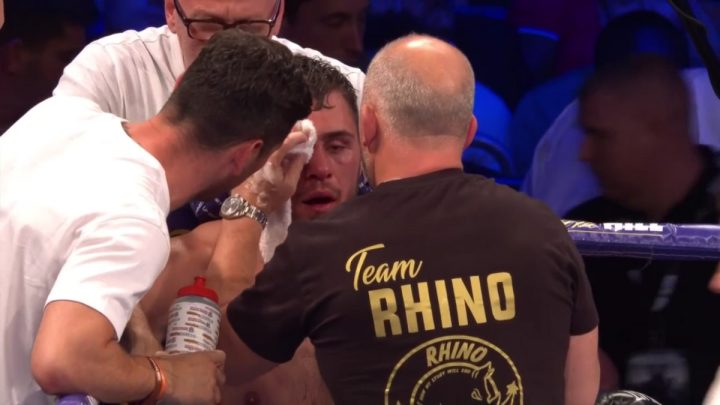 By Rod Hochscheid: Heavyweight Dave Allen is hinting at retirement following his one-sided 10th round stoppage last Saturday night at the hands of 2008 bronze medalist David Price at the O2 Arena in London, England. Allen suffered a broken right eye socket, and damage to his tongue during the fight. Allen, 27, was taken to the hospital after the fight.

The loss for Allen removes any possibility of a fight between him and Alexander Povetkin. Allen had asked his promoter Eddie Hearn to setup that fight before he fought Price last Saturday. Hearn said it was a done deal for Allen to face Povekin next. Allen says he’d still be up for fighting the 39-year-old Povetkin, but obviously that’s a pipe dream for that match to take place now.

Allen (17-5-2, 14 KOs) soaked up heavy punishment at the hands of the 6’8″ Price (25-6, 20 KOs) for 10 round before his trainer Darren Barker told the referee to stop the fight before the start of round 11. Allen, 6’3″, lacked the arm length, size and even the power to hurt Price. He hit Price with plenty of shots on the button, but he couldn’t stun him with anything.

“Now probably done,” Allen said on social media last Saturday night after his loss to the 6’8″ Price. “After a few weeks I will sit down and decide, is it really worth it? Don’t want anyone to worry about me, just a hard man gone old and soft the last 18 months. [I’m] very happy and proud of David price. I will be okay but the last 12 months or so my health has been deteriorating and I’m glad I hung on took the chance and made money and now probably done,” said Allen.

Allen wasn’t going all in looking for the knockout like past Price opponents. The guys that have done well in stopping the big 6’8″ Price have forced him to fight at a fast pace, and looked to take his head off with every shot. Allen wasn’t doing any of that. He was fighting at a slow pace, which favored Price, and he wasn’t attacking him in the same way that fighters that have beaten him did. The blueprint was there for Allen to follow from Price’s knockout losses to Alexander Povetkin, Tony Thompson, Christian Hammer, Erkan Taper and Sergey Kuzmin.

Everything’s okay now gonna go have a few quite days let me face and pride heal and I be back thanks for all nice messages x pic.twitter.com/ZEGyDmbddA

Allen was coming off of an impressive third round knockout win over former WBA heavyweight champion Lucas ‘Big Daddy’ Browne in his previous fight last April, and there were hopes of the lucrative payday fight against Povetkin if he could have chinned Pricey. Allen had a four-fight winning streak going for him since losing to 2016 Olympic gold medalist Tony Yoka by a 10th round stoppage in 2018. The punishment Allen took in his loss to Price arguably surpassed all of his past defeats at the hands of Yoka, Dillian Whyte, Luis Ortiz and Lenroy Thomas.

This was the best Price boxing fans have seen for almost seven years. Price looked like he went back to his old training ways. Price was getting a lot of leverage on his shots, and not showing signs of weakening as the rounds progressed like he’d experienced in the past. What helped Price in that department was the slow, careful pace that Allen fought at. He didn’t push Price hard the way that his recent opponent Kash Ali had done, even though he’s arguably a better fighter than Kash. It was the wrong game plan for Allen to use against a fighter with a history of stamina and chin problems.

Dave wants you to know he’s ok. He’s just waiting on a scan and a few stitches. He also wants to congratulate @DavidPrice_1 on a fantastic win and hopes everyone gets home safely. pic.twitter.com/65vQun8XiW

It would be great news if Allen doesn’t require surgery on his damaged broken eye socket. But even if he does need surgery, he can probably come back from that. Kell Brook suffered two broken eye sockets in his losses to Gennady Golovkin and Errol Spence Jr., and he’s still fighting more or less. In Allen’s case, the money would be important. If he’s not going to be involved in fights that will give him life changing money, then perhaps it’s not worth it for him to continue on.

Allen needs to bulk up

Allen had it in him to beat a fighter like Price, but his weight looked too low. He’d lost a lot of weight recently, and he didn’t show the same punching power that he’d had in the past when he was weighing in the 260s. Although Allen looked physically in shape at 241 pounds for the Price fight, he didn’t have the same punching power that he’d exhibited in his knockouts wins over Tom Dallas, David Howe, Nick Webb, Samir Nebo and Ariel Esteban Bracamonte. Alle is one of those George Foreman type fighters that possesses more punching power when he comes into his fights looking heavy in the upper 250s, 260s and 270s. It’s a good thing for Price that Allen wasn’t punching like he’d done in the past, because he probably would have knocked him out.

“You know what, I’m heartbroken about last night, but it’s easier to laugh than cry don’t be a twat have some compassion,” said Allen. “I’m not a great boxer I’ve had lots chances you think is unwarranted but I’m a good man and I do what I do to provide a better life for me and my family. Half tempted to ask Eddie if Povetkin still needs a move around next month.”

It’s unknown how long it’ll take for Allen to come back from his eye injury. But if he does choose to resume his career, it would be a good idea for him to take it slow, and put on some weight to bring his punching power back.

« Broner: ‘Thurman got cooked by Pacquiao. I did better’