Broner: ‘Thurman got cooked by Pacquiao. I did better’ 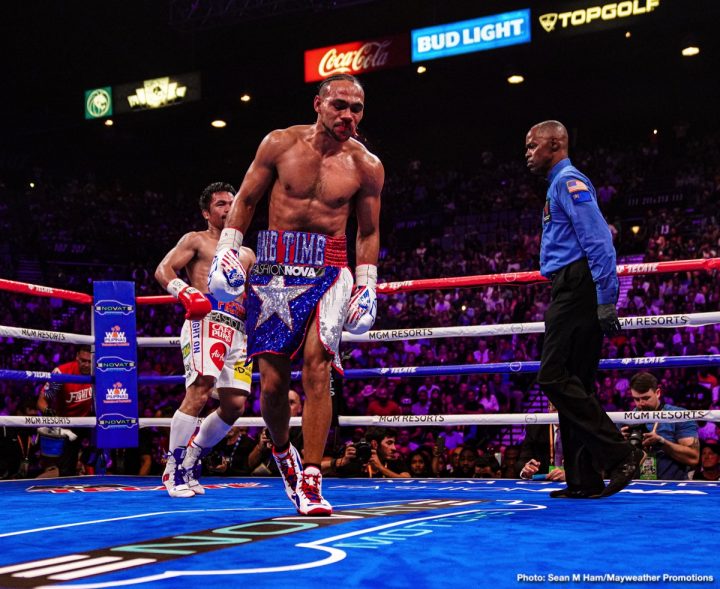 By Dan Ambrose: Adrien Broner gloated last Saturday night in trashing Keith ‘One Time’ Thurman’s performance against Manny Pacquiao at the MGM Grand in Las Vegas, Nevada. Broner says Thurman (29-1, 21 KOs) got “cooked” by Pacquiao, and that he looked like he was getting ready to quit. Broner’s seemed happy last night, because his stock went way up with Thurman’s loss.  Broner also added that a fight against Thurman would be “easy money.”

Broner also revealed that he and Thurman were gambling on Thursday and Friday of this week. He says Thurman was gambling with him at 3:00 a.m. on the morning of the weigh-in last Friday.

Broner says Thurman was going to “quit” against Pacquiao

“Thurman got cooked. He told you; he’s not Adrien Broner. He already said it. He got cooked,” said Broner said in gloating last night following Thurman’s loss to Pacquiao. “He was going to quit.”

It didn’t look like Thurman was going to quit, as Broner says, but he clearly lost the fight. Pacquiao’s superior conditioning, and speed is what proved to be too much for ‘One Time’ to handle. When Pacquiao continued to fight hard into the championship rounds, Thurman struggled, and was hurt by a body shot in round 10. Earlier in the fight, Pacquiao had dropped Thurman in round one, and put him in an immediate hole. Thurman did a good job of rallying in the second half of the fight, but he couldn’t stay up with Manny in rounds 10, 11 and 12.

Broner: I did better than Thurman against Pacquiao

“I don’t even get the credit I deserve. Now everybody is giving me credit,” said Broner. “I did way better than Keith, he got cooked… He almost wanted to quit, too. I seen some quit in him too.”

The reason why Broner hasn’t been given credit for his performance against Pacquiao is because he didn’t fight well. Broner wasn’t letting his hands ago, and he was spending too much time defending against Manny’s shots instead of attacking. Thurman was on the attack much of the time against Pacquiao. Just based on Thurman’s willingness to fight hard, you have to rate him well above Broner.

Broner says it was the same Pacquiao that he fought

“It was the same guy, but he wasn’t in there with a guy like me,” said Broner when asked if Pacquiao had improved for the Thurman fight compared to when he fought him last January. “

“He told you during the whole camp, that he’s not Adrien Broner,” said Broner in reminding the media how Thurman had repeatedly said during interviews before the Pacquiao fight that he’s NOT Adrien Broner in letting them know that he wouldn’t lose to Manny. “He said, ‘I’m not AB.’ We’ve seen you’re not,” said Broner in gloating about Thurman’s loss.

It really bothers Broner that Thurman was telling members of the media that he’s “not Broner” when they were asking him if he would potentially lose or struggle against Pacquiao. Instead of addressing the reporter’s questions on their own merit, Thurman dragged Broner’s name into it, making it clear that he’s a better fighter than him. Based on Thurman’s previous performance against Josesito Lopez, it’s hard to argue that he’s better than Broner. Both guys are on the same level based on how they fought against Pacquiao. Thurman might have done a little bit better against Manny, but not by much. 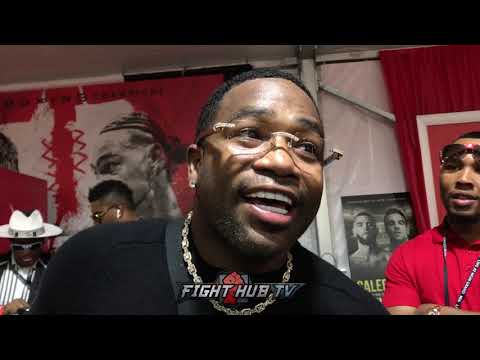 Here are the scores for Broner and Thurman in their losses to Pacquiao:

Broner says Thurman was gambling with him on Thursday and Friday

“He was doing a lot of s–t wrong,” said Broner about Thurman in his fight against Pacquiao. “The main thing is he wasn’t focused. He [Thurman] was gambling with me for tonight’s straight, Thursday and Friday. I said, ‘Don’t you got to make weight? What are you doing?’ He got up and got his a– off the table. He shook my hand, and said, ‘You’re right, I needed that. Thanks, Bro,’ and walked away. Three in the morning,” said Broner when asked what time Thurman was gambling with him on Friday morning.

If this is true about Thurman gambling with Broner on Thursday and Friday, it suggests that he didn’t believe that he could win this fight. Thurman gambling at three in the morning on the day of the weigh-in looks especially bad, because he should have been resting up for the fight. With the huge money that Thurman is getting for the Pacquiao fight, it’s possible that he wasn’t too worried about him losing. The big cash that Thurman will be getting for the fight makes him a winner anyway. You have to wonder whether Thurman has self control issues, because he sounds like he’s undisciplined.

Broner talks about how he neutralizes southpaws

“That’s why when I fight southpaws, they can’t do s–t with the way I fight,” said Broner in talking about why Pacquiao struggled at times to beat him.  “I watched the [Pacquiao-Broner] fight, and it wasn’t nothing what he [Pacquiao] was doing. It was just what I wasn’t doing,” said Broner.

Broner didn’t neutralize Pacquiao, and he’s a southpaw. It looked like Manny was hitting Broner with everything he threw pretty much the entire fight. In fairness, Broner made it made it easy for Pacquiao to tee off on him by resting with his back against the ropes, and trying fruitlessly to block punches with the Mayweather shoulder roll. That defensive style only works against fighters that throw a moderate amount of punches.

Against guys that let their hands go with high volume attacks like Pacquiao, it’s not going to work to employ the shoulder roll. Broner wasn’t letting his hands go against Pacquiao, and it appeared that he didn’t have the gas tank to throw more than  small handful of shots in each round. Some boxing fan think Broner was afraid to throw punches against Pacquiao for fear of being countered, and that might be true. Broner looked terrified inside the ring with Manny.

“It’s time for me to start doing what I want to do, and stop doing what others want me to do,” said Broner. He [Pacquiao] could have stopped him. I take my hat off to Thurman, but don’t disrespect me. That’s easy. That’s easy money,” said Broner about him fighting Thurman.

Broner says he’ll be fighting in October against southpaw Ivan Redkach (23-4-1, 18 KOs).  That fight is expected to be a mismatch, but at this point, Adrien needs a win under his belt. It’s been two years since Broner last won a fight in 2017 against Adrian Granados. The important thing is for Broner to break his winless streak, and start getting some victories under his belt to show the boxing world that hes NOT a shot fighter like many fans believe him to be.

“Probably in October,” said Broner when asked when he’ll be fighting next. “He’s going to sleep.”