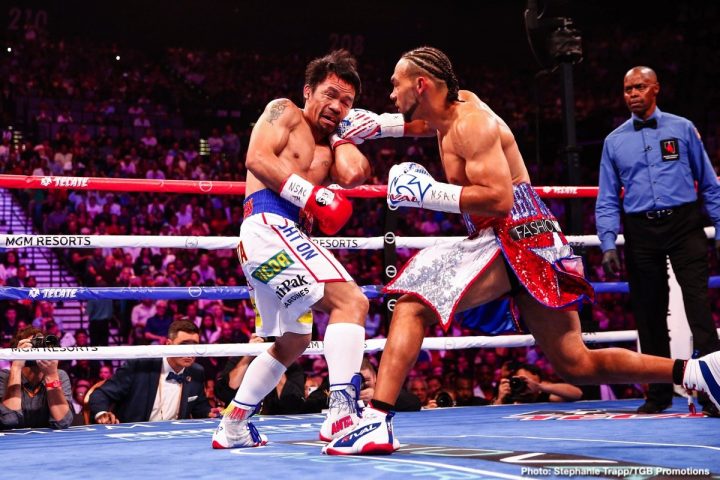 By Barry Holbrook: Manny Pacquiao’s contest against Keith Thurman was a lot closer than the final scores handed down by the judges last Saturday night on Premier Boxing Champions on Fox Sports Pay-Per-View at the MGM Grand in Las Vegas Nevada. For the record, Pacquiao, 40, won a 12 round split decision to unseat Thurman (29-1, 21 KOs) as the WBA Super World welterweight champion. The overall punch stats saw Thurman as the winner of the fight.

Pacquiao’s victory over the 30-year-old Thurman fundamentally changed the overall dynamics of the 147 pound division overnight.

Key to Pacquiao’s victory was a first round knockdown, and a body shot that he hurt ‘One Time’ Thurman with in the 10th round. Had those two things not occurred, Thurman might still be an unbeaten world champion today, calling himself the #1 welterweight on the planet.

The final punch stats showed a much different story from the scores handed down by the three judges. They scored it as follows: 115-112, 115-112 for Pacquiao, and 114-113 for Thurman.  Pacquiao failed to match Thurman’s more impressive numbers in the punch stats. Thurman connected on 210 of 571 shots, according to CompuBox. Pacquiao landed 195 of 686 shots.

In the end, the judges were more impressed with Pacquiao being the busier fighter, and not caring that Thurman landed more actual shots. Additionally, Thurman’s punches appeared to he harder than Pacquiao’s. One reason for that is simple. Thurman appeared to be 15 pounds heavier than Manny on the night after rehydrating Thurman looked to be in the mid-160s compared to Pacquiao, who looked no heavier than 150 pounds.

The punch stats favoring Thurman makes one wonder whether the judges got it right in giving Pacquiao the victory. Looking at the stats alone, you can’t dismiss the possibility of favoritism for Pacquiao. Thurman landed more shots, and with a higher percentage. That alone is reason enough to question the reasons of the fight. 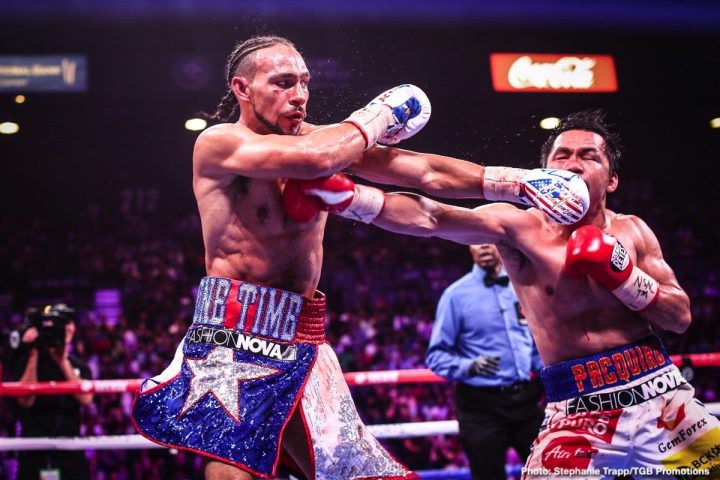 Were the judges unconsciously susceptible to the fame that Pacquiao had going into the match? After all, judges are only human, and it’s impossible to shutout the hype behind Pacquiao going into the fight. Unless the judges were living on a mountain top closed off from the rest of the world, they knew about Pacquiao’s great accomplishments in the past. As a result, it’s impossible to close off the possibility of them being influenced on an unconscious level.

For the boxing fans that feel that Pacquiao deserved the victory, they can point out that Thurman never once hurt him during the contest. That can also be explained away by Manny’s incredible chin. He’s only been stopped once in the last 10 years, and that was against boxing great Juan Manuel Marquez in 2012.

Thurman wants a rematch with Pacquiao

“I wish I had a little bit more output to go toe to toe,” said Thurman. “I felt like he was getting a little bit tired, but he did have experience in the ring. My conditioning and my output was just behind Manny Pacquiao’s. I would love the rematch.”

Thurman wants the rematch, and deserves it but he’s not likely going to get a second shot at Pacquiao. Like many other fighters that have fought Pacquiao and lost, Thurman is doomed to be ignored by the Filipino star for the remainder of his career. Thurman talked endlessly about wanting to fight Pacquiao and Floyd Mayweather Jr. throughout the years, and it’s regrettable that he would get a shot and lose under controversial circumstances.

The curtain has fallen on Thurman, and he’s not expected to get a second shot against Pacquiao no matter how much complaining he does. Several different factors coming together at the same time in a perfect storm led to keeping Thurman from getting the victory that some boxing fans felt he deserved last Saturday.