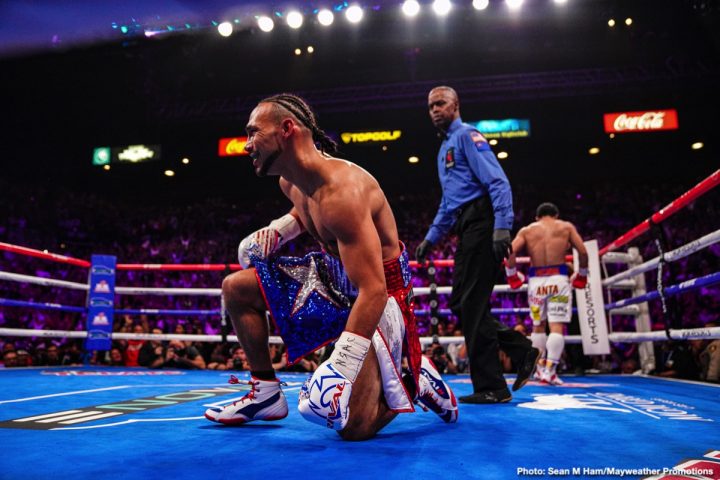 By Raj Parmar: In front of a sellout crowd of 14,356 at the MGM Grand, Manny Pacquiao was able to take down Keith Thurman and keep himself as a strong force in the crowded welterweight division. With the win, the 40 year-old Manny became the sole WBA welterweight champion and turned back the clock with his performance. Here are some notes from Las Vegas over this past weekend:

Pacquiao fans: Fans of the Filipino icon flooded the city and loudly supported their hero with extreme passion. Some of his fans were placing extremely high bets on him to win the fight, going up to as high as $10,000. There was a lot of confidence amongst his supporters that he was going to beat the younger and undefeated Thurman.

Thurman booed then cheered: Thurman was heavily booed in the MGM Grand Garden Arena during his aisle walk and introduction. This was not surprising as Manny’s fans packed the arena. However when Thurman showed class after the loss in his post fight interview and gave respect to Manny, the fans loudly cheered Thurman and showed appreciation for the tough fight he gave to Pacquiao.

Manny ranks Thurman’s power: During the post fight press conference, Manny stated that Thurman is extremely heavy handed and is the hardest hitter he has ever faced. The only comparison Manny had for the power Thurman hit him with was that of Antonio Margarito when he fought him in 2010.

Thurman states the rounds went by too fast: Thurman talked a lot in the post fight press conference about how quickly he felt the fight was going before he could get settled in. Especially after the round 1 knockdown, Thurman took a bit of time to gather himself and he said it was already round 7 when he felt like he was getting comfortable. He stated the rounds just flew by and he wasn’t able to get into a groove early enough.

Overall, it was an excellent fight and Manny showed he still has something left in the tank. Pacquiao is planning to attend the welterweight unification fight between Errol Spence and Shawn Porter in September, and the boxing world will be anticipating to see if a fight can be made between Manny and the winner of that fight.

Broner: ‘Thurman got cooked by Pacquiao. I did better’ »