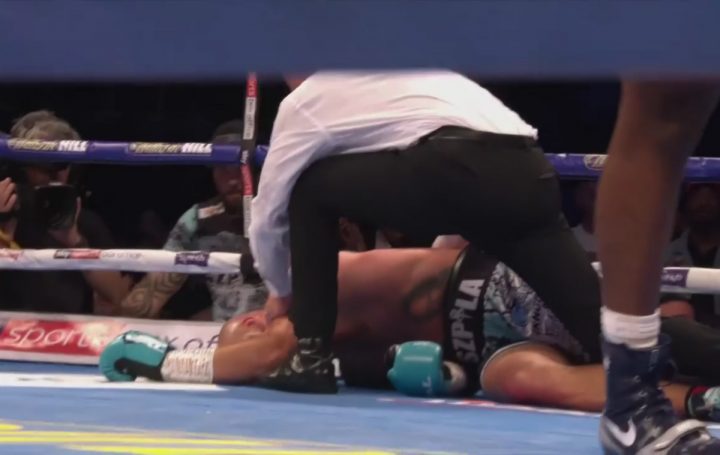 By Kenneth Friedman: Former heavyweight world title challenger Derek “Del Boy” Chisora (31-9, 21 KOs) absolutely crushed Artur Szpilka (22-4, 15 KOs) in stopping him in the second round in a scheduled 10 round fight on Saturday night at the O2 Arena in London, England. Chisora, 35, nailed Szpilka with a looping right hand to the head that badly stunned him.

Szpilka, 33, then covered up, was defenseless for a five-punch barrage that Chisora tagged him with. The finishing shot was a big right hand that sent Szpilka down on the canvas. Chisora could have hit Szpilka while he was on his way down, but he chose to hold back. The referee then stopped the fight right away.

Chisora too much for Szpilka

The first round was an uneventful one with Szpilka landing some nice left hands, and using movement to keep out of the range of Chisora’s big shots. In the second round, Szpilka was bakced up against the ropes, and nailed by a big right hand that badly hurt. Instead of grabbing Chisora to keep him from getting his shots off, Szpilka covered up, and was quickly taken out.

The knockout loss for Szpilka was his fourth in the last five years since 2014. Szpilka has now been stopped by Chisora, Deontay Wilder, Adam Kownacki and Bryant Jennings. It might be a good time for Szpilka to consider retirement. His knockouts are coming too frequently now, and it’s hard to imagine him being able to continue fighting for long with the way he’s getting hurt.

Next up for Chisora is former WBO heavyweight champion Joseph Parker. That’s the fight that Matchroom Boxing promoter Eddie Hearn plans on putting together next. Parker and Chisora both want the fight.

“I spoke to Joseph Parker who said to my face: make the fight,” former two division world champion David Haye said to Sky Sports News after the fight.

Hearn promotes both Chisora and Parker, so it’ll be an easy fight to make.

“Age is nothing but a number. I am 35 but feel 16. I still want big fights. I will fight until the break of dawn,” said Chisora.  “We want Joseph Parker, as long as he doesn’t run away like an Australian chicken!”

It’s going to be a lot more difficult for Chisora to beat Parker. He can take a punch, and he moves around well. The wheels could come off the Chisora express in this fight if he’s not able to trap Parker like he did with Szpilka.

Cruiserweight prospect Richard Riakporhe (10-0, 8 KOs) defeated the previously unbeaten Chris Billam-Smith (9-1, 8 KOs) by a 10 round split decision. The fight was a sloppy one with little in the way of defense. Riakporhe looked tired towards the end of the fight. The judges scored it 97-92, 95-94 for Riakpoehe, and 96-93 Billam-Smith.