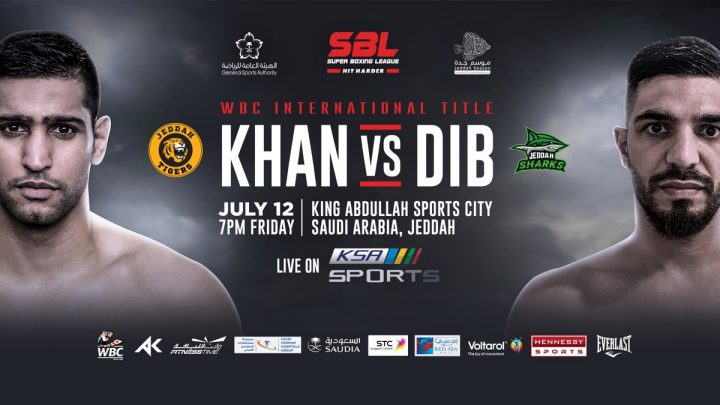 By Barry Holbrook: In an odd card, Amir ‘King’ Khan (36-5, 21 KOs) made easy work of replacement opponent Billy Dib (45-6, 26 KOs) in stopping him in the fourth round on Friday night to win the WBC International welterweight title at the King Abdullah Sports City in Jeddah Saudi Arabia. The fight took place in the welterweight division.

It was an easy night’s work for Khan, who was coming off of a sixth round stoppage loss to WBO welterweight champion Terence Crawford last April. Khan will be getting £7 million for tonight’s victory over Dib. That’s excellent money for such an easy fight.

Former IBF/WBA light welterweight champion Khan knocked the 33-year-old Dib down with a right to the head in the fourth. Dib’s corner then quickly threw in the towel before he could get back to his feet.

Dib’s punching power had zero effect on Khan. Once it became clear that Dib couldn’t hurt him, Khan went after him with blistering four-punching combinations. The only reason Dib lasted as long as he did is many of the shots that Khan threw missed. Dib taunted Khan at one point in the second round after he throws a flurry of shots that all missed. Khan was throwing so many speedy punches that his accuracy went out the window. Nevertheless, Dib had to his head down during these prolonged flurries. If he attempted to throw anything back in between those blinding shots, he would have gotten nailed.

Dib was throwing a lot of wild shots that may have worked for him when he fought at featherweight, but it wasn’t going to work against a technical guy like Khan. He needed to be sound technically to have a shot at beating Khan, and he failed to fight in the manner that he needed to. At 33, it’s too late in the game for Dib to have changed his style of fighting.

Khan’s hand speed looked incredibly fast from start to finish. In round one, Khan stalked Dib around the ring,

All in all, there was a lot to like from Khan’s performance tonight. He showed that he still has amazing hand speed, and he’s still a great finisher. Now if there was a way for Khan to move down to 126 or 130, he would be a major player overnight in those divisions.

His speed and size would make Khan a real threat to any of the top fighters at featherweight and super featherweight. But at 140 and 147, Khan’s punch resistance isn’t what it needs to be. Khan started his career at lightweight [135] in 2005, and he was nearly unbeatable in that weight class. The only loss he suffered was a first round knockout defeat at the hands of Briedis Prescott in 2008. Khan moved up to 140 in 2009, and fought well in capturing the IBF/WBA light welterweight titles.

In 2011, Khan suffered a close 12 round decision loss to Lamont Peterson. In Khan’s next fight, he lost to Danny Garcia by a fourth round knockout in 2012. Blaming the defeat on being too light, Khan moved up to 147, and his career hasn’t been the same. Khan should have moved back down to lightweight after his loss to Danny Garcia in 2012, because it was clear that he didn’t possess the chin to compete against the bigger punchers in the 140 pound weight class. If Khan could move back down to lightweight, he could be a factor in that division against guys like Luke Campbell, Vasiliy Lomachenko, Richard Commey, Teofimo Lopez and Devin Haney. Ideally, Khan would be best fighting at 130 at super featherweight or at 126. He showed tonight that he can stomp featherweights. That’s the weight class that Dib has competed in.

Manny Pacquiao could be next for Khan

With the win, Khan could be facing former division world champion Manny Pacquiao next. The Filipino star is fighting WBA Super World welterweight champion Keith ‘One Time’ Thurman next Saturday night on Fox Sports Pay-Per-View in Las Vegas, Nevada. Pacquiao needs an opponent for his next fight, but he’s shown little desire to face IBF welterweight champion Errol Spence Jr. or WBO champion Terence Crawford. Khan would be the ideal choice for the 40-year-old Pacquiao to face.

In the co-feature bout, 6’6″ Hughie Fury (23-2, 13 KOs) defeated former WBO heavyweight champion Samuel Peter (38-8, 31 KOs) in the seventh round after the Nigerian fighter suffered a right shoulder injury. Referee Ingo Barrabas stopped the contest at 2:07 of round seven.

Peter had turned to roughhouse tactics after he gassed out after two rounds. The 38-year-old Peter was hitting Hughie with low blows, rabbit shots, and nailing him on the break. In the third round, Peter missed badly with a wild hook that nailed the referee in the nose.

Afterwards, former world title challenger Hughie felt that Peter had intentionally quit in the seventh round. “He just wanted to get out of there, it wasn’t a genuine injury, he just bottled it.”

Fury not impressive in winning

It’s impossible to know whether Peter was genuinely injured or not. What we do know is Hughie didn’t look impressive in winning the fight. As out of shape and old as the 261 pound Peter was tonight, Hughie should have been able to stop him much earlier than he did. #15 IBF Hughie won the fight, but he didn’t distinguish himself with this performance tonight.

Hughie lost two years ago in a fight against former World Boxing Organization heavyweight champion Joseph Parker in 2017, but he doesn’t look improved. The way that Hughie fought tonight, he wouldn’t have had any chance of beating WBC champion Deontay Wilder.  IBF/WBA/WBO champion Andy Ruiz Jr. would have likely made easy work of Hughie as well.