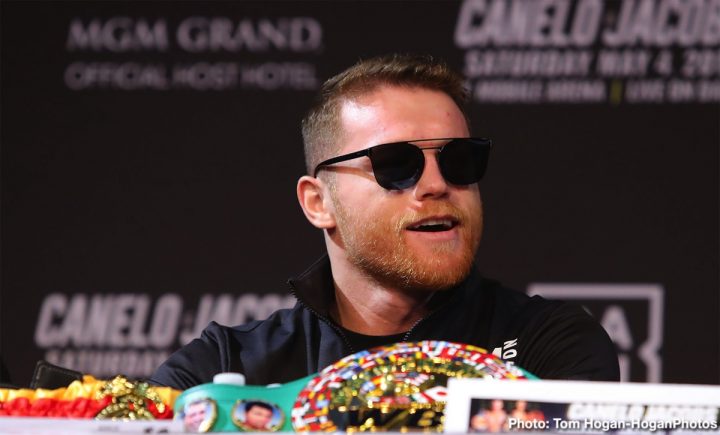 By Sean Jones: With Sergey Kovalev now signed to defend his WBO light heavyweight title against mandatory challenger Anthony Yarde on August 24, it puts Gennady Golovkin as the likely opponent for Saul Canelo Alvarez to defend his IBF/WBA middleweight titles against on September 14.

There’s no longer enough time for Golden Boy Promotions to seek out an alternative opponent that brings more to the table for a Canelo fight than Golovkin. WBO middleweight champion Demetrius Andrade just put in one of the worst performances this writer has seen in years in his win over Maciej Sulecki last month. The executives at DAZN had to have seen Andrade’s dreadful fight, and ruled him out as a future opponent for Canelo. After that that performance by Andrade, it wouldn’t be surprising if Canelo never fights him.

Canelo may not like the idea of giving GGG one final payday, but he would need to anyway. DAZN wants those two to face each other one more time, and it’s better now than later. They’re paying Canelo and Golovkin top dollar to face each other, so they to get it over with.

Golovkin and Kovalev were the only two fighters that DAZN approved for Alvarez to fight on September 14. Now that Kovalev, 36, is eliminated from contention with the news him signing to face Yarde, it leave GGG as the last man standing.

Canelo vs. Golovkin 3 = the fight the casuals want

DAZN will be giving the fight that the casual boxing fans want to see in putting on the Canelo-GGG trilogy fight on September 14. While some boxing fans might grumble about it, there’s nothing better than this right now for Canelo. Golovkin is the best available option for Alvarez (52-1-2, 35 KOs) to fight next on short notice.  Golden Boy has only mentioned Kovalev, Callum Smith and GGG as possible options for September.

Kovalev is out of the running, and Smith’s promoter Eddie Hearn at Matchroom Boxing says there hasn’t been any contact from Golden Boy to arrange a Canelo-Smith fight. Although WBA light heavyweight champion Dmitry Bivol volunteered to fight Canelo, Golden Boy isn’t going to make that fight. The 28-year-old Bivol isn’t on the decline like the 36-year-old Kovalev, and he’d be all wrong for Alvarez. Canelo would likely be an underdog against Bivol. It would be a different story.  Few boxing fans think Canelo would ever dare face Bivol.

Kovalev still a possibility for Canelo in December

Kovalev (33-3-1, 28 KOs) isn’t entirely out of the picture as a future opponent for Canelo Alvarez. If both fighters win their next contests, the two of them could face each other in December. However, there would still be many of the same obstacles that prevented the fight from taking place in September. Kovalev, 36, would still want a lot of money to fight Canelo, and he might not be worth it. Beating the unbeaten #1 WBO Yarde isn’t going to raise Kovalev’s popularity to any great level, and it’s not going to make boxing fans think he’s still in his prime.

Kovalev is on the downside of his career.  The casual boxing fans won’t be as excited with Canelo fighting Kovalev as some would think. Kovalev’s reputation has been hurt badly by his losses to Andre Ward and Eleider Alvarez. Kovalev’s record is 3-3 in his last 6 fights. What does Canelo stand to gain by beating Kovalev? Not much.

Those losses came within the last two years. At this point, you can argue that Kovalev is damaged goods. If Golden Boy wants to impress boxing fans by having Canelo move up to 175 to take on one of the world champions, they need to put him in with one of these fighters: Artur Beterbiev, Dmitry Bivol or Oleksandr Gvozdyk.

Pacquiao says he might KO Thurman before 6th round »