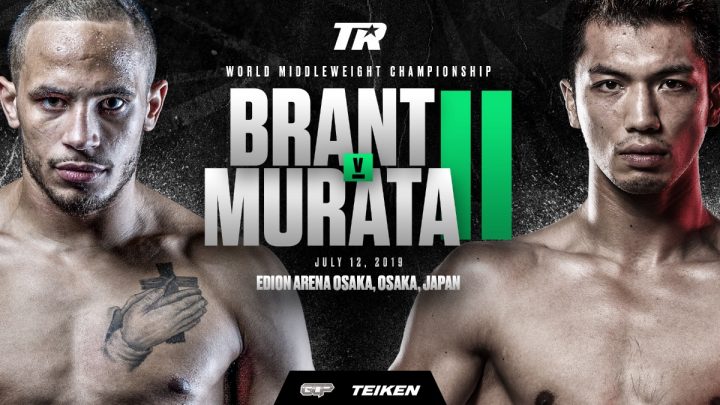 By Kenneth Friedman: Former WBA middleweight champion Ryota Murata (15-2, 12 KOs) made easy work of WBA ‘regular’ 160 pound champion Rob Brant (25-2, 17 KOs) in stopping him in the second round with a barrage of punches on Friday night at the EDION Arena in Osaka, Japan.

Murata, 33, knocked Brant down with a right to the head. Following the knockdown, Murata unloaded with a nonstop series of hard shots to the head against a nearly defenseless Brant for over a minute.

“Murata looks amazing. He’s ready for Canelo,” said the Japanese fighter’s co-promoter Bob Arum of Top Rank after the fight. It would be a good idea for Arum not to get his hopes too high on Canelo taking interest in facing Murata. There are a massive amount of obstacles that would stand in the way of making a Canelo vs. Brant fight.

Referee could have stopped it a lot sooner

The referee could have stopped a lot sooner than he did, because Brant was taking massive punishment, and only occasionally throwing a punch in self defense. The referee Luis Pabon finally stepped in called a halt to the fight after Murata hit Brant with a shot that caused him to stumble a little.

The official time of the stoppage was at 2:33 of round two. It’s unclear whether Murata would knocked Brant out if not for the referee stopping it. Murata had punched himself out, and Brant looked like he might have been able to make it out of the round.

Although listed as 6’0 1/2″, Brant looked shorter, smaller and weaker than the 6’0″ Murata. The lack of size and punching power for Brant hurt his chances of winning this fight. He decided to stand in front of Murata and trade with him like he did in the first fight. Brant lacked the size and power to beat Murata with volume punching like he did last October. Murata did an excellent job of working on his punching power for the rematch. He looked considerably stronger than he did in the first fight, and his punch output was better as well.

With the win, Murata avenges his loss to Brant from last October. Brant defeated Murata in an upset 12 round unanimous decision in Las Vegas, Nevada. Brant thew over 1,200+ punches in the win, and won by the scores 118-110, 119-109 and 119-109. Many boxing fans believed that the 28-year-old Brant would win the rematch with the 2012 Olympic gold medalist Murata based on his high work rate, and his youth.

Murata in the picture for fights with GGG and Canelo

The victory for Murata now has him in the running for a big money fight against former middleweight champion Gennady Golovkin and Saul Canelo Alvarez. There was interest in the past on Golovkin’s side to make a fight with Murata. There recent losses sidetracked those plans. Now that Murata is back as the World Boxing Association ‘regular’ 160 pound champion, a GGG fight is an option.

A lot will depend on how Golovkin does in 2019. He plans on fighting in October, and he’s still interested in facing Canelo in a trilogy match. Canelo probably wouldn’t be interested in fighting Murata, because he’s not well known in the U.S with the casual boxing fans. Further, Murata isn’t a highly regarded world champion. He’s a belt holder. Canelo and Golovkin fight on DAZN, whereas Murata’s fights are shown on ESPN. Murata isn’t a big enough name to bring in a lot of subscriptions on DAZN. It would be surprising if DAZN approved Murata as an opponent for Canelo or Golovkin. They’re paying those two fighters a lot of money, and Murata isn’t popular enough to make it worthwhile for DAZN to let Canelo and GGG fight him.

Murata’s performance: The good and the bad

With both fighters having won one fight a piece in decisive victories, a trilogy match is an option for Murata and Brant. They’re both with Top Rank Boxing, and fight on ESPN. That makes it an easy fight to make. Top Rank would likely like to put them back in with each other. In a predictable move, Bob Arum will first attempt to put together a Murata vs. Golovkin fight. If that fails, then he’ll surely look to make the trilogy Murata-Brant fight.

The results of their first fight in which Brant won a wide 12 round unanimous decision, and Murata now stopping him in the second round, it makes a third fight appealing. The question is where would the third fight take place? Do they take it back to Japan or put it in the U.S? Murata fights a lot better in Japan in front of his own boxing fans. Brant will likely go wherever the money is at, because he doesn’t have a lot of options for big fights. Murata fights much better at home.

Brant connected on 42 of 143 punches for a 29% connect rate, according to CompuBox, whereas Murata landed 98 of 211 shots for a whopping 46 percent connect percentage. When a fighter lands almost 50% of their punches, that’s significant. This was a straight demolition job for Murata tonight. He brought his game-face, and came into the rematch with the perfect plan to avenge his loss to Brant.

In other action, WBC junior flyweight titleholder Ken Shiro ran his record to 16-0 (9 KO) with a fourth round stoppage of mandatory challenger Jonathan Taconing.