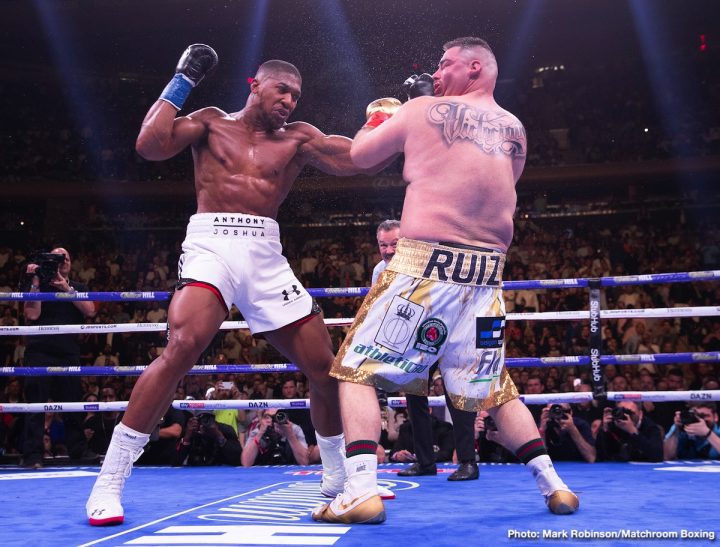 By Charles Brun: Andy Ruiz Jr. says he wants to trim down for his rematch against former heavyweight world champion Anthony Joshua later this year. IBF/WBA/WBO champion Ruiz Jr. (33-1, 22 KOs) believes that if he’s trimmer, and more toned, it’ll give him additional speed that he can use to shock the world a second time in beating Joshua (22-1, 21 KOs) again. The goal for Ruiz Jr. is to get down to 250lbs/255lbs for his rematch with Joshua.

Ruiz Jr. weighed a chubby looking 268 pounds when stopped Joshua last month in the seventh round on June 1 at Madison Square Garden in New York.

“I’d love to be at 250, 255, but just be fit and be solid,’’ said Ruiz Jr. to usatoday.com. “Now that I have the right team behind me and the right equipment and all that, I think it’s going to work out for my benefit and it’s going to work out in my favor. I want to be more toned. Just shock the world even more, you know? I’ll have more ability, more speed, more power if I turn the little flab I have into muscle,” said Ruiz.

Some fans would argue that Ruiz Jr. fights better at a heavier weight in the 260s than he does when he’s in the 240 and 250s. Just looking at Ruiz’s resume, he’s scored a lot of knockouts when he’s heavier than when he’s trim.  Losing weight could negatively impact Ruiz’s punching power, and leave him weaker for the rematch with Joshua. As the saying goes, ‘If it’s not broke, don’t fix it.’ Ruiz Jr. could be making a mistake in losing weight for vanity purposes rather than focusing on just winning and not looking body beautiful.

Joshua, 29, is built like a bodybuilder, and yet he still ran out of gas after three rounds against Ruiz Jr. This wasn’t the first time that the Primo Carnera-esque Joshua had run out of gas in one of his fights. The 6’6″ Joshua faded badly in his fights with Dillian Whyte and Wladimir Klitschko after getting caught in early fire fights. Joshua could have lost both of those fights. He was fortunate.

Joshua will be looking to take Ruiz Jr. the full 12 round distance in rematch

Ruiz Jr. coming in lighter for the rematch with Joshua could help him, because it’s believed that AJ will try and take the fight the full 12 round distance. The Joshua-Ruiz Jr. rematch will be taking place in the UK, and if goes to the scorecards, Joshua will have an excellent shot at winning a decision. In other words, Ruiz Jr. will need to be lighter on his feet for him to get to Joshua to force him to brawl like last time. Ruiz wants a war of attrition, because he’s got the better engine. Joshua looked fit, but huge muscles aren’t useful for a fast pace fight. Boxing is a cardio sport, and Joshua’s body isn’t designed for that.

Kownacki wants to beat Arreola better than Deontay Wilder did »