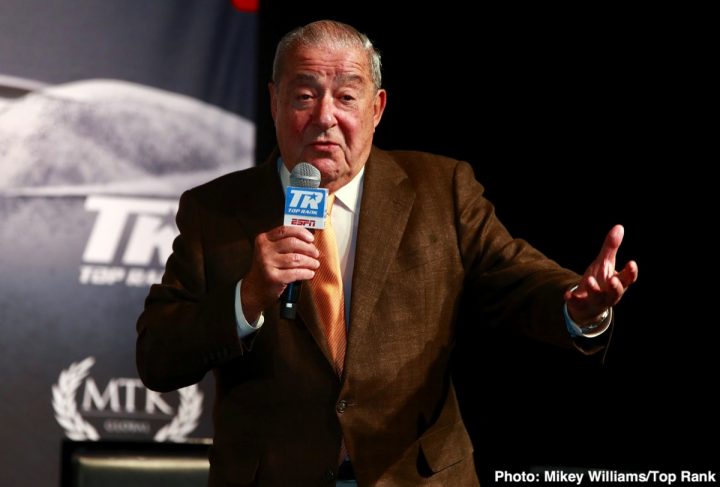 By Kenneth Friedman: Top Rank promoter Bob Arum is highly critical of how British heavyweight Dillian Whyte’s recent alleged positive drug findings were handled by the British Boxing Board of Control, and Matchroom for his fight against Oscar Rivas on July 20.

Arum says the Whyte-Rivas fight should have been canceled after Whyte’s test results came up positive. Matchroom promoter Eddie Hearn says they had a hearing with an independent panel on the morning of the fight. Arum states that Rivas, and his manager Yvon Michel should have been informed about the hearing. 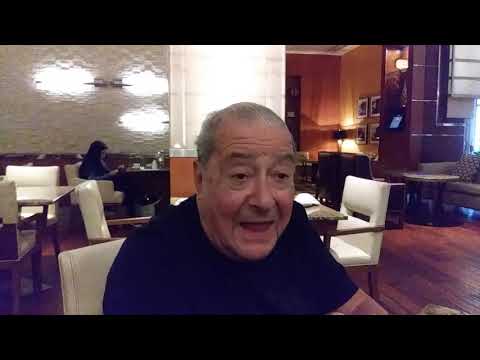 “They certainly had the obligation to notify Oscar Rivas, and his management,” said Top Rank promoter Arum to Barbershop Conversations about the British Boxing Board of Control and/or Matchroom needing notify Rivas about Whyte’s alleged positive test for PEDs. “That was an absolute disgrace to boxing, and to British boxing. Something is wrong here, and they have to be investigated. It wasn’t only the performance enhancing drugs, but what about they did with the gloves. And what about the referee when Rivas has him [Whyte] in trouble in the last round, breaking it up every 20 seconds, and warning him.

One, they shouldn’t have allowed him [Whyte] to fight. Two, the gloves. They approved certain gloves, the fighters. Then the guy comes in, Dillian Whyte, with another brand of gloves, and he has them on, and they say, ‘Too late.’ Too late, what? Those aren’t the gloves we approved, and then they didn’t even allow him to examine the gloves after the fight. What does that tell you? It tells you that all they give a s–t about is their own fighters. They turned this into a seedy business, and for the BBBofC, they had such a sterling reputation, for them to do something like this is a disgrace,” said Arum.

Whyte’s use of a different pair of gloves rather than the ones that had been approved by Rivas’ team sounds odd. Arum says Rivas’ team were told that it was “too late” for them to examine his Whyte’s gloves once he had them on, and they couldn’t examine them afterwards as well. If this is true, it’s surprising that Rivas went through with the fight under those conditions.

The downside of all of this, besides Rivas’ own situation, is a lot of fighters aren’t going to want to fight in the UK now. If they believe that their British opponents have a different set of rules than the ones that they must abide by, they’re not going to want to fight there. IBF/WBA/WBO heavyweight champion Andy Ruiz Jr. is already dragging his feet about fighting a rematch with Anthony Joshua in the UK. Arum says he’s now worried about his fighter Vasiliy Lomachenko coming over to the UK to fight next month.

Arum: They let Rivas fight someone who tested dirty

“And why am I so upset, because I’m in boxing firstly, and secondly I’ve got [Vasily] Lomachenko going over to fight on August 31st [to the UK],” said Arum. “These guys are going to figure out ways to screw Lomachenko, but Lomachenko is so good that you can’t beat him. Let them figure it out [Rivas and his promoter]. They have lawyers, Oscar Rivas and Yvon Michel. They’re going to figure it out. You have to wait for the B-sample, and I think it’ll end up to be a no contest. But I think there’s other liability, criminal liability, a big civil liability. I think so. The fact that they had him go in with a fighter that tested dirty. I think the fact that it was unfair competition by giving the other fighter the edge.

I think you’re making it a no contest, but you’ve got to pay damages for that. If he’d [Rivas] been hurt in that fight, Rivas, and then his insurance company wouldn’t pay, because the guy he’s fighting had PEDs, and everybody knew about it. The British Boxing Board of Control, they’re supported by promoters, but they take the place of a commission. That would be like a state commission,” said Arum.

Whyte’s B-sample still hasn’t been checked yet. If that shows up negative, then it’s anyone’s guess what went wrong with the A-sample for it to come up with a different result in allegedly testing positive for a performance enhancing drug. If the B-sample tests positive, there will be problems for Whyte, and potentially Matchroom and the BBBofC.

Arum wonders why Rivas wasn’t at the hearing

“How can you have a hearing without the other side? How do you not bring Rivas in and hear from them?” said Arum. “Doesn’t he have a right to have his position? They called him when he [Whyte] tested positive. Somebody from Matchroom called Rivas or Yvon Michel, and said the fight might not happen. They don’t say why, and so Yvon Michel said he thought Whyte had been injured. And then they called Yyon Michel back the next day, and said, no, everything is okay. But he had no idea what this was all about, whether it was drugs or anything. They found out about it after the fight. I knew about the gloves before, but I didn’t know about the drugs,” said Arum.

The hardest thing for boxing fans to try and understand is why Rivas wasn’t told about Whyte’s test. Fans wonder if the situation was reversed and Rivas was the one that allegedly tested positive, would Whyte be told? If it’s a rule in the UK that fighters’ opponents not be told about test results, then that’s something that needs to change. Perhaps this will change after this fight.

Arum is predicting that the result of the Whyte vs. Rivas fight will be changed to a no contest if the B-sample tests positive for PEDs. Whyte (26-1, 18 KOs) beat Rivas (26-1, 18 KOs) by a 12 round unanimous decision to earn the mandatory position to challenge WBC heavyweight champion Deontay Wilder. If the fight is ruled a no contest, then Whyte will lose his mandatory status.


« Hughie Fury vs. Alexander Povetkin in the works for Aug.31 on Lomachenko-Campbell card