Kownacki wants to beat Arreola better than Deontay Wilder did 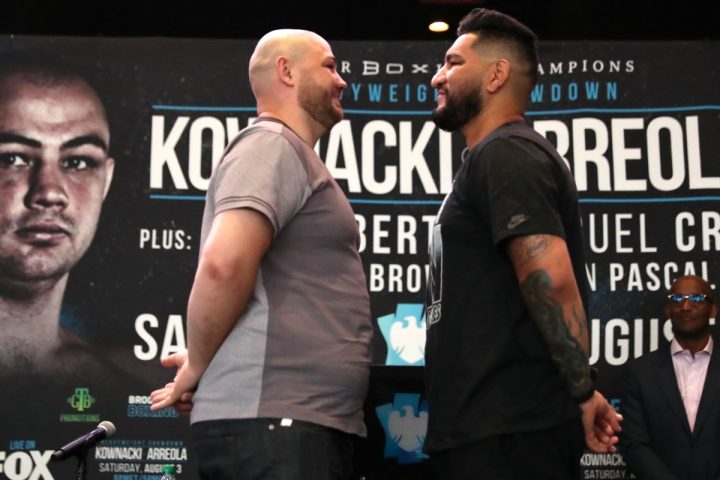 Arreola, 38, and Kownacki will be squaring off this Saturday in the main event on FOX PBC Fight Night at the Barclays Center in Brooklyn, New York. The fight event starts at 9:00 p.m. PT.

The unbeaten highly ranked Polish heavyweight Kownacki (19-0, 15 KOs) plans on knocking out Arreola much faster than Wilder did. Kownacki has already done a better job in beating former Wilder opponents Artur Szpilka and Gerald Washington. It took Wilder nine rounds to knockout Szpilka, and five rounds to stop Washington. In contrast, Kownacki knocked out Szpilka in four rounds, and Washington in two rounds.

Kownacki wants to make a statement against Arreola

“I think if I could beat him in a better fashion than Deontay beat him before, then that’s a good statement,” said Kownacki in discussing his goal for the Arreola fight. “I have been with two guys that Deontay Wilder fought with Artur Szpilka and Gerald Washington,” said Kownacki. “It took Wilder ten rounds to knock out Artur Szpilka in a very competitive fight when I just walked right through him. And the same thing with Gerald Washington. I knocked him out in two rounds. My next fight against Chris Arreola, another fight Wilder and I have in common, and I plan to do the same thing, walk right through him,” said Kownacki.

Wilder mainly used his left jab against Arreola, and that’s one of the reasons the fight went eight rounds. Deontay had been having hand problems his right power hand, that limited the amount of shots he could hit Arreola with. Wilder’s left hand power isn’t extraordinary.

Kownacki believes that a fast knockout win over Arreola will help validate him in the eyes of the boxing public. He’s using this contest as a “statement” fight to showcase his talent. The overall goal for Kownacki is to show the fans how he compares to WBC world champion Wilder.

In Arreola’s last two fights, he’s gotten his weight down, and looked impressive in Jean Pierre Augustin and Maurenzo Smith inside the distance. Against Augustin (17-1-1, 12 KOs), Arreola came in at a trim 239 pounds, and he destroyed his previously unbeaten opponent in three rounds. Although Arreola has been lighter than this during his career, he never looked as physically good. One could tell in looking at Arreola that he was in far better shape for the Augustin contest than he was against Wilder in 2016. The way that Arreola has performed in his last two fights, he’s got an excellent shot at beating Kownacki.

Tickets for this Saturday’s Kownacki-Arreola fight can be purhased at Ticketmaster.com. Additionally, fans can purchase tickets at the Barclays Center at the American Express Box Office.

Jessie Vargas vs. Jaime Munguia in negotiations for September on DAZN »