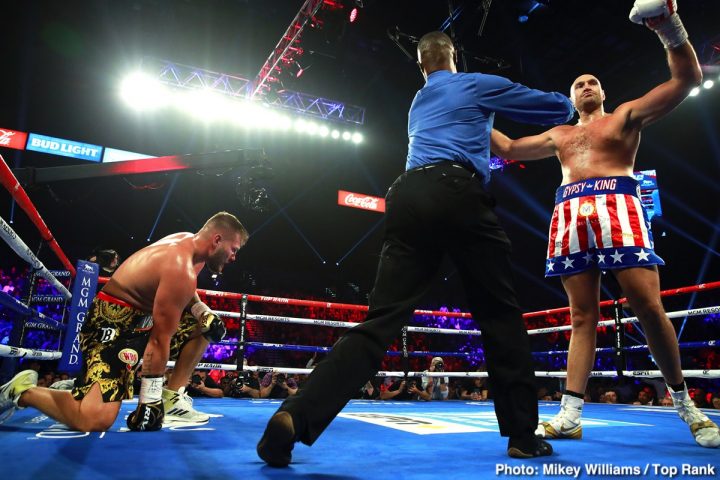 By Charles Brun: In a horrible mismatch, lineal heavyweight champion Tyson Fury (28-0-1, 20 KO) crushed the obscure badly over-matched Tom Schwarz (24-1, 16 KOs) in a second round knockout on Saturday night on ESPN+ at the MGM Grand Garden in Las Vegas, Nevada. Referee Kenny Bayless officially stopped the fight at 2:56 of round 2.

Fury, 30, knocked the slow as molasses Schwarz down in the second round after hitting him with a combination to the head. Schwarz got back up and was unloaded on by Fury. The referee then stepped in and halted the massacre. The official time of the stoppage was at 2:54 of round 2.

The stoppage came a little early by referee Bayless. He could have let it go a little further, as Schwarz was covering up on the ropes at the time. Fury was just throwing arm punches, and not landing much with anything of power on it. Schwarz’s nose was bloody after having been hit with a left hand earlier in the round by Fury.

In round two, Fury turned southpaw and still dominated the 6’5″ Schwarz. Fury wouldn’t have been able to do that against the elite level heavyweights in the division, but this wasn’t one of the top fighters in the weight class. Although Schwarz came into the fight ranked #2 with the World Boxing Organization, he didn’t deserve that inflated ranking. Schwarz had a padded record of 24 fodder opponents on his resume coming into tonight’s fight. In truth, Schwarz probably shouldn’t have been ranked at all in the top 15, let alone at #2 with the WBO.

NEWS:   Dillian Whyte could lose out on Tyson Fury fight

Schwarz looked like the faster of the two in terms of hand speed, but Fury had the size going for him. He was getting away with an illegal tactic of holding his lead arm out in front of him to keep Schwarz from getting close enough to land his shots. The referee didn’t want Fury for this illegal tactic, but he should have. Fighters aren’t supposed to be able to do that. Fury gets away with it though in all of his fights.

Fury’s trunks were pulled up too high

The referee Bayless didn’t say anything about Fury’s trunks, which were pulled up to cover half of his midsection. Fury being allowed to have his trunks pulled that high meant that Schwarz had a smaller target to aim for when throwing body shots; not that he threw any though. Hopefully, doesn’t continue to have his trunks pulled up that high in his future fights, because it limits where fighters can hit him.

We saw a much more aggressive Fury tonight against the over-matched 25-year-old Schwarz than we’d seen in his previous fight against WBC champion Deontay Wilder last December. It’s understand why. Schwarz showed no punching power to speak of in the fight, and this allowed Fury to fight aggressively. Fury couldn’t do that against Wilder, because he would have gotten clocked by his shots. Fury had the perfect opponent in front of him tonight in the light hitting Schwarz.

The ESPN commentators were highly complimentary of Fury during the entire broadcast, but what they didn’t say is whether he’s improved enough for him to beat Wilder. Based on what this writer saw tonight, Fury looks far worse than he was in the Wilder fight. He was carrying extra fat, which he tried to hide by pulling up his trunks to the level of his rib cage.

It looked extremely odd with Fury’s trunks pulled so high, but he was the A-side tonight in the promotion. Fury got away with stuff that he likely wouldn’t if he were facing Wilder, Andy Ruiz Jr. or Anthony Joshua. Fury’s conditioning looked less than what should have been for this fight. Fury appeared to be at 60% of maximum.

Why Fury couldn’t put in the effort to get in top shape is a question you have to ask him. If you can’t bother to get in the best possible shape for you’re fights, then it’s on you. Fury perhaps doesn’t want to deny himself the pleasure of eating rich foods or foods excess. He should have done more cardio to burn off the fat he was carrying around. It wasn’t just fat on Fury’s midsection. He had loose fat everywhere, which isn’t surprising because he weighed in at 263 pounds.

Fury will be fighting in October or November

Top Rank Boxing plans on bringing Fury back in the next four to five months to fight on ESPN in another fight designed to increase his popularity. There’s no official word about who they plan on matching against Fury, but it’s likely someone on the level as Schwarz. This is all about making Fury look good rather than having him fight in competitive match-ups. It’s the same stuff we’ve seen in the past with heavyweights that are fed poor opponents to make them look good in order to increase their popularity.

NEWS:   Tyson Fury fires back at Dereck Chisora for picking Joshua to beat him

It’s been done forever. Top Rank promoter Bob Arum promoted George Foreman during the second part of his career, and he fought a lot of stiffs before stopping IBF/WBA heavyweight champion Michael Moorer by a 10th round knockout in November 1994 to become two-time heavyweight champion. Before Foreman had even fought Moorer, he had become popular beating anyone good.

Other boxing results on the card

Jesse Hart defeats Sullivan Barrera by 10 round unanimous decision. Barrera, 37, knocked down in round 8.