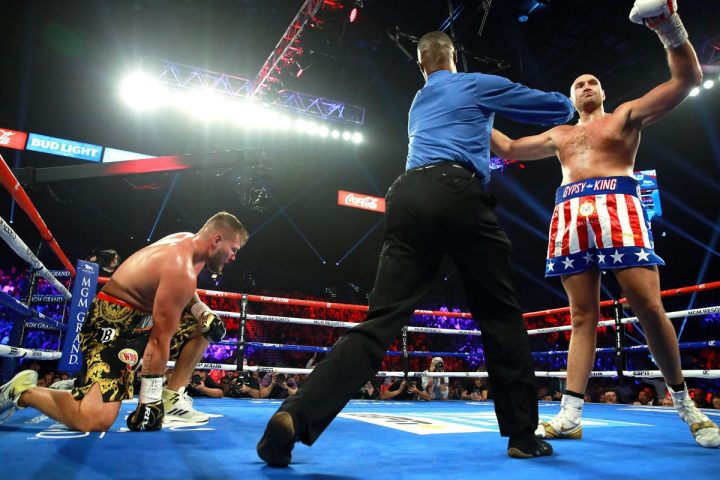 By Allan Fox: Tyson Fury’s fight against Tom Schwarz last Saturday night sold 5,489 tickets with a gate of $882,145 for their match at the MGM Grand Garden Arena in Las Vegas, Nevada.

There were reports of over 9,000+ fans in attendance on the night for the 16,800 seat MGM Grand Arena. However, those fans appear to have been comps. During the Fury vs. Schwarz broadcast, the camera ESPN+ seemed to show a full Arena. It’s unclear whether the camera only panned on areas where there were large groups of fans or what.

A lot of work was done by ESPN and Top Rank to help promote the event to make it a huge fight. But based on the 5,489 tickets sold for the arena that seats 16,800, it appears that Top Rank Boxing has a lot of work to do to turn Tyson Fury into a star in the United States.

What these numbers suggest is it takes more than just promotion to make an event a success in boxing. More than anything, it requires good old fashioned match-making. This wasn’t one of those ‘if we build it they will come’ type promotions.

The fans would have likely turned out in huge numbers if Top Rank had matched Fury (28-0-1, 20 KOs) against WBC heavyweight champion Deontay Wilder. The venue would have surely old out if Top Rank had made that match-up. Picking the little known Schwarz (24-1, 16 KOs) as Fury’s opponent wasn’t a good idea.

Fury was frequently refereed to as the “lineal heavyweight champion”

The ESPN commentators continuously refereed to Fury as the “lineal heavyweight champion” during the week of the fight, and during the broadcast itself. A fighter has never been marketed like that before. In hindsight, that might not have been a good idea, because it came across like ESPN and Top Rank were trying to hard to hype a belt-less, non-world champion by making him into the equivalent of a world champion.

NEWS:   Deontay Wilder was punch drunk against Tyson Fury from shot to the ear

Fury calling himself the lineal champion seems pretentious and artificial. Whatever “lineal” title that Fury had should have evaporated a year after he’d been out of the ring. Fury didn’t fight for close to three years after narrow win over 40-year-old Wladimir Klitschko. In the meantime, Fury lost all three of his world titles with them being stripped from him one by one. He arguably should have been stripped of his lineal heavyweight title.

Making Fury’s “lineal” status seem so grand looked like he was being marketed as a product that was being sold to the public. It might have been better for Top Rank and ESPN to just focus on the fact that Fury used to be a champion, and that he’d been out of the ring for several years.

The knowledgeable boxing fans didn’t see Fury as any kind of champion last Saturday. They just saw him as a fighter trying to rebuild his career after a long layoff. Further, ESPN and Top Rank frequently mentioned how Schwarz was ranked #2 with the World Boxing Organization. This was obviously done to validate Schwarz as a good opponent for Fury. The fact is, Schwarz was a poor opponent, and that was clear from watching some of his previous fights. Schwarz was just a guy with an unbeaten record built on fluff opposition, and an elevated ranking by the WBO.

Top Rank and ESPN should forget about wasting time talking about how Fury is the lineal heavyweight champion, and put a lot more effort into good match-making for him. It’s obviously harder than Top Rank originally thought it would be for them to turn Fury into a star in the United States. They can’t do it based on his personality alone. Bob Arum mentioned frequently how George Foreman became popular in the second part of his career with his joke-telling outside the ring, but it was a different era back the in the 1980s and 1990s.

Foreman was from the U.S, an Olympic gold medalist, and former heavyweight champion. Foreman won his heavyweight belt in 1973 in destroying a prime Joe Frazier in two rounds. Fury just scraped by beating an old 40-year-old Wladimir Klitschko in a painfully boring 12 round decision in 2015. There’s no comparison to the type of heavyweight Foreman was in his youth compared to Fury. Even in the second half of Foreman’s career, he interesting to watch. His power kept as one of the relevant fighters in the heavyweight.

Top Rank arguably picked the wrong guy to try and turn into a star in the U.S in signing Fury. That might explain why Arum is now interested in matching Fury with Wilder at the end of 2019 instead of waiting until early 2020 before making the rematch. Fury should be fighting these guys:

Fury needs to be fighting in smaller arenas

If Fury continues to attract smaller crowds, Top Rank will need to consider having him fight in smaller arenas. It’s a waste for Fury to fight at the MGM Grand if he’s only going to pull in 5,000+ fans. At least if Fury is fighting in tiny halls, Top Rank can continue matching him against fighters like Tom Schwarz without the arenas being two-thirds empty on the night of the fight. Top Rank should be booking smaller arenas that would work for the small crowds that turn out.


« Will Pacquiao’s anger against Thurman help him win?