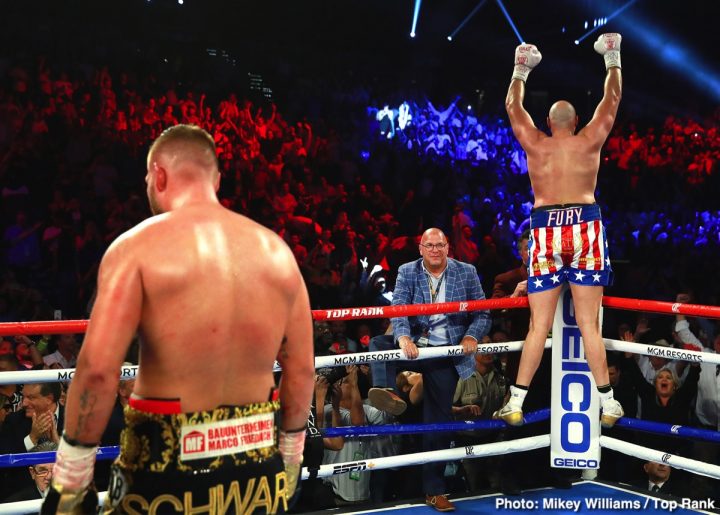 Fury made it clear for the Wilder rematch to happen, he’s going to have to get a better than 50-50 deal against him in early 2020. In other words, Fury wants to be the A-side in the negotiations with Wilder, and get the lion’s share of the loot.

That means the Wilder vs. Fury rematch isn’t going to happen. Oh well, hopefully, Top Rank Boxing has a lot of Schwarz level guys for Fury to keep defending his lineal heavyweight title against until his contract with them expires. Top Rank promoter Bob Arum is going to have to talk some sense into Fury or else he’s going to be stuck fighting obscure guys for the rest of his career, because he’s not going to grow popularity enough to demand better than a 50-50 deal against Wilder, Andy Ruiz Jr. or Anthony Joshua. If Fury works his way to a mandatory position to challenge for a world title, he still won’t get a better than 50-50 deal.

It requires wins over quality opposition to become popular, and Fury hasn’t been beating those type of guys since his comeback in 2018. In Fury’s three wins since he returned to the ring after a three-year absence, he’s beaten these guys: Sefer Seferi, Francesco Pianeta and Tom Schwarz. None of those guys belong ranked in the top 15.

You hate to say it but Schwarz looked like a joke tonight. I goes without saying that Fury holding the lineal heavyweight title, which there is no actual physical title, won’t lead to him getting the bigger money split against elite level guys like Joshua, Wilder and Ruiz Jr. Fury needs to come down off of his high horse, because his win over Schwarz tonight seems to have planted some ideas into his head.

Wilder isn’t going to agree to taking the smaller money for a fight with Fury. Unfortunately, it looks like Fury is going in the same direction as former IBF/WBA/WBO champion Anthony Joshua, who was offering Wilder less than a 50-50 deal, which is one of the reasons why the two of them never fought, and might not ever fight. Wilder and Fury fought last December with a 50-50 split in a fight that was scored a draw.

A lot of boxing fans thought Wilder was robbed in that fight, as he landed the harder shots in each round, and then knocked Fury out in the 12th round. Some boxing fans believe the referee gave Fury a long count.

Fury’s promoter Bob Arum of Top Rank Boxing is planning on putting together the rematch with Wilder and Fury in early 2020, possibly in Las Vegas, Nevada. Of course, that’s if Arum can put together the fight. If Fury is going to muddy the water by demanding a 55-45 or 60-40 deal, then he’ll end up with nothing. He’ll go after the winner of the Andy Ruiz Jr. vs Anthony Joshua rematch.

Ruiz Jr. is now the IBF/WBA/WBO heavyweight champion after stopping Joshua in the seventh round on June 1. However, Ruiz Jr. isn’t going to agree to less than a 50-50 deal with Fury either. As such, if Fury wants to take the lion’s share of the loot, he’s going to need to keep fighting guys like Schwarz, because he’s not going to be able to force any of the world champions to accept less than a 50-50 fight with him.

“I came here to enjoy myself. I was slipping and sliding with my hands down. I showed to the world I can put anybody away,” said Fury. “I put on an extra 12 pounds. I really feel it. I didn’t have three years out of the ring. This time I only had three months. The Mac is back, the lineal champion. Bob [Arum] will tell you. We’re coming back on September 20th or October 5th, and then next year we’re going to hold down Deontay Wilder and make him give me his green belt. We’re going to fight Deontay Wilder early next year,” said Fury.

Fury’s promoter Arum said at the post-fight news conference on Saturday night that he thinks the Wilder-Fury rematch in early 2020 will eclipse the 4.5 million PPV buys that the Floyd Mayweather Jr. vs. Manny Pacquiao fight brought in back in 2015. Arum believes the Wilder vs. Fury 2 fight will become the all time biggest boxing pay-per-view event in the history of the sport. Arum had said earlier this week that he thought the Wilder-Fury rematch would do 2 million buys, but it looks like he’s now changed his tune, and believes the fight can break records. Here’s the problem: Wilder vs. Fury brought in only 350,000 buys last December.

To go from 350K to 4.6 million buys by early 2020 is just too big of a leap up. If Top Rank is going to feed Fury another Schwarz-like opponent in September or October for him to fight in a showcase [read: mismatch] match on ESPN+, he’s not going to increase his popularity to any great extent. The casual boxing fans know what they saw tonight. It was a sot opponent put in with Fury to make him look good. If Top Rank wanted to really test Fury, they would have matched him against someone like Dillian Whyte, Joseph Parker, Joe Joyce, Alexander Povetkin, Luis Ortiz or Adam Kownacki.

It’s pretty hard to imagine the rematch between Wilder and Fury doing even 1.5 million buys. Fury doesn’t have the name recognition that Mayweather and Pacquiao had going for them when they fought in 2015. These guys had been fighting in the U.S forever at the time they fought. They didn’t just start fighting there. Mayweather is from the U.S, and he fought in the Olympics.

Pacquiao had been fighting in the U.S for any years, and he slowly built up his popularity there the hard way over time by beating increasingly better opposition each time out. In contrast, Fury has fought in the U.S just twice against Wilder and now Schwarz. Wilder was an excellent opponent for Fury, but tonight’s opponent Schwarz was just godawful. The thought that came to this writer’s head when watching the fight was, ‘where on earth did Top Rank find Schwarz?’ and ‘why did they pick this guy. He can’t even fight, and looked horrible.’