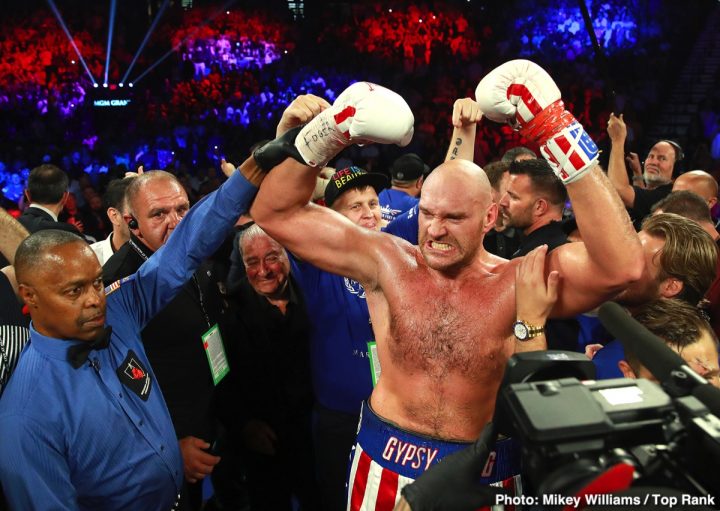 By Aragon Garcia: Tyson Fury beat back the threat of unknown German fighter Tom Schwarz in stopping him in the second round in an embarrassingly bad mismatch last Saturday night on ESPN+ at the MGM Grand Garden Arena in Las Vegas, Nevada.

After the fight, Fury told the boxing media at the post-fight news conference that he’s willing to face IBF/WBA/WBO heavyweight champion Andy Ruiz Jr. if he defeats former unified champion Anthony Joshua in their rematch later this year. Fury still needs to win his October fight, and then beat WBC heavyweight champion Deontay Wilder in a rematch in the first quarter of next year. That won’t be easy for Fury to accomplish, because Wilder appears to have his number. Wilder had Fury down twice on the canvas last December, and arguably should have been a knockout win.

Fury said at the the post-fight news conference that he feels that he and WBC champion Deontay Wilder would beat Ruiz, 29, “quite comfortably.” Fury added that he’s not “afraid” of Ruiz. The way that Fury fought last night, Ruiz would have little problems getting to his chin to land with his fast combinations. Fury looked fat, slow and out of shape against Schwarz. The speed wasn’t there for Fury, but he’s never been a fast heavyweight. He’s just tall at 6’9″, and he uses his height and long reach to control his shorter opponents.

Here’s what needs to happen for Fury and Ruiz to fight each other:

1. Fury must win his next fight in September or October. That fight is expected to be against a much better opponent than the German fighter Schwarz, who looked dreadfully poor. There’s talk of Fury possibly facing 38-year-old former heavyweight world title challenger Kubrat Pulev in October. That would be a tough fight for Fury, because Pulev is an actual world class fighter, unlike Schwarz, who fought like someone that didn’t rate being even in the top 100 best heavyweights.

On a side note, kudos to Top Rank for scouring the heavyweight division to find the little known Schwarz for Fury to look good against. Fury did a bang up job destroying Schwarz in rapid fashion. Unfortunately, the fight was so horribly one-sided that it did nothing for Fury’s profile in the U.S. The fans in the U.S weren’t born yesterday. They know a mismatch when they see one, and this was a textbook version of that.

2. Ruiz needs to win his rematch with Joshua later this year in October or November. That’s not going to be easy for Ruiz to win the second fight, because it’s likely going to take place in the UK. If there’s a referee assigned to the fight that prevents inside fighting, Joshua will have a good chance of winning. Referees are supposed to allow inside fighting, but as we saw in Joshua’s unification match against former WBO champion Joseph Parker last year in the UK, some referees are in the dark about this.

The Wilder-Fury fight probably should have been stopped on the spot, but the referee gave a count to a fast asleep-looking Fury instead of stopping it. Wilder was the better fighter in every round of the fight, and was given a bad deal by the three judges working the fight.

Wilder would be wise to make sure the rematch with Fury takes place in Las Vegas, Nevada rather than going back to the same place as their fight last December in Los Angeles, California. Having a different referee would also be in Wilder’s best interest for the rematch with Fury. Some boxing fans believe the referee bent over backwards to allow Fury to continue fighting after he was knocked out in the 12th round by Wilder.

“No disrespect to Andy Ruiz. He did a great performance, but he’s locked into a contract with Joshua,” said Fury when asked if he’d be willing to fight Ruiz Jr. next. “I think me and Wilder beat Andy Ruiz quite comfortably. If he beats Anthony Joshua in the rematch, he’s next in line. Whoever wins between me and Wilder fights Andy Ruiz. I don’t see why these fights can’t be made. There’s nothing I see of Andy Ruiz that makes me afraid. I think it could be a great fight, a good match-up of styles,” said Fury about Ruiz.

It’s not a good idea for Fury to be looking beyond his next two fights towards a match against Ruiz. There’s a good chance that Fury will win his next match, because his co-promoters at Top Rank will probably put him in with another unbeaten fighter with an inflated ranking and record.

Unfortunately for boxing, there are loads of unbeaten, weak heavyweights in the top 15 that Fury would completely embarrass. Guys like Schwarz are a dime a dozen in the top 15 at heavyweight. But if Top Rank wants to match Fury against someone that actually fight like Dillian Whyte, Filip Hrgovic or Joe Joyce, then there might be a problem for him.

Those fighters aren’t poor heavyweights like Schwarz. Top Rank probably won’t let Fury fight any of those contenders, because they might beat him or make him look bad. It’s important that Fury looks good, because Top Rank is trying to turn him into a star in the U.S. You can’t do that if Fury is losing to his opponents or struggling badly to win. There’s no question that Fury would struggle against the likes of Whyte, Hrgovic and Joyce. Even a young fighter like Daniel Dubois would give Fury serious issues.

The still unbeaten Fury landed 45 of 158 shots for a connect percentage of 29%, according to CompuBox. Schwarz connected on just 6 of 30 punches for a 20% connect rate. It’s hard to believe that the hapless Schwarz landed only six punches in the entire fight, but that’s the reality of what happened last night. The fight, if you want to call it that, was a massacre in every sense of the word. This is what happens though when promoters pick out a soft opponent for their fighters to look good against.

You get poor matches like Fury vs. Schwarz. This is the type of opponent that would have been fine for Fury to be facing in his first couple of fights as a pro 10 years ago, but not now at this stage in his career. Forget about the inflated ranking the World Boxing Organization gave Schwarz, the guy looked like he didn’t belong in the top 200 in the heavyweight division. The way that Schwarz struggled to beat journeyman Senad Gashi last year was a big hint that he didn’t deserve to be ranked at the #2 by the WBO.

Sometimes the promoters go a little too overboard in selecting someone too weak, and the fight ends up being a slaughter. That’s bad news for boxing, and for the fighter that is trying to gain popularity. You don’t gain anything in beating horrible opposition. It just makes fans wonder why promoters are making a fuss about a mismatch.

Fury is 30-years-old now. He shouldn’t need to be matched against woefully bad opponents like Schwarz at this point in his career. It’s a waste of Fury’s time, as well as the boxing fan that bothered to sit down and watch his fight last Saturday night. The main event was bad, and the co-feature between Jesse Hart and Sullivan Barrera was equally bad. Hart looked like a knockout waiting to happen in beating the 37-year-old Barrera at light heavyweight.

Arum: Fury is a force of nature

“That was amazing. Tyson Fury is a force of nature,” said Fury’s promoter Bob Arum at the post-fight news conference. “This was one of the great shows I’ve ever seen and not just because of the boxing. He’s an entertainer. He is truly unique. Now that he’s in shape, he can knock out every heavyweight in the world. Deontay Wilder is not going five rounds with him. We will have another fight, then we will fight Wilder.”

Fury defeated the 25-year-old Schwarz in front of a respectable crowd of 9,012 fans at the MGM Grand Garden Arena in Las Vegas, Nevada. It obviously wasn’t the crowd that Fury’s promoter Bob Arum of Top Rank Boxing had been talking about.

Arum had predicted a sellout crowd by Saturday night for the Fury-Schwarz fight, but it fell far short of that mark. The MGM Grand Garden Arena seating capacity is 17,157, so the crowd of 9,012 was roughly half of that total. In other words, the fight had a crowd that filled 50% of the arena. That’s not a good sign for Fury taking America by storm, as Arum was hoping.

Those numbers don’t suggest that Fury is attracting the kind of interest that he needs to for him to be a worthwhile opponent or Wilder or Ruiz Jr. You still have to call Fury an opponent, because it doesn’t mean anything for him to be called lineal heavyweight champion. There’s no real belt there. It just means Fury beat an old an old shot guy in 40-year-old Wladimir Klitschko when he on his last legs after a long pro career in 2015.