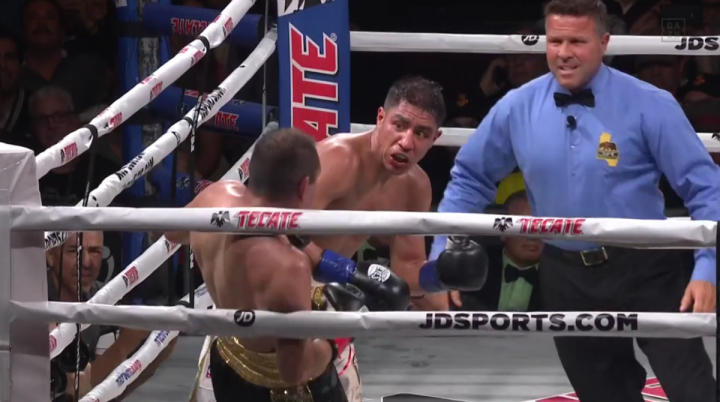 By Barry Holbrook: Jessie Vargas (29-2-2, 11 KOs) wants a title shot against unbeaten WBO junior middleweight champion Jaime Munguia (33-0, 26 KOs) later this year if the young Golden Boy promoted fighter doesn’t choose to face Dennis Hogan in a rematch to clear up the controversy of their recent fight last month on April 13th at the Arena Monterrey, in Monterrey, Mexico.

Munguia, 22, beat Hogan by a 12 round majority decision, but it was one of his worst performances of his young career. Hogan’s management appealed the decision to the World Boxing Organization, who assigned a panel of five independent judges to review the fight and score it themselves. They gave the win to Munguia. However, Munguia might still give Hogan, 34, a rematch to put things to rest.

“The next step is for a world title and very possibly Jaime Munguia,” Vargas said to ESPN.com. “It’s very possible that fight will happen…I highly believe the fight will be made.”

Vargas, 29, would be going into a title fight against Munguia with just one fight at junior middleweight against 38-year-old Humberto (69-10-2, 37 KOs), who he defeated by a sixth round knockout last Friday night on April 26 in a catch-weight fight at 151 pounds at The Forum in Inglewood, California. The win for Vargas was his first in two years since his 10 round unanimous decision victory over journeyman Aaron Herrera (36-9-1, 25 KOs) on December 15, 2017. Vargas fought to two 12 round draws against Adrien Broner and Thomas Dulorme in 2018.

It’s unknown why Vargas’ promoters at Matchroom Boxing USA chose to pit him against former two division world champion Soto for his first fight at 154, because Soto is not a junior middleweight. It was a strange move. Additionally, Soto has spent much of his career at 126 and 130. He’s not a junior middleweight. Does Vargas deserve a title shot at 154? Probably not. He would be getting the fight just based on what he did in the past in winning world titles at 140 and 147 in beating Khabib Allakhverdiev and Sadam Ali.

“We have a short list, but [Vargas] is a bigger name, better name,” Golden Boy Promotions president Eric Gomez said to ESPN.com. “I love that fight. It’s makeable…He’s got a good name, good record, ex-champion. Why not?”

It’s quite understandable why Gomez and Golden Boy Promotions would be open to a fight between Munguia and Vargas. It’s a very winnable one for Munguia. Vargas is a good welterweight, but he never one of the elite fighters in that weight class. Now that Vargas is moving up to 154, he’s going to be over-matched the talented fighters in the division. Even the non-elite level fighters at junior middleweight like Erickson Lubin, Carlos Adames, Liam Smith, Sergio Garcia and Kell Brook would likely have too much for Vargas.

Vargas has to heal up from a cut that he suffered in round two from a clash of heads in his fight against Soto. That cut required 12 stitches to close. If Vargas is going to fight Munguia for his WBO 154 lb title, then the match is likely going to need to wait until at least October or November. If Vargas rushes into the fight with Munguia in the summer, the scar tissue will likely open up once he starts getting hit, and he’ll have problems. The 5’11” Vargas didn’t have to worry about getting hit hard by the smaller much older 5’8″ Soto last Friday night, but it’ll be a different story when he gets inside the ring with the six-foot Munguia, who not only is big for the junior middleweight division, but he’s also young at 22, and very powerful. Munguia would be the complete opposite of what Vargas had to deal with against Soto.

Munguia didn’t look good against the 34-year-old Hogan in beating him by a 12 round majority decision on April 13, but that was a crafty fighter, who was hard for him to hit, and who stayed on the outside moving around most of the fight. Vargas doesn’t fight like that. He likes to stay in the trenches and trade shots. Of the champions at 154, Munguia is probably the most vulnerable of the belt holders at junior middleweight. If Vargas were to target IBF/WBA 154 lb champion Jarrett Hurd or WBC champion Tony Harrison, he would have problems taking their big power shots and handling their size. Vargas would probably wish he were back at 147.

Vargas looks too small and weak to be fighting at 154. He’s not a big puncher even at 147, and he failed to establish himself as one of the elite fighters in the weight division. Vargas moved up to welterweight in 2015, and immediately lost to Tim Bradley by a 12 round unanimous decision in his first fight in the weight class in June 2015. Vargas won the vacant WBO 147 lb title in stopping Sadam Ali in March of 2016. After that fight, Vargas got a big payday in losing to to Manny Pacquiao by a 12 round unanimous decision in November 2016. Since then, Vargas’ career has been floating along without him doing much in terms of winning against good fighters. Vargas took a year off from boxing, and then returned in late 2017 and defeated journeyman Aaron Herrera. Then after that, Vargas was involved in two 12 round draws against Adrien Broner and Thomas Dulorme before signing with Matchroom Boxing USA promote Eddie Hearn, who matches him against the smaller, older Humberto Soto in a catch-weight fight at 151 lbs last Friday. Soto is a good fighter, albeit an older and smaller guy. They’re not from the same weight classes.

If Golden Boy Promotions choose to match Munguia against Hogan in a rematch, then Vargas will need to decide what he wants to do. Vargas’ new promoter Eddie Hearn can continue to fight beatable opposition while he waits for Munguia to become available. Unfortunately, there’s not a lot of options for Vargas at 154. He’s not powerful enough to handle the talented junior middleweights like Jarrett Hurd, Jermell Charlo, Erislandy Lara or Tony Harrison. Other than Munguia, Vargas doesn’t have much of a chance of beating the good fighters. Munguia is probably going to be too big and powerful for Vargas, but he’ll get a nice payday against him. Vargas will probably need to move back down to 147 after he takes a bad loss at junior middleweight. He’s kind of in the same boat as Kell Brook, a fighter that is too small and weak for the junior middleweights. Brook is now looking to move back down to 147 to take on WBO welterweight champion Terence Crawford.