Tony Harrison vs. Jermell Charlo on June 23 LIVE on PBC on Fox 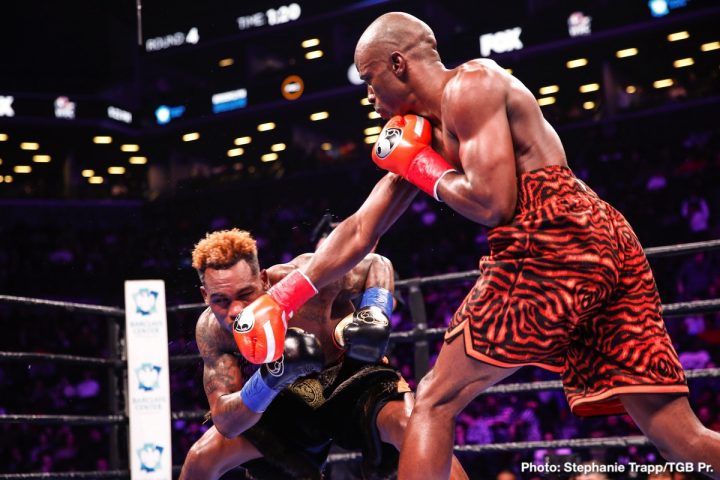 Tickets for the event, which is promoted by Lions Only Promotions, TGB Promotions and Mayweather Promotions, are on sale now and can be purchased at AXS.com.

Harrison and Charlo’s first encounter took place live on FOX in December as Harrison earned the decision and upset Charlo to earn the title. The close nature of the bout helped warrant an immediate rematch that promises to be just as highly charged and dramatic.

“Tony Harrison and Jermell Charlo showed off their elite talent to the world in their first bout and I anticipate an even more explosive showdown in the rematch on June 23,” said Tom Brown, President of TGB Promotions. “Harrison will no doubt be at his very best again as he looks to establish himself in the championship ranks. Jermell Charlo is certainly more motivated than ever to reclaim his spot atop the 154-pound division. Fans tuning in on FOX and FOX Deportes in primetime and in attendance at Mandalay Bay Events Center are in for an action-packed Sunday night.”

Harrison (28-2, 21 KOs) has proven to be “Detroit tough” during a boxing career inspired by early years trained and managed by the late Emanuel Steward. He had to climb back into title contention twice before reaching the top with his unanimous decision victory over Charlo last December.

Harrison was on track for a title shot before suffering the first loss of his career in 2015 to Willie Nelson. After three-straight wins, he earned a shot at the vacant 154-pound title against Jarrett Hurd. Although Harrison had strong moments in the fight, he eventually lost to Hurd and was forced to again climb to the top. After another three victories, including a win over former champion Ishe Smith, Harrison took advantage of his second world title opportunity against Charlo.

“Being a world champion now, I’m excited to defend my title for the first time in this rematch that everyone is looking forward to,” said Harrison. “I think there’s actually more pressure on Charlo, just like last time. It’s just a blessing for me to be fighting on FOX and FOX Deportes Sunday, June 23. Everyone is going to be tuned-in to this fight and we’re going to bring the action to Mandalay Bay in Las Vegas, the capital of the boxing world. I plan on doing the exact same thing to Jermell that I did in December. I’m going to get the win, and then I don’t want to hear any more crying or excuses.”

The 28-year-old Charlo (31-1, 15 KOs) suffered the first setback of his career with the close unanimous decision loss to Harrison. Fighting out of Houston, Texas, Charlo won the vacant WBC title with a devastating knockout victory over John Jackson in 2016. He made three successful defenses of the title with highlight-reel knockouts over Charles Hatley and Erickson Lubin, plus a majority decision win over former champion Austin Trout.

Charlo is trained in Dallas by Derrick James, who was recognized as the 2017 Trainer of the Year by Yahoo Sports and also works with welterweight champion Errol Spence Jr. Charlo is one-minute younger than his identical twin brother, Jermall, who is the WBC interim middleweight champion and a former 154-pound champion.

“I am in a ruthless state of mind. I am upset and this upcoming fight, I am going to give it 110 percent,” said Charlo. “I am way hungrier now than I was before. I am not desperate for a win because I know how to win. The judges gave me a bad decision because I didn’t get the knockout, but you don’t have to knock everybody out to beat them. He knows he didn’t beat me. He knows exactly what happened. He knows he can’t beat me. If I have to go in there and prove it again, I will.”

Rigondeaux (18-1, 12 KOs) will look to show off the masterful technical skills that made him a unified world champion and perennial member of the pound-for-pound list when he steps into the ring on June 23. A two-time Olympic gold medalist for his native Cuba, Rigondeaux made his name with victories over the likes of Nonito Donaire, Rico Ramos and Joseph Agbeko. The 38-year-old most recently knocked out Giovanni Delgado in January on FS1.

Fighting out of Tlalnepantla, Mexico, Ceja (32-3, 28 KOs) won an interim world title at super bantamweight in 2015 by stopping Hugo Ruiz in the fifth-round. The 26-year-old would lose the full title to Ruiz in their rematch in 2016, but has won two of three fights since, including a knockout of Anselmo Moreno.