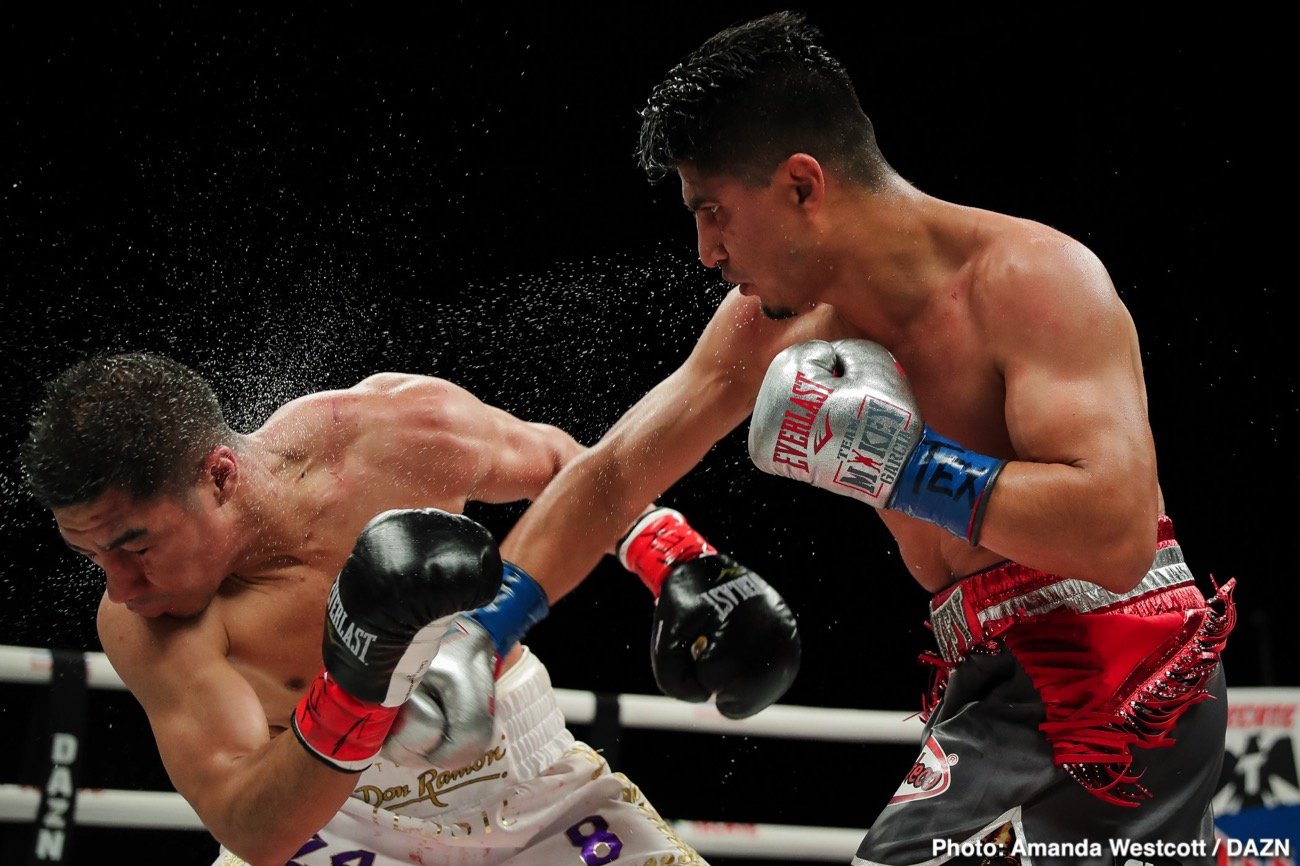 By Mark Eisner: Mikey Garcia (40-1, 30 KOs) used his power advantage over the size of Jessie Vargas (29-3-2, 11 KOs) in beating him by a 12 round unanimous decision on Saturday night on DAZN at The For Center at The Star in Frisco, Texas. Garcia, 32, knocked Vargas down in round 5 and hurt him in rounds 7 and 8.

“I thought I hurt him in the 4th round,” said Vargas after the fight. “It was a learning experience for me. I would like a rematch. And I think the knockdown made the difference. I would love a rematch. Yeah, I think he’s a great fighter. I underestimated his punching power. I think he can do well against the top welterweight,” said Vargas.

“And I did have to make adjustments to his size and power,” said Mikey about Vargas. “I started hurting him and closing the gap, picking up the timing and pace. I carried the weight well. Jessie is a big man. I could feel the weight, but my talent allowed me to overcome it. I would definitely love to fight Manny Pacquiao or a rematch against Errol Spence,” said Mikey.

It’s quite possible Mikey’s promoter Eddie Hearn will be able to put together a fight between him and Pacquiao for July in Saudi . That’s a fight that a lot of boxing fans would want to see.

Mikey landed 151 of 478 shots for a 32 percent connect rate. Vargas landed 142 of 671 shots. Both guys landed roughly the same amount of shots

In a pure beat down, former pound-for-pound king Roman ‘Chocolatito’ Gonzalez (49-2, 41 KOs) stopped WBA World super flyweight champion Kal Yafai (26-1, 15 KOs) by a 9th round knockout. Gonzalez, 32, dropped a tired and hurt Yafai with a tremendous right hand to the head in the 9th that sent him down flat on his back.

The referee Luis Pabon immediately halted the fight when he saw how hurt Yafai was. The time of the stoppage was at 0:29 of round 9. In the last seconds of round 8, Chocolatito knocked Yafai down with a right to the head.

Yafai looked hurt as he got back to his feet. Fortunately for Yafai, the round ended before Gonzalez could jump on him to try and finish him. It’s likely that if there was more time left in the round, Roman would have stopped Yafai, given how hurt he was.

Chocolatito wants to unify against Estrada

“I want to try and unify the titles. That’s my dream,” said Chocolatito after the fight. “God gave my title back. Thank God, my team brought me back. It did surprise me that he wanted to fight on the inside, but I was ready to go,” said Gonzalez in reacting to Yafai standing in front of him to trade in close.

Chocolatito did an excellent job of staying close to Yafai and forcing him to fight his fight in close. The high volume punching that Chocolatito used slowly wore Yafai down. In the early rounds, Yafai was smiling and firing back with his shots, but he was getting hit too much. By the 6th round, it was obvious something was wrong, and that couldn’t let Gonzalez hit him at the clip that he was nailing him.

Yafai lost his mouthpiece twice in the first three rounds after getting hit with uppercuts from Gonzalez. The impact from the short uppercuts that Chocolatito was hitting Yafai with on the inside was snapping his head back, resulting in him losing his mouthpiece.

Yafai was unable to keep Gonzalez off

The size difference between the two fighters was huge. Yafai looked much bigger than Gonzalez, and he appeared tired at the weight. It’s possible that Yafai took too much weight off in the process of dehydrating for the fight, and ended up listless after rehydration. Yafai’s corner was repeatedly telling him in between and during rounds to box Gonzalez, but he couldn’t do it.

It looked like Yafai wanted to box Gonzalez, but he couldn’t move well due to his weight. This was the biggest this writer has ever seen Yafai for a fight and clearly got the weight wrong. Recently, Yafai complained about being dead at the weight for his fight against Israel Gonzalez in November 2018. Tonight, it appeared that Yafai lost the fight on the weight more than anything.

Even when Yafai did attempt to box on the outside, Gonzalez came right at him quickly and worked him over with combinations. Yafai didn’t have the background to right a legendary fighter like Chocolatito on the inside.

Martinez, 25, dropped Harris with a right to the body in round 10. Harris showed a lot of toughness in getting up off the deck and taking the fight to Martinez the remainder of the round.

“It was a very tough battle,” said Martinez. “There is no fear. There’s no excuses. I will defend my title many times. He’s a very strong fighter. I know why he was undefeated. This is my title, and I want to defend it anywhere,” said Martinez.

Both fighters were amazing tonight. Martinez was relevant with his pressure, and his speed. Harris is an outstanding fighter, who looked like a smaller version of Josh Taylor.

It’s surprising that Harris hasn’t been talked about in the boxing world because he’s an incredible talent. The combination punching, the skills, speed and the toughness that Harris showed. He has out of this world ability. If Martinez didn’t have a steal chin, Harris would have knocked him out tonight.

As it was, Harris had Martinez hurt a couple of times. He just couldn’t land the right follow up shots to get Martinez out of there. Likewise with Martinez. He couldn’t finish Harris when he had him hurt from a body shot.

Martinez’s promoter Eddie Hearn of Matchroom Boxing USA is expected to try and set up a unification fight against WBO champion Kosei Tanaka. That would be a great fight for Martinez, as would a fight against IBF champion Moruti Mthalane. Martinez is a special talent.

If there’s anything to criticize tonight about Martinez’s performance was the way he held back with his attacking style. If you compare the way Martinez fought tonight to how he fought against Charlie Edwards, Cristofer Rosales, and Andrew Selby, it was like a different person.

Martinez didn’t go all out with his attacks the way he did against those guys. He never let up in those fights, which is why he was able to score fast knockouts. Tonight, Martinez was holding back, and picking spots to go after Harris. That didn’t work because it allowed Harris to get rest breaks and to use his technicality superiority.

Former WBO heavyweight champion Joseph Parker (27-2, 21 KOs) used his big size advantage to stop Shawndell Winters (13-3, 12 KOs). Parker dropped the 39-year-old Winters twice in the fight. In the 5th, Parker nailed Winters with a big right hand that sent him down on the canvas. Winter was sticking out of the ring through the canvas. When he got back up, the fight was stopped.

After the fight, Parker said he wants to fight Dereck Chisora or face Dillian Whyte in a rematch.

Unbeaten junior middleweight prospect Leo Ruiz Acevedo (7-0, 5 KOs) defeated Dennis Knifechief (12-12, 7 KOs) by a third-round knockout in their fight that was originally scheduled for six rounds. The big punching Acevedo trapped Knifechief against the ropes and then unloaded on him to get a stoppage.

In a great performance, unbeaten flyweight prospect Jesse Rodriguez (11-0 7 KOs) defeated Marcos Sustaita (12-3-1, 10 KOs) by an eighth-round knockout. The fight was stopped at 1:10 of round eight.

Rodriguez nailed Sustaita with a big left to the head in round 8, which sent him reeling backward. The hard-hitting Rodriguez then moved in and finished Sustaita off to get a stoppage.

Espino didn’t look great in the early rounds, but he looked great after the midpoint of the fight.

Pacheco wasn’t able to hurt Riojas until the sixth round when he nailed him with a hard right-hand shot that had him staggered. Riojas quickly regained his composure and was able to make it out of the round without

Riojas’ legs were gone and Pacheco landed several more punches, including a clean uppercut, but the bell rang to end the fight before he could do more damage. Pacheco looked like he ran out of time, as he had Riojas badly hurt as the bell sounded.

Junior middleweight contender Israil Madrimov (5-0, 5 KOs) put in an impressive performance in stopping Charlie Navarro (29-1-, 22 KOs) in the 6th round in a scheduled 10 round fight. Madrimov, 24, knocked the 40-year-old Navarro down twice in round 6. After the second knockdown in the round, the referee stopped the contest.

The first knockdown was from a hard body shot from Madrimov that put Navarro down on one knee. He barely beat the count in getting up. As soon as the action resumed, Madrimov immediately dropped Navarro with a hard left to the head. The referee then stopped the contest.

It was a good performance by Madrimov, who constantly bounced around, changing stances and angles to throw his shots from. However, Madrimov was getting timed by Navarro, and he was hit quite a bit. Madrimov would still give 154-lb champions Jermell Charlo and Jeison Rosario a lot of problems. Whether he would beat either of those fighters is unknown. Ideally, Madrimov needs to gain more experience before he faces those guys.

In an important fight, Mikey Garcia will be taking on a dangerous opponent in Jessie Vargas on Saturday night in their headliner bout LIVE on DAZN at The Ford Center at The Star in Frisco, Texas. Garcia has chosen to stay at 147 to prove his critics wrong that he’s too small for the division, but also he wants to face Manny Pacquiao in the summer

Chocolatito and Yafai battling to get Estrada fight

Yafai also wants to fight Estrada next. Tonight’s fight will weed out one of these. Yafai, 30, is banking his slight youth advantage over the 32-year-old Chocolatito to carry him to victory. This is a fight that will show how much Chocolatito has left in the tank.

Some believe that Roman is past his prime, but he’s only been beaten by one fighter Srisaket Sor Rungvisai. That’s a wrecking machine that the top guys at 115 haven’t been in a hurry to fight.

In another great fight on tonights Garcia-Vargas undercard, WBC flyweight champion Julio Cesar Martinez (15-1, 12 KOs) fights challenger Jay Harris (17-0, 9 KOs. What makes this fight so interesting is skills and size that Harris, 29, has going for him in facing the Eddy Reynoso-trained Martinez, who some boxing fans believe is a future star.

And last but not least, former WBO heavyweight champion Joseph Parker meets the knockout artist Shawndell Winters in a fight that he cannot afford to lose. Parker not only needs a win tonight over Winters, but he also must impress in a way that shows that he still rates to be mentioned among the elite in the division. 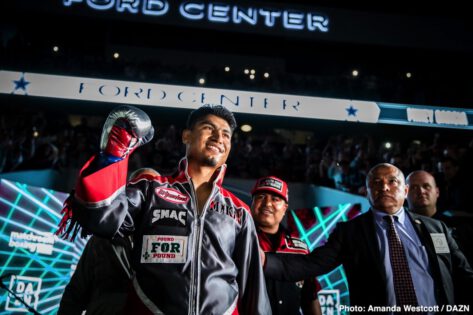 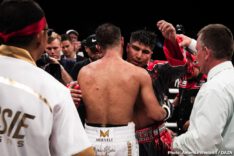 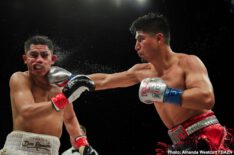 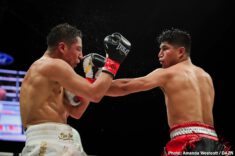 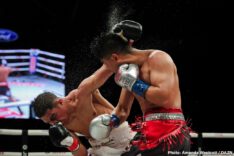 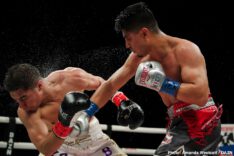 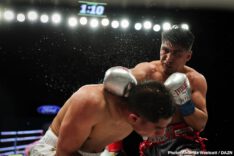 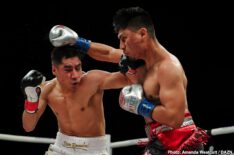 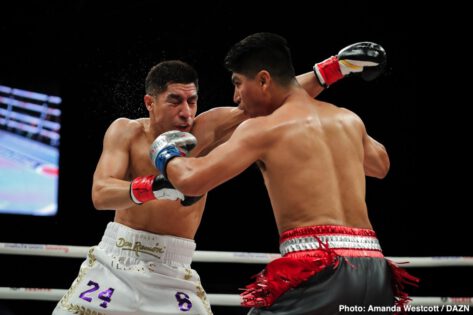 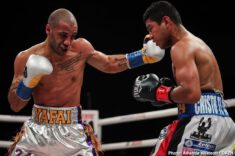 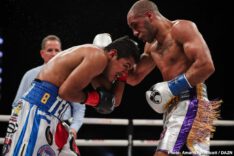 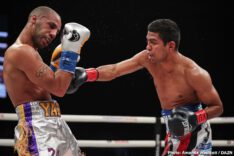 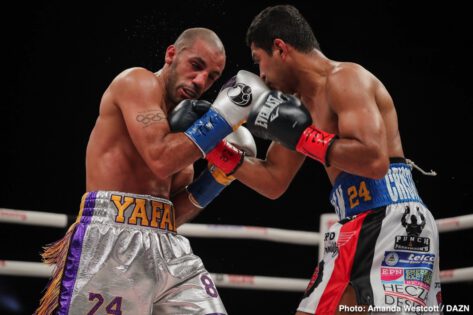 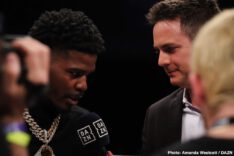 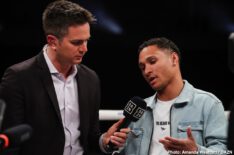 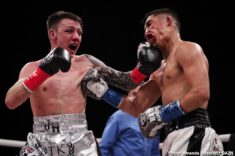 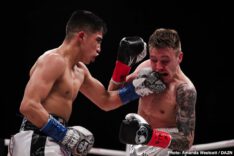 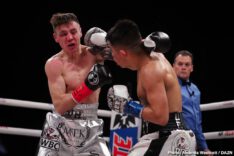 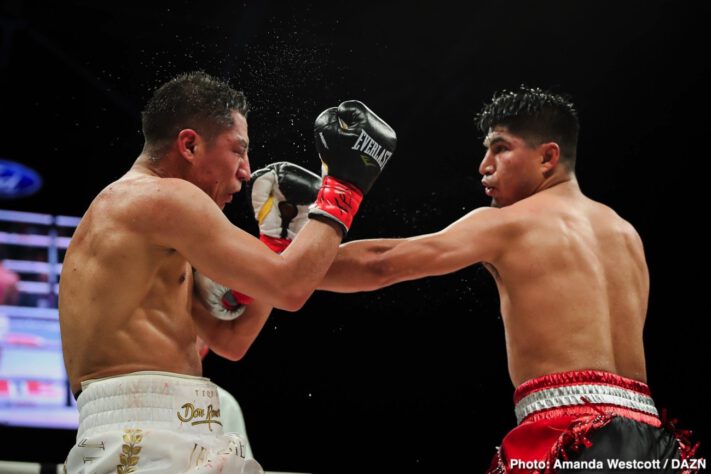