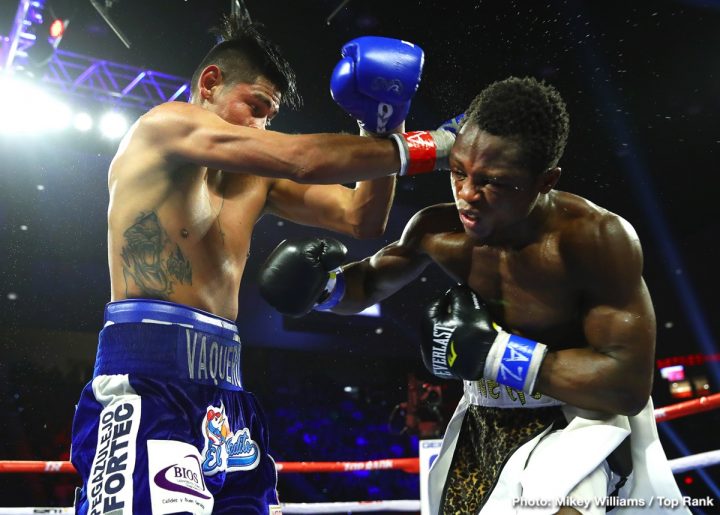 By Dan Ambrose: WBO super bantamweight champion Emanuel Navarrete (27-1, 23 KOs) defeated former WBO champion Isaac Dogboe (20-2, 14 KOs) by a 12th round knockout in their rematch on Saturday night at the Tucson Arena in Tucson, Arizona. Dogboe was trailing badly at the time of the stoppage in the 12th round by the scores 109-99, 109-99 and 109-98.

Dogboe connected on 121 of 523 shots, according to CompuBox. For his part, Navarrete landed 314 punches. Most of those shots were power shots. When a fighter out-lands his opponent almost three to one, that tells you something. Dogboe was completely out of his element tonight, and it’s a wonder how he lasted as long as he did in taking all the shots.

Dogboe’s trainer/father Paul Dogboe showed a lot of patience in keeping Isaac in there as long as he did before he threw in the towel in the 12th round. Dogboe had been knocked down in the sixth and 12th rounds, and he had been completely dominated by the 24-year-old Navarrete in the fight. That was a really bad beating that Dogboe took before the plug was pulled in the fight.

Just like in his 11th round TKO victory over Jessie Magdaleno in April of last year, Dogboe, 24, never stopped coming forward looking to land his hard power shots on Navarrete. There’s no question that Dogboe landed his fair share of heavy shots in the fight tonight. The problem was, Dogboe was hit so often by Navarrete that it was ultimately too much of a price for him to pay in the fight. Navarrete had beaten Dogboe by a 12 round unanimous decision on December 8 last year at Madison Square Garden in New York.

Dogboe stayed on his feet the entire time in losing by the scores 115-113, 116-112 and 116-112. What was different about the rematch tonight was the amount of punishment that Dogboe took. He had taken a lot of hard shots in the first fight, and there wasn’t any confidence booster type fights in between that one and tonight’s fight. It might have been better for Dogboe if he’d been able to put together four good wins over beatable opposition before he tangled with Navarrete a second time.

“It’s not over until the final bell. Hats off to Navarrete,” Dogboe said. “He did a great job. Making super bantamweight is getting too difficult. My next fight, I will be moving up to [featherweight]. I will be much more comfortable there.”

It’s hard to imagine the short 5’2″ Dogboe fighting at featherweight. That’s very short for that weight class. Dogboe’s height is short for even the super bantamweight division. He’s going to be giving away five inches in height to most of the top guys in the 122-pound weight class. If anything, Dogboe should be trying to go on a diet to move down to 118 to fight guys more his own size at bantamweight than going up to the 126-pound weight class and dealing with fighters that are going to have just as much of a size advantage over him as Navarrete did tonight.