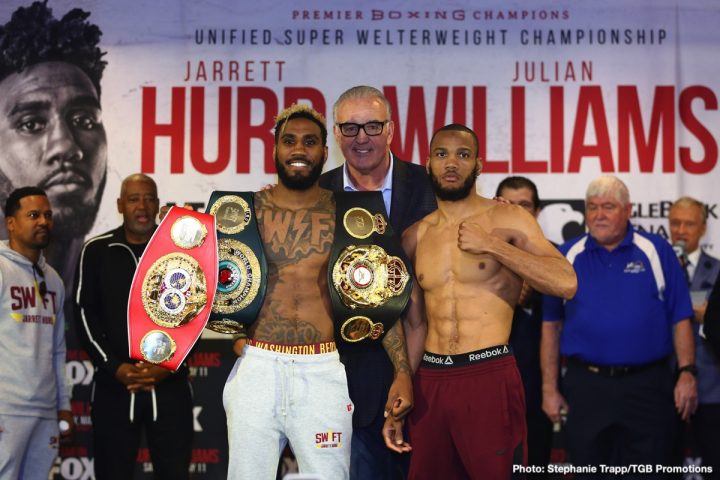 By Mark Eisner: Jarrett Hurd (23-0, 16 KOs) will be defending his IBF/WBA junior middleweight titles tonight against his #1 IBF ranked contender Julian ‘J-Rock’ Williams (26-1-1, 16 KOs) in what should be an interesting contrast of styles on Premier Boxing Champions on FOX and FOX Deportes at the EagleBank Arena in Fairfax, Virginia.

Jarrett Hurd will be looking to KO Julian Williams

Hurd, 27, is going to be taking his high powered offense and looking to score another impressive knockout over the hard hitting 29-year-old J-Rock Williams, who is coming into the fight with a four-match winning streak. Williams had a difficult time making weight on Friday, and it could be a problem tonight for him if he’s still draining from the ordeal of getting down to the 154 pound limit. Williams came in at 153 ¾ pounds, but he’s said to have really struggled getting the weight off. Both of these guys are long overdue to move up to 160 to campaign against fighters their own size, but it’s understandable why they’ve chosen to stay at 154 for as long as possible. With lions like Gennady Golovkin, Saul Canelo Alvarez, Jermall Charlo, Demetrius Andrade and Daniel Jacobs at middleweight, it’s easier for Williams and Hurd to stay at 154, and to win fights in this division.

Three years ago Hurd was practically invisible. He was just another one of the good contenders in the junior middleweight division, but not someone that was talked about by a lot of boxing fans. But since 2017, Hurd has come on like a meteor flashing across the sky in defeating Tony Harrison, Austin Trout, Erislandy Lara and Jason Welborn to capture the IBF and WBA 154-pound titles. Known for his late surge in his fights, Hurd has been wearing his opponents down with his slow, steady approach to battering them into submission. Hurd had his sights set on facing Jermell Charlo when he was still the WBC junior middleweight champion, but he was surprisingly beaten on December 22 by Harrison by a controversial 12 round unanimous decision.

J-Rock Williams, 5’10”, is three inches shorter than the 6’1″ Hurd, but he’s pretty solid at the weight. There’s not much between the two big junior middleweights when they rehydrate. Both of them are in the 170s after they’re fully rehydrated. The difference between the two is the height for Hurd, and his heavy hands. He’s a big puncher, and he likes to start slowly and pick up steam as his fights progress into the later rounds. Hurd has a good engine, and that’s what makes him tough to beat.

Hurd is now hoping to fight the winner of the June 23 rematch between Harrison and Charlo. Since winning his IBF title in February 2017 with a ninth round knockout win over Tony Harrison, Hurd has successfully defended the belt three times in beating Trout, Lara and Welborn in succession. Hurd stopped former WBA junior middleweight champion Trout in the 10th round in October 2017. After Hurd’s 12 round split decision win over Lara last year in April 2018, he had shoulder surgery on his right shoulder. Hurd tried to come back slowly in his fight against Jason Welborn last December, but the British fighter was unloading with everything he had trying to pull off an upset. This forced Hurd to open up with everything he had, and he was able to stop the Welborn in the fourth round. In hindsight, Hurd probably should have taken some more time off before he returned to the ring after his shoulder surgery. He came back quickly from the surgery, and would have done better to take his time in returning to the ring.

“The jab is always a key. It’s the most important punch in boxing and it’s the key for me no matter who I fight,” Williams said. “I always work with bigger guys in camp so the size is going to be nothing new. I just see a man over there. His crowd can’t fight for him. That’s all it’s going to be Saturday night.”

Hurd has become the talk of the division, making three defenses: a 10th-round stoppage of former titlist Austin Trout, a split decision over Erislandy Lara to unify two belts in the sensational 2018 fight of the year, and a fourth-round knockout of Jason Welborn in December in his first fight back from shoulder surgery following the victory against Lara.

This is a fight that will likely end before the sixth round. Hurd has too much power for Williams, and this should end early. Once Hurd starts sitting down on his shots, he’ll bang Williams out of there. I see it ending by no later than round six. If Williams comes out trying to slug with Hurd early, he could get knocked out within three rounds.

Undefeated light welterweight Mario “El Azteca” Barrios (23-0, 15 KOs) takes on the powerful Juan “The Pitbull” Jose Velasco (20-1, 12 KOs) in a 10 round fight. Barrios is highly ranked at #1 with the World Boxing Association at 140. He’s a good fighter with lots of power, and a massive amount of talent. Barrios, 23, has been looking good lately in defeating Eudy Bernardo, Jose Roman and Richard Zamora. Velasco is on the same level as those guys, but with punching power. Barrios is going to need to be ready to take some big shots in this fight if he wants to get the victory. Velasco was tagging Regis Prograis with some hard punches in their recent fight last year in July.

“He’s a hungry fighter. That’s the main thing. He’s tasted defeat and he doesn’t want to again. I’m blocking his path. On Saturday night, he’s not getting past me,” Barrios said about Veglasco.

Prograis ended up knocking Velasco down three times before halting him in the eighth round in an entertaining fight. Velasco has fought most of his career in his home country of Argentina against little known opposition, but he clearly has excellent punching power.

Barrios should get him Velasco out of there by the 10th round if he turns it out. Velasco is someone that Barrios will need to be careful with. He can’t get sloppy with a puncher like this.

2008 Olympian Matt Korobov (28-2, 14 KOs) faces Immanuwel Aleem (18-1-1, 11 KOs) in a 10 round fight. The 36-year-old Korobov is coming off of a disappointing 12 round unanimous decision to interim WBC middleweight champion Jermall Charlo on December 22 at the Barclays Center in Brooklyn, New York. It was one of the best performance of Korobov’s career despite the fact that he lost the match. He won over a lot of new boxing fans, many of which felt that he deserved the win.

“I took the fight against Jermall Charlo as a win because people know me better now and know where I stand in this division with my performance on short notice,” Korobov said.

The 25-year-old Aleem is a good fighter. He’s young, and only has one career defeat on his resume with his third round stoppage loss at the hands of Hugo Centeno Jr. in August 2017. Before that, Aleem had for the most part been great in beating the likes of Ievgen Khytrov.

Korobov has too much power, skills and overall experience for Aleem in this fight. Korobov should get Aleem out of there by the fifth round. If Korobov lets Aleem hand around into the later rounds, we could see an upset. Korobov’s stamina has never been good. That’s an area that Aleem could take advantage if if he’s still around by the eighth round.