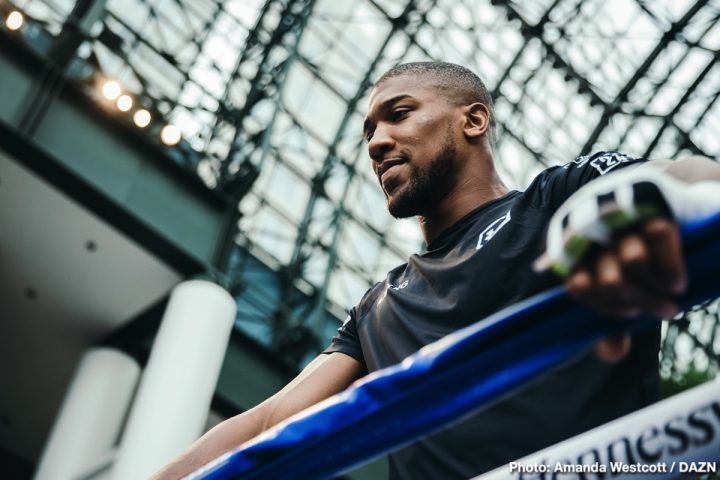 By Trevor McIntyre: Eddie Hearn has already selected three possible options for Anthony Joshua’s next fight and they are as follows: Kubrat Pulev, Oleksandr Usyk and Dillian Whyte. Hearn wanted WBC heavyweight champion Deontay Wilder as Joshua’s next opponent, but he’ll be facing Luis ‘King Kong’ Ortiz next in September on Showtime.

Pulev is viewed as the likely opponent for Joshua to fight later this year. It’s not a great fight, but it’s an upgrade for Joshua’s match against Andy Ruiz Jr. this weekend.

Speaking with IFL TV, Hearn said, “We have the IBF mandatory Kubrat Pulev. We have the WBO mandatory. It could be [Usyk]. We may even have a Dillian Whyte fight to jump into for November.”

Pulev and Usyk would be mandatory fights. Pulev already earned the International Boxing Federation mandatory spot with his 12 round unanimous decision victory against Hughie Fury last October. Usyk’ status as the WBO mandatory is still up in the air. The WBO needs to make a decision whether they’ll install Usyk as a mandatory for Joshua at heavyweight.

Joshua (22-0, 21 KOs) still needs to defeat voluntary challenger Andy Ruiz Jr. (32-1, 21 KOs) this Saturday night on DAZN at Madison Square Garden in New York. Hearn isn’t showing Ruiz Jr. much respect by already looking for Joshua’s next title defense. It’s a shame that Hearn is looking beyond the Ruiz Jr. fight already. It’s as if Hearn can’t wait for the Joshua-Ruiz Jr. fight to be done with already. That reflects more on Hearn though, as he’s the one that picked the 29-year-old Ruiz Jr. for Joshua to fight.

Two years ago, Pulev was scheduled to fight Joshua on October 28, 2017 at the Principality Stadium, in Cardiff, Wales. However, an arm injury wiped out the fight for Pulev, and he was forced to pull out of it. Pulev was replaced by Carlos Takam, who was stopped in the 10th round by Joshua. Pulev returned to the ring a years and a half later, and defeated Hughie Fury by a 12 round decision in an IBF eliminator to earn a second chance to fight AJ.

Usyk (16-0, 12 KOs) is by far the best option that Hearn mentioned of the three possible opponents, but he’s also the least likely. Usyk still hasn’t fought at heavyweight yet. He was supposed to face Carlos Takam on May 25 at Oxon Hill, Maryland. A bicep injury sidelined Usyk, forcing him to cancel the fight. Hearn is going to wait to put Usyk in with someone else later this year before matching him against Joshua. Usyk didn’t look so good in his last fight against Tony Bellew. Part of the reason for that was the seemingly lack of motivation for Usyk. Bellew was seen by a lot of boxing fans as a shot fighter, who was looking for one last payday. Usyk stayed in first gear in the first seven rounds before shifting into second to stop him in the eighth.

Whyte (25-1, 18 KOs) is the biggest puncher of the three possible opponents for Joshua. Hearn will need to convince Whyte to take the Joshua fight rather than continue down the path of trying to earn the WBC mandatory spot to face Wilder.


« Saunders reacts to GGG dismissing him as “not serious” option