Estrada wants Ancajas, Chocolatito or Rungvisai in next fight 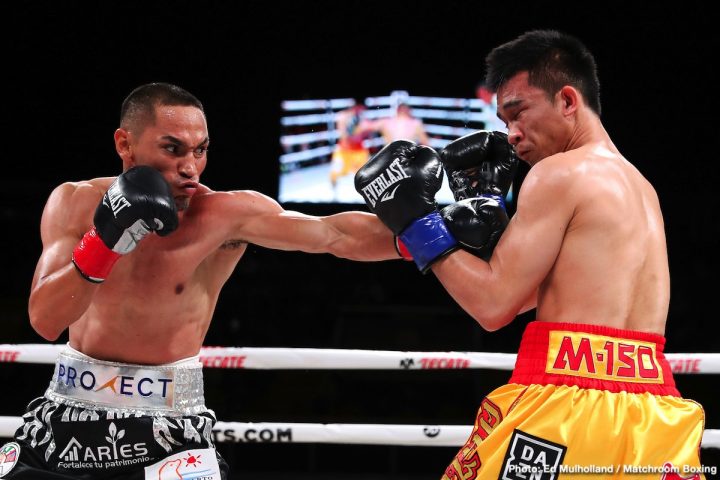 By Aragon Garcia: Juan Francisco Estrada (39-3, 26 KOs) wants a big fight in his first title defense of his WBC super flyweight title in August or September against IBF champion Jerwin Ancajas, Roman ‘Chocolatito’ Gonzalez or a trilogy match against former WBC champion Srisaket Sor Rungvisai (47-5-1, 41 KOs), who he just beat last month by a close 12 round unanimous decision in their rematch on April 26 at The Forum in Inglewood, California.

Here are the fighters Estrada wants for his August or September fight:

Estrada’s first choice is IBF 115-pound champion Ancajas (31-1-2, 21 KOs) in a unification fight. Ancajas has a lot of punching power, and exciting style of fighting. He’s been impressing ever since he captured the IBF super flyweight title with a 12 round unanimous decision win over McJoe Arroyo on September 3, 2016. Since that fight, Ancajas, 29, has successfully defended his IBF title seven times. Most recently, he stopped #1 IBF Ryuichi Funai (31-8, 22 KOs) in the seventh round on May 4 in Stockton, California. It could be a problem for Estrada getting a fight against the Top Rank promoted Ancajas, because he fights on ESPN. Estrada is now competing on DAZN. For a fight between Estrada and Ancajas to take place, it would either need to be shared on DAZN and ESPN or on one of the networks exclusively.

“I would like to unify with any champion. I want Jerwin Ancajas, the Filipino IBF champion, that is the fight I want, but if there is another champion why not?” Estrada said tp ESPN Deportes. ”The fight with Román González asks for it and Rungvisai, the third fight, why not? If what the team says, we will plan what follows before going up to bantamweight weight,” Estrada said.

Estrada lost to a prime version Roman Gonzalez (47-2, 39 KOs) by a 12 round unanimous decision in November 2012 in Los Angeles, California. Gonzalez, 31, has had a knee problem that has kept him out of action since his fifth round knockout of Moises Fuentes last September. Whether Gonzalez can have his knee in shape to fight in August or September against Estrada is open for question. Knees or tricky things. It’s not usually something that can be healed quickly if at all. Estrada was beaten soundly by Gonzalez when he was at his best. He’s clearly not at his best at this point in his career. Rungvisai twice beat Chocolatito, and he’s not looked like the same fighter he once was since making the move up to the super flyweight division in 2016 against Carlos Cuadras.

A trilogy fight against Rungvisai might be the most doable of the three names that Estrada mentioned wanting for his next match in August or September. A unification fight against Ancajas would be a great idea if not for the network issues that would come up for a fight between those two.

Estrada needs to move up in weight to bantamweight if he wants to find fame against the likes of Naoya Inoue, Nonito Donaire and Luis Nery. Those are great fights for Estrada. He would gain more fame beating those guys than he would in defeating Ancajas, Rungvisai again or the past his prime Chocolatito.


« Oleksandr Usyk to return in August