Oleksandr Usyk to return in August 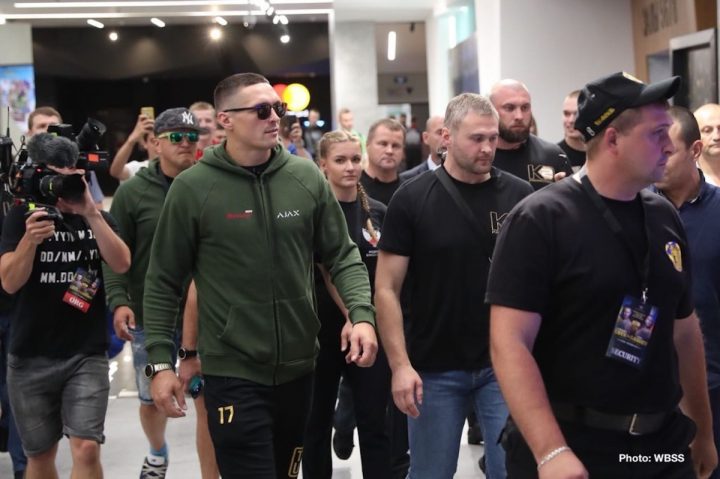 By Mike Smith: Oleksandr Usyk will be out of commission until August with a bicep injury he suffered while training for his now postponed May 25 fight against heavyweight Carlos Takam. Unified cruiserweight champion Usyk (16-0, 12 KOs) still has plans on fighting the 38-year-old Takam (36-5-1, 28 KOs) for what will be his heavyweight debut after his injured bicep heals up.

The two were supposed to face each other on DAZN at the MGM National Harbor in Oxon Hill, Maryland on May 25. The card is still going ahead, but it’ll now have lightweight contender Devin Haney facing Antonio Moran in the main event.

Usyk’s promoter Eddie Hearn of Matchroom Boxing expects him to need five weeks of rest before he can resume training to prepare for his heavyweight debut in August. The good news is the 32-year-old Usyk won’t need surgery on his injured bicep. However, he’ll still need to take it slow when he returns to training.

It’s believed that the sparring with bigger guys than Usyk is used to is what led to the injury. Moving up to heavyweight is a big step for Usyk, as he’s only 6’3”, and doesn’t possess a huge frame like the 240+ pound heavyweights in the division today. Although WBC heavyweight champion Deontay Wilder is about the same weight as Usyk at 214 pounds, he’s tall at 6’7”, and he has all that height to give him leverage on his punches.

Usyk doesn’t possess height and long arms like Wilder. It’s a different ballgame for Usyk. It’s not going to be an easy transition for the 2012 Olympic gold medalist from Ukraine. He’s starting late in his move up to heavyweight, and he doesn’t have the power to be able to stand and trade with the big heavyweights like cruiserweights from the past have had in moving up in weight like Evander Holyfield.

“He had a bicep injury. He is not having surgery. I think he will return to the ring in August, it will be five weeks until he can start training again,” Hearn said to wbcboxing.com.

Usyk is moving up in weight just as he was making a big name for himself at cruiserweight in winning the World Boxing Series tournament, unifying the division, and then defeating WBC emeritus champion Tony Bellew in 2018. It was a big year for Usyk. The cruiserweight division is perfect for Usyk in terms of his size and power. In moving up to heavyweight, Usyk is going to be at a distinct disadvantage, especially given that he wants to challenge IBF/WBA/WBO champion Anthony Joshua as soon as possible. Joshua, 6’6″, will have a big height, reach, weight and power advantage over Usyk. Those two could be facing each other in 2020. The World Boxing Organization is expected to install Usyk as their #1 contender shortly, and then order the fight. Dillian Whyte is currently the #1 contender with the WBO, but it’s likely that he’ll be pushed downward to #2 after Usyk fights for the first time at heavyweight in August.


« Breazeale: ‘I want to KO Wilder to impress the fans’

Estrada wants Ancajas, Chocolatito or Rungvisai in next fight »