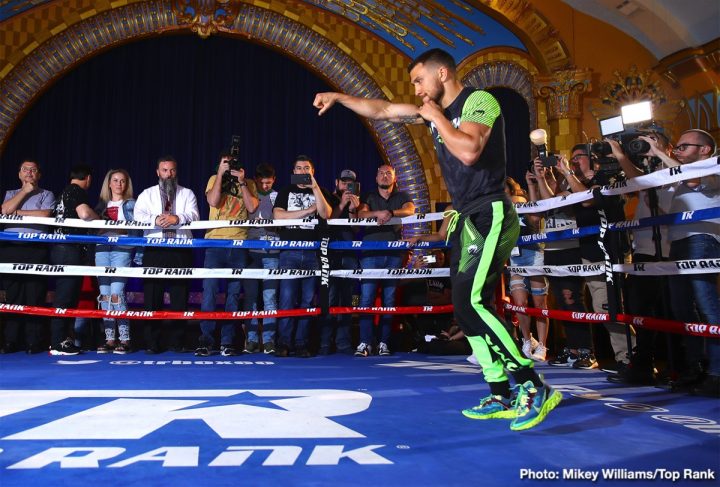 By Jeff Aranow: Gervonta “Tank” Davis can forget about fighting lightweight champion Vasiliy Lomachenko, because it is NOT going to happen, according to Top Rank promoter Bob Arum. He says WBA/WBA lightweight champion Lomachenko (12-1, 9 KOs) and WBA Super World featherweight champion Davis (21-0, 20 KOs) are in different weight classes, and he’s not going to attempt to talk to Gervonta’s adviser Al Haymon of Premier Boxing Champions to try and put the fight together.

It would be in Arum’s and Lomachenko’s best interest for them to take the fight with Gervonta if they can make it happen. There’s more interest right now in a Lomachenko vs. Davis fight than there is any other fight in the 130 and 135 pound weight classes at the moment. Mikey Garcia lost a little of popularity with his recent defeat at the hands of IBF welterweight champion Errol Spence Jr. on March 16. The other fighters at lightweight aren’t popular enough to make them good options for Lomachenko right now.

“Forget Gervonta Davis; he is in a different weight class,” Arum said to esnewsreporting in making it clear that he won’t be matching Lomachenko against the Mayweather Promotions fighter Tank Davis. “We’re not going over and talking to Haymon and getting tied up. We don’t need Gervonta Davis. If he comes to us and says we’ll fight lomachenko at x amount. Well, okay, we’d listen. But otherwise, I’m not chasing Gervonta Davis,” Arum said.

Lomachenko was willing to fight Guillermo Rigondeaux after the Cuban fighter moved up two weight classes from super bantamweight to fight him at super featherweight i 2017. For Arum to say that Lomachenko can’t move down one weight class to fight Gervonta at super featherweight, it sounds like he’s running interference for him to keep him from facing a potentially tough opponent that could maybe beat him.

Lomachenko is the one that said this week that he’ll move back down to super featherweight to fight Gervonta for free after he finishes up at lightweight. Arum saying that Lomachenko can’t fight Gervonta, because he fights in a weight class below him, suggests that he’s not on the same page as Loma. If Lomachenko wants the fight with Gervonta, he needs to convince Arum that he’s capable of taking it, and doesn’t need him giving excuses for why the match can’t be made and saying that he doesn’t want to take it.

The perception a lot of boxing fans have of Arum is he’s protecting Lomachenko, who they feel is a hype job, and not not as good as Mikey Garcia, Gervonta Davis or Teofimo Lopez. Arum saying that he wants nothing to do with trying to match Lomachenko against Tank Davis will strengthen the belief of the critics that he’s protecting the two time Olympic gold medalist from fighters that could beat him.

Hopefully, Arum isn’t ruling out him attempting to negotiate fights for Lomachenko with all Haymon fighters. If Arum takes that approach, he’ll stunt what’s left of Lomachenko’s career. He’s not old at 31, but his last two performances against Jose Pedraza and Jorge Linares showed that his time at the top is limited. In other words, boxing fans can’t count on seeing Lomachenko as an elite fighter for the next 10 years. He’ll get picked off soon by the younger fighters at lightweight, if he stays in this weight division longer, and at super featherweight.

Arum can keep Lomachenko winning with help from his match-makers, but whether that’ll lead to him becoming a crossover star is debatable. The careful match-making hasn’t worked with WBO welterweight champion Terence Crawford. After capturing world titles in three weight classes, with Top Rank’s guidance, Crawford still isn’t a star. Lomachenko needs to fight better opposition than Anthony Crolla, Jose Pedraza and Jorge Linares if he wants to become a PPV attraction. Arum closing off talk of putting a fight together between Lomachenko and Gervonta is a bad sign.

Whether Arum wants to admit it or not, Gervonta’s popularity is skyrocketing right now based on his quick knockouts that he keeps scoring over and over. Davis took care of Jose Pedraza like a speed bump in stopping him in the seventh round in 2016. It wasn’t a good look that Lomachenko was forced to go the full 12 rounds o beat Pedraza by a 12 round decision on December 8 at Madison Square Garden in New York. Lomachenko looked like he’d fallen off a bicycle with how marked up his face was by Pedraza. Gervonta took care of Pedraza in lightning fashion in stopping him in the seventh round.

Lomachenko is going to run out of opposition that the boxing public cares about if Arum is going to reject fighters like Gervonta. The fans aren’t exactly excited about Lomachenko’s fight against Crolla this Friday. They see it as a mismatch, and there’s not a lot of fans talking about that fight. Instead, the fans are talking about other fighters for Lomachenko, and treating his title defense against Crolla as if it’s already a victory. That’s obviously not a good thing. 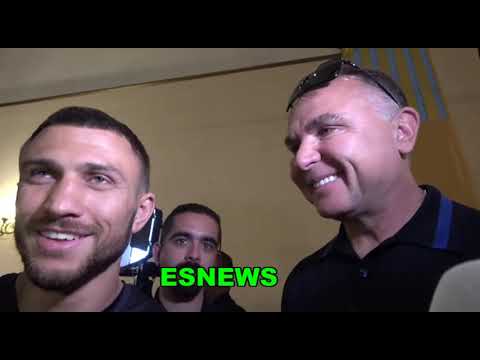 
« Maidana weight check, ahead of target date for June