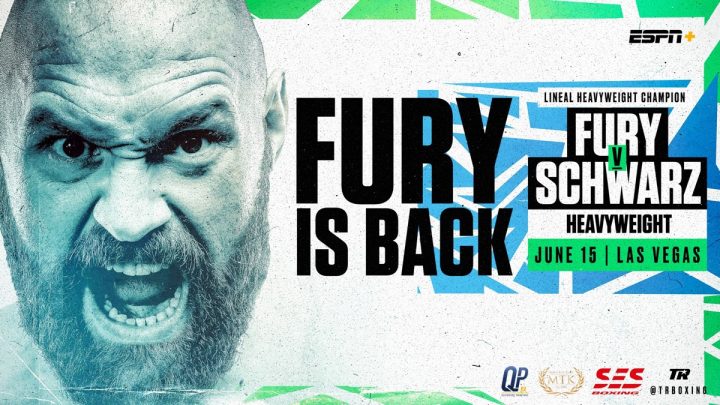 By Tim Royner: It’s being reported that lineal heavyweight champion Tyson Fury will be making his first fight with his new co-promoters at Top Rank Boxing against German heavyweight Tom Schwarz on June 15 on ESPN+ subscription app at a still to be determined venue, according to German boxing media.

The venue for the Fury vs. Schwarz fight is likely to take place at the Thomas & Mack Center in Las Vegas, Nevada. Top Rank has the venue on hold for June 15. It’s also possible that the fight could move to the MGM Grand or the Mandalay Bay Events Center in Las Vegas.

On paper, Fury-Schwarz is a terrible mismatch involving Fury fighting a guy that has been fighting domestic level opposition in Germany his entire six year pro career. If Matchroom Boxing promoter Eddie Hearn were to announce that IBF/WBA/WBO heavyweight champion Anthony Joshua was going to defend against the 6’5″ Schwarz, he would receive massive anger from the fans for setting up such a poor fight.

In an effort to try and get a more boxing fans to tune in to watch tonight’s heavyweight card headlined by Kubrat Pulev vs. Bogdan Dinu, Top Rank boss Bob Arum didn’t wanted boxing fans to watch the card to hear the news of who Fury will be fighting next. However, it’s an open secret that Fury’s next fight will be against the 24-year-old Schwarz, so fans weren’t going to subscribe to the ESPN+ app just to hear that Fury is facing the German fighter. It’s not a great fight that the fans want to see. The decision by Top Rank to match Fury against #2 WBO Schwarz is an unpopular one with the hardcore boxing fans that follow the British fighter, as they wanted to see him face WBC heavyweight champion Deontay Wilder in a rematch, not a fight against an unknown German fighter with an arguably inflated ranking with the WBO.

Fury’s decision to face Schwarz puts him in a bad light, as he had criticized Anthony Joshua’s choice of an opponent in Jarrell ‘Big Baby’ Miller for June 1. Schwarz, a fighter that struggled to beat Senad Gashi last June, makes Jarrell Miller look like a world beater in comparison. A lot of boxing fans see Fury as a sellout, who after being given a big promotional contract by Top Rank, willingly agreed not to face Wilder in a rematch, and instead fight the little known Schwarz.

Compared to Fury’s last fight against Wilder (40-0-1, 39 KOs) last December, this is a MAJOR step down in class in Fury facing Schwarz. Fury (27-0-1, 19 KOs) could be signed to fight a rematch with Wilder on May 18 if he’d pushed for it. Wilder and Fury were close to finalizing a deal for a rematch on May 18. Fury opted instead to sign a lucrative co-promotional deal with Top Rank Boxing, who decided they wanted to let the Wilder-Fury fight marinate for an undetermined amount of time. Initially, it was said the Wilder vs. Fury II fight would take place this year in November or December, but now there’s talk that it’ll take place in the first quarter of next year.

At this point, it’s too early to predict when the Wilder-Fury rematch will take place. Wilder wants the rematch with Fury in 2019, but he’s not the decider, even though he’s the WBC champion. It’ll be up to Fury’s two co-promoters Queensbury and Top Rank Boxing when they want to put the Wilder rematch together. Top Rank wants to put the Wilder vs. Fury rematch together, but they want to first let the fight marinate sufficiently before they do so.

Wilder and Fury battled to a 12 round controversial draw on December 1 on Showtime pay-per-view at the Staples Center in Los Angeles, California. The scores were 115-111 for Deontay, 114-112 for Fury and 113-113. Boxing News scored it for Wilder 115-111. Wilder appeared to win on the scorecards, but he also could have had a knockout in the 12th round when he knocked Fury senseless with a right-left combination. Fury looked to be unconscious until the count of five. The referee chose not to stop the fight even though Fury was motionless with both eyes closed on the canvas.

The World Boxing Council ordered a rematch between the two heavyweights to fight it out, but then Fury chose to sign with Top Rank, and they in turn came up with the idea to let the rematch build. It’s not surprising that Top Rank is making this move, since they previously promoted Manny Pacquiao. Under Top Rank’s helm, the Floyd Mayweather Jr. vs. Pacquiao fight marinated for six years before it was made in 2015. If Top Rank does the same move with the Wilder vs. Fury fight, the fans may have to wait for a long time before the two heavyweights face each other again. One big problem with Fury and Wilder fighting each other now is Wilder is with Premier Boxing Champions and works with Al Haymon, whereas Fury is with Top Rank and they have a deal to have their fighter’s perform on ESPN. So there’s now a network problem that makes the Wilder vs. Fury rematch a difficult one to work around.

Schwarz’s promoters have done a good job of getting him ranked #2 by the World Boxing Organization without putting him in against any noteworthy opposition. Just how they were able to get Schwarz ranked so highly by the WBO is unknown. If you look at Schwarz’s resume, it’s so poor that it would be a gift for him to be ranked even #15 by the WBO. The sanctioning body sees something in Schwarz that the fans and the other sanctioning bodies don’t see. Schwarz does have two things going for him in a fight with the 30-year-old Fury. Schwarz is younger than him at 24, and his record unblemished at 24-0.

Given that Fury fought well in his draw with Wilder last December, the boxing public expected a lot more from him than a fight against a lesser heavyweight like Schwarz.