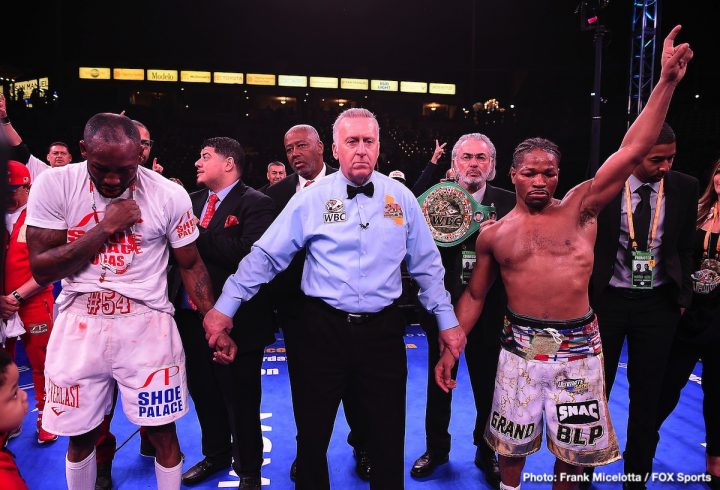 By Chris Williams: After winning a very controversial 12 round split decision win over the crafty Yordenis Ugas (23-4, 11 KOs) last Saturday, World Boxing Council welterweight champion Shawn Porter (30-2-1, 17 KOs) announced after the fight that he wants Manny Pacquiao, Keith Thurman or Errol Spence Jr. for his next fight. Porter said he’s not interested in defending his WBC title against Ugas, 32, in a rematch, because he feels it was a “decisive” victory.

Right now, you’d have to favor Thurman, Spence and Pacquiao by a wide margin if they fought Porter. It would be a mismatch. They might as well fight Ugas, who looked like he did enough to rate the win. Porter showed against Ugas, that he’s not quite at his level. Spence, Pacquiao and Thurman would do well against Ugas by going after him to knock him out. They wouldn’t come into the fight with Ugas with the same game plan that Porter used, and then stuck with it rigidly, without adapting by putting major pressure on him.

The boxing public would disagree with that, as many of them saw it as a robbery or a draw, but not a win for Porter. In light of Porter’s controversial win over Ugas, it puts the big three – Spence, Pacquiao and THurman – in the position where if they agree to fight him next, they’ll be fighting a guy followed by the taint of his questionable win over Yordenis. As such, there won’t be as much interest from boxing fans in seeing one of them fight Porter, because he’s now viewed as a guy that was gifted a decision over Ugas.

Porter defeated by the scores 116-112, 115-112 for Shawn, and 117-111 for Ugas. The fight took place on Premier Boxing Champions on FOX & FOX Deportes from the Dignity Health Sports Park in Carson, California.

“Errol Spence, Manny Pacquiao, Keith Thurman, no particular order,” Porter said when asked who he wants to fight next. “I’ll take all fantastic fights for me, and I look forward to any of those three next. Spence, he’s only had 24 fights. I didn’t realize that until today. Maybe experience factor right there. My goal is to win every fight until I retire,” Porter said.

Spence cares about unifying the welterweight division, so he’ll probably be interested in fighting Porter if he gets passed Mikey Garcia next Saturday. There isn’t a lot for Spence to choose from unfortunately. Terence Crawford fights for Top Rank Boxing, so he’s not a possibility. Keith Thurman wants no part of fighting Spence, so that guy is out of the equation. Spence already beat Kell Brook. There’s no point in fighting him again. Amir Khan will likely lose to Crawford when they face each other next month on April 20. There’s not much for Spence to fight other than Porter, who is looking old, weak and only half the fighter he used to be. It’s not a great fight for Spence unfortunately. He would be better off fighting Manny Pacquiao if he can get him. It would be nice to see Porter prove himself against someone else like Crawford or Josh Kelly. For Spence to face Porter next, he won’t get credit from the boxing public, because he’d be coming into the fight with the perception that he was gifted a title.

Porter, 31, says he’s going to attend next Saturday’s fight between IBF welterweight champion Errol ‘The Truth’ Spence Jr. (24-0, 21 KOs) and Mikey Garcia (39-0, 30 KOs), because he wants to possibly face the winner. Porter’s comment on Spence’s lack of experience as a pro suggests that he believes he can take advantage of that by beating him when/if they face each other. The guy that Porter has a great deal of respect for at welterweight is WBO champion Terence Crawford. In the same interview, Porter talked at length of how much admires the talent of Crawford, and how he sees him as a very good fighter, who he might like to face one of these days. The way Porter talked, it appeared that he views Crawford as the best welterweight in the division. As far as a fight between them goes, Porter’s chances might not be too good if he loses to the winner of the Spence vs. Garcia fight. The way that Porter fought against Ugas, he could get taken apart by Spence and out-boxed by Mikey. Porter was pretty beaten around his eyes, and that was with him boxing from the outside the entire fight. Porter acknowledges that he wouldn’t be able to use that same approach for a fight with Spence. With Spence’s long reach, and his ability to cut off the ring, he would close the distance and force Porter to exchange with him at close range whether he wanted to or not.

“I don’t want a rematch with Yordenis, because I’m looking at Errol Spence. I am looking at Manny Pacquiao. I am looking at Keith Thurman,” Porter said. “Obviously, if this fight didn’t go my way, those plans would have been spoiled, and I would have had to reset that lane, but we got the win,” Porter said in making it clear that he’s not going to try and clear up the controversy involving his questionable win over Ugas.

First and foremost, Porter needs to recover from his fight with Ugas. Although Porter stayed on the outside the entire fight by stubbornly sticking to a game plan that wasn’t working for him, he still ended up with a great deal of swelling around both eyes. That swelling it going to need to go down, and he’ll need to slowly recover from this encounter. Porter surprisingly said that he wasn’t hit very much. To look at Porter after the fight, you’d had to wonder what he was thinking. Perhaps he didn’t look in the mirror. If he had said that while wearing dark sunglasses that hid both eyes, then it would be more believable to the boxing fans. Porter was clearly hit a lot in the fight by Yordenis, and the damage from those shots was painfully clear from looking at how swelled up both of his eyes were.

“Personally, I thought we got it decisively,” Porter said in sounding like a fighter in denial about how poorly he’d fought. “Anybody disappointed that I didn’t throw 100 punches per round, disappointed because I didn’t go after Yordenis the way I went after Keith Thurman, Danny Garcia or Paulie Malignaggi, you’re sore about it. You can’t fight every fight the same. That’s what we did. We made some adjustments, and we stuck with our adjustments,” Porter said.

The way that Porter is talking about the fans being “sore” about him not fighting the correct fight, he comes across as bitter at them for seeing how badly he fought. That’s a wrong-headed way for Porter to be thinking. Instead of getting upset with his boxing fans for noting what a poor game plan he had, Porter should be looking at his trainer Kenny Porter, and telling him that his game plan was ineffective. If Porter’s trainer/dad can’t come up with better game plans in the future, he’s not going to last too much longer as a top fighter. In fact, Porter will almost surely lose his WBC title if he does get a fight against Spence, Thurman or Pacquiao next. Porter’s inability to make adjustments, and his lack of power and size will be his undoing against a fighter like Spence. Right now that fight looks like a mismatch in favor of Spence. Porter used to be a good fighter, but he’s lost something from his game. He was exposed by Ugas, and it’ll only get worse when he fights Spence.

Porter sounded like he was proud that he stuck with his original game plan for the Ugas fight, and that he hadn’t made adjustments by changing things up when started to get dominated. Porter thinks he was better off by not applying pressure on Ugas, and that he did well by staying on the outside where he was getting the worst of it due to the long reach of the Cuban fighter.

“I don’t think I need to do anything to convince anybody I won the fight,” said Porter in sounding defiant. “I don’t think that was a champion decision, because I’m a bigger name. I think this was a fair shake. If you feel letdown, then just wait for the next one. I went out there and I did what I had to do. Me not making weight the first time was not a reflection of how I measured out against Ugas. I think I won the fight hands down,” Porter said.