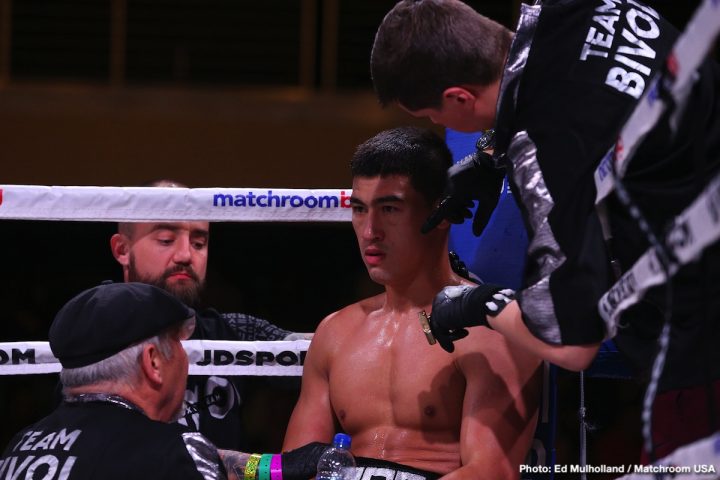 By Scott Gilfoid: Following his one-sided 12 round schooling of challenger Joe Smith Jr. (24-2, 20 KOs) last Saturday night, WBA light heavyweight champion Dmitry Bivol (16-0, 11 KOs) will likely be defending his title next against unbeaten interim WBC 175 lb champion Marcos Browne (23-0, 16 KOs) this August, according to Matchroom Boxing USA promoter Eddie Hearn. He says the WBA will be ordering the Bivol vs. Browne fight this week as the mandatory defense that Dmitry needs to make for his title.

Bivol, 28, easily beat challenger Smith Jr. last Saturday night by a wide 12 round unanimous decision on DAZN at the Turning Stone Resort & Casino, in Verona, New York. The fight had a brief moment of drama in the 10th round when the 29-year-old Smith Jr. clipped Bivol with a right hand to the head as the bell was sounding to end the round. Bivol took the shot to the side of his head. He then staggered back to his corner. That was the only round where Smith Jr. gave Bivol problems. In the 12th, Smith Jr. was close to being knocked out as Bivol flurried in the last 10 seconds of the round.

“So with Dmitry, Marcus Browne is the mandatory next, which I think is a great fight, which he expects to make in August,” Hearn said about the World Boxing Association planning on ordering the Bivol vs. Marcus Browne fight next week. “It’s a very good, tough fight. He’s [Bivol] had 16 fights. You’ve got other champions. Beterbiev, once I told him we were signing Dmitry, he went to Top Rank. I don’t think it was his intention, but he did know about it before he left, and that’s a fight that I would love to make. We’ll see how that plays out . But I think the focus will be the WBA mandatory, which is a very good fight, and a good fight for Dmitry based on his [Browne] win over Badou Jack. the WBA has already said they’re going to call it. So when they call it, we expect it to happen next. I do think that’s an excellent fight to be made,” Hearn said.

Marcus Browne, 28, would be a good challenge for Bivol, because not only can the 2012 U.S Olympian punch, but he’s also got excellent hand speed. The lack of speed is hat was Joe Smith’s undoing last night. He had the power to hurt Bivol when he eventually caught him with a big shot in the 10th round, but what he lacked in a big way was the hand speed. Bivol’s chin might not be sturdy enough for him to take the big shots that Browne will catch him with. This isn’t going to be the same one-sided fight that we saw last Saturday between the painfully slow Smith Jr. against a faster Bivol. Browne, 6’1 1/2″, is taller than the 6’0″ Bivol, with a longer reach, and he fights out of the southpaw stance. This is potentially a huge nightmare opponent for Bivol.

A lot of boxing fans would rate Browne as a better puncher than Bivol, and more willing to take risks. Bivol’s safety first style of fighting could get him in trouble against Browne, who is braver and more willing to take chances to win the fight. We could see the Bivol hype train end against Browne. Bivol’s promoter Eddie Hearn might end up crying crocodile tears if that happens, because he feels he’s going to become the next big star in the 175 lb weight class. Browne can do everything that Bivol can do, but he’s the advantage with speed, athleticism and most importantly, courage.

Browne is afraid of no one, and he doesn’t hold back in his fights, unlike Bivol, who fights like he’s walking on eye shells, even against non punchers like Isaac Chilemba. Bivol just doesn’t want to take chances by opening up with his shots for some reason. If Bivol fights like that against Browne, he’s going to get hammered into oblivion. If Browne hurts Bivol, it likely won’t be at the end of a round like we saw with Smith Jr. hurting him last Saturday. Browne will hurt him at the beginning for the middle part of the round, and he’ll have plenty of time to finish him off.

“You’ve got the prospects of Canelo maybe if he comes back to 168. We don’t know,” Bivol’s promoter Eddie Hearn of Matchroom Boxing USA said of talking of the potential for a fight between Saul Canelo Alvarez and Bivol at super middleweight if the Mexican star moves back up to super middleweight to defend his WBA ‘regular’ title in that weight class. “Callum Smith is the WBA champion, and a Ring Magazine champion. He’ll be fighting on the [Oleksandr] Usyk card. So we’ll be looking for another big fight in America towards the end of the year,” Hearn said.

Bivol stated that he would gladly move down to 168 for a big fight against one of the champions in the weight class. British promoter Eddie Hearn didn’t sound too optimistic about Saul Canelo Alvarez moving back up to super middleweight to defend his WBA ‘regular’ title against Bivol, who would be moving down in weight. Hearn knows that Canelo will probably stay at middleweight for the remainder of 2019 for his fights with IBF champion Daniel Jacobs on May 4, and then potentially former unified 160 lb champion Gennady Golovkin in September. If Canelo wins both of those fights, there’s an outside chance he would return to the ring in December to fight at super middleweight in defense of his WBA ‘regular’ title.

“I didn’t see the fight against Badou Jack, but if my fight will be against Browne, I’ll be glad, because he’s very good,” Bivol said about Marcus Browne. “He has a good name in boxing. He has two belts. I will be glad to fight him. I want to fight against everyone that has a belt. I feel like this is my time. I have 28 years. When? I want it now. I’m ready for a big fight. I’m glad because I didn’t get a lot of punches. I gave him a lot of punches. I want to know how you rate my performance? Maybe he’s the hardest puncher. He has a strong right and left hand, but he hasn’t enough speed,” Bivol said about Smith Jr. “If you have a good punch you don’t have enough speed. He has a good punch. If there was an opportunity to make one of those fights [unification matches against Artur Beterbiev, Oleksandr Gvozdyk or Sergey Kovalev], I’d do it next,” Bivol said.

Bivol should be careful for what he wishes for. Thinking it’ going to be just fine and dandy when he fights Marcus Browne might be an illusion for Bivol. Once Bivol gets inside the ring with Browne, and finds out for himself how fast, powerful and talented he is, he might wished he had moved down to 168 rather than waking up a sleeping giant like Marcus. Browne has almost every advantage under the sun against Bivol to go along with his southpaw stance. Personally, the courage that Browne has will be the most important thing that he’ll have going for him against Bivol. It doesn’t matter how much talent a fighter has. If he doesn’t have the courage to let his hands go, then all that talent is for waste. Hearn might want to sit down and have a long talk with Bivol to try and coax him to give up his WBA light heavyweight title, and move down to 168 when he has less threats, and a bigger potential for him to reign for many years.

Bivol deciding not to move down to super middleweight is clearly a strategic move. While there’s the incredibly small chance of Bivol getting a fight with Canelo if he moves down to 168, most likely the only interesting fight he would have at super middleweight would be against WBA 168 lb champion Callum Smith. That’s a good fight for Bivol, but it wouldn’t be a huge one Smith isn’t well known. It’s a fight that would mainly resonate in the UK, but not so much in the United States where the casual boxing fans have never heard of Callum. If Canelo were willing to fight Bivol at super middleweight, then it would be worth it for him to go back down to that weight class, but he probably won’t. There’s more big name fighters at 175 than there is at 168. However, the well known fighters at light heavyweight are almost all signed with Top Rank, with the exception of Browne and Bivol. If Hearn can setup fights between Bivol and the Top Rank fighters, Beterbiev, Gvozdyk and Kovalev, then it would be worthwhile for him to stay at 175. If not, then Bivol will be no better off staying at light heavyweight than he would if he moved down to 168. In looking at how weak and small Bivol looked against Smith Jr. last Saturday night, he would be much better off moving down to super middleweight and staying there. Bivol doesn’t possess the size to fight at 175, and it’s only a matter of time before one of the big punchers in the division knocks him out. At 168, Bivol won’t need to worry so much about being out-sized, and overpowered by the hard throwers in that division like he would if he stay at light heavyweight.

“When I got hurt, I heard the bell and I relaxed a little bit. I got his punch,” Bivol said in talking about how he was hurt in the 10th round by Smith at the end of the round.

Nah, it looked more like a case of Smith Jr. clocking Bivol without the Russian fighter knowing that the round was about to end. Smith’s punch was released before the bell, not after.

“I have no problems with Dmitry boxing on ESPN,” promoter Hearn said about Bivol fighting on ESPN against Top Rank fighters Beterbiev, Gvozdyk or Kovalev. “If it means an opportunity for him, I’m not going to hold him back, ‘You can’t do that.’ If it’s the right deal, I want to see him in a big fight. If he’s on another network, no problem,” Hearn said.

Well, if Hearn wants Bivol to fight the other light heavyweight champions Sergey Kovalev, Oleksander Gvozdyk or Artur Beterbiev, it’s definitely going to need to take place on ESPN, because those fighters are probably not to be given the green light to fight Bivol on DAZN. 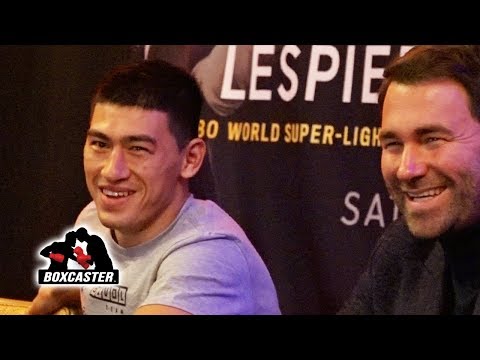