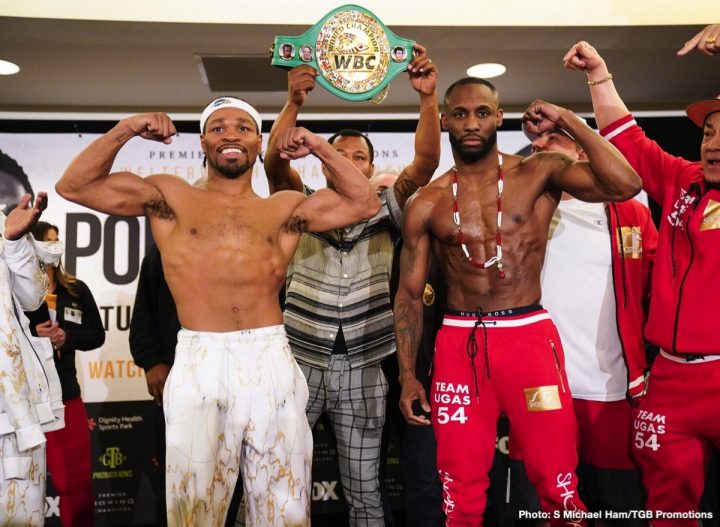 By Mike Smith: Shawn Porter (29-2-1, 17 KOs) had a brief scare last Friday when he came into the weigh-in at 148.8 pounds on his first weigh-in attempt for his title defense of his WBC welterweight belt against Yordenis Ugas (23-3, 11 KOs). Porter later had his hair cut, and stripped nude to make weight at 146.8 lbs.

This is not the big fight that Porter wanted. He wanted to face Keith Thurman, Danny Garcia or Errol Spence Jr. Ugas isn’t in the same league as any of those fighters. It’s possible that Porter overlooked Ugas, and didn’t put in the hard work that he needed for this fight to make weight. As such, we could see an upset tonight.

Porter having to lose a lot of weight in the dressing room sends warning signals that he might be over his head tonight against the highly technical Cuban talent Ugas. This is a fight that would be tough for Porter even if he were at best, but he’s not likely to be 100% given how much weight he had to take off at the last minute for this fight. Porter did not look good despite his assertions that he was fine, and in tip top shape. Porter had the look of a weight drained fighter, who could be ripe for the picking for the much taller 5’9″ Ugas.

Porter, 31, acknowledged after the weigh-in that he didn’t take care business in getting his weight right for him to be ready for the weigh-in. Nevertheless, Porter maintains that he’s rock solid, and will be ready to defend his World Boxing Council 147 lb title tonight against the 32-year-old Ugas.

Porter vs. Ugas will be televised in the main event tonight on Premier Boxing Champions on FOX & FOX Deportes from the Dignity Health Sports Park, in Carson, California. The fight card kicks off at 8:00 p.m. ET/5:00 p.m. PT.

“This wasn’t me underestimating Ugas. It was nothing except me not taking care of business the way it should have been taken care of,” Porter said about him missing weight in coming in at 1.8 lbs over the 147 lb welterweight limit at 148.8 lbs in his first attempt at the scales. “It’s done, it’s over. I’m solid as a rock. I feel great. I’m ready to fight,” Porter said.

Porter reportedly had to hit the treadmill pretty hard to lose the remaining 1.8 lbs to get down to the 147 lb limit. This could be a sign that it’s time for Porter to move up in weight to 154. When a fighter can’t make weight without draining himself, as Porter clearly did to make weight, it’s time for them to move up. Porter did everything he could to get down to 147 lb limit, but it seems obvious that his days at in this weight class are numbered now that he’s in his 30s. If Porter loses tonight, which is very possible given his last minute struggles to make weight, he might need to move up to junior middleweight.

At 5’7″, Porter is carrying around too much muscle for him to fight at 147. He wasn’t overweight because he was carrying around excess fat. That was too much muscle on Porter’s frame that had him coming in over the limit. Some boxing fans see Porter as a career weight bully. If his days of draining down to 147 to fight smaller guys than him has has finally caught up to him, then he could lose tonight if he lacks the strength to do the job against Ugas. This is a fighter that you don’t want to be weight drained for because he’s such a great technician. Porter can only push his body so far before it gives out on him. Tonight might be the night. Porter was never cut out for the welterweight division to begin with, and now it could be that he can no longer make the weight without taking drastic steps of draining himself at the last moment with his weight-cutting measures. Shawn and his trainer/father Kenny Porter will likely try and make weight for the 147 lb division as long as possible, because once he moves up in weight to 154, it’s going to be tough on him against the lions in that weight class. Without Porter’s weight advantage over his opposition, his career could take a nosedive in the junior middleweight division. For that reason, you can expect Porter to go to any lengths necessary for him to continue to make weight at 147. There are a lot of unknowns waiting for Porter at 154, and he’s clearly better off at 147, as long as he can compete in the division without being weight drained.

It’s going to be interesting to see how much weight Porter puts on by the time he enters the ring tonight. It wouldn’t be surprising if Porter is around 170 lbs by the time he gets inside the ring. That would be a 23 lb weight gain. That’s a massive amount of weight to gain back, but it wouldn’t be surprising at all if that’s the case. In the amateur ranks, Porter fought Oleksander Usyk. That kind of tells you about how big Porter was when he was an amateur. He’s been draining down for years to fight at 147. It’s all possible because weigh-ins are held the day before the fights instead of on the day of the fight like they used to be in the old days.

“I’m sure Ugas has looked at what I do in the ring and sees how tough and rough it is to fight me,” Porter said. “He thinks he’s the better boxer and has more technical skills, which is fine with me. He can say what he wants, but the talking is done after today.”

The undercard is stacked with these excellent fights:

– Viktor Slavinskyi vs. Luis May