By Allan Fox: Shawn Porter is second-guessing how he fought a day after his tenth round TKO loss to WBO welterweight champion Terence ‘Bud’ Crawford last Saturday night at the Mandalay Bay Resort & Casino in Las Vegas.

Porter (31-4-1, 17 KOs) feels that he lost his composure after being knocked down the first time in round ten, and instead of fighting smart, he tried to retaliate to show Porter, fans, and the judges that he wasn’t hurt.

What made things worse for Porter was his trainer Kenny Porter; he wasn’t happy with how he’d looked during training camp. Kenny felt that Shawn wasn’t adequately prepared the way he needed to be, so once he was hurt in the tenth, he wouldn’t take chances by leaving him out there against a killer like Crawford.

If Porter had a good camp, Kenny would have been comfortable with leaving him out there to try and come back after being knocked down twice by Crawford.

Porter: “I lost my composure”

“He hit me clean a ton, and I didn’t keep my hands up, but at that moment when that first knockdown happened, I lost my composure,” said Shawn Porter to Fighthype a day after his 10th round TKO loss to Terence Crawford.

“Even though you couldn’t see it on the outside, everything is internal with boxing.

“Even though you guys didn’t see it, I thinking about it on the inside of my mind, ‘I’m getting hit,’ and I went down off an uppercut. The first time that I went down, I was like, ‘You’re good.’ I got up with no problems.

“I actually was not as hurt as I was against Errol Spence Jr. I looked over at my corner and let my dad know that I was okay, but I lost my composure, and it was because I got hit clean more than I’m used to,” said Porter.

It’s not entirely surprising that the 34-year-old Porter lost his composure in the 10th round because he’s an ultra-aggressive fighter who had the wrong temperament to survive once he was hurt.

If Porter had gotten hurt against a less talented fighter than Crawford, he might have made it out of the round.

But with Crawford’s sharpshooting, high accuracy, and seek & destroy attitude, Porter was a goner after the first knockdown.

“I told my wife, ‘When you get put down, the judges see you get hit clean.’ I said, ‘There was a moment where I should have retreated.’ I said, ‘But when I retreat, I lost that round.’ Now you say, ‘You got knocked down, so you already lose that round.’

“But what energy am I giving my opponent? If I retreat, it gives them more energy to keep coming at me. It gives him energy where he forgets about fatigue, he forgets about the punches he threw and all that kind of stuff.

“The only thing he’s focused on is getting me out of there. I didn’t want to give that to Terence. Then on the other side is the judges as well. If you give them any indications that you’re any more hurt than you, guess what?

“So, I told my wife that I kept going because I didn’t want to give Crawford anymore momentum than he already had, and I didn’t want the judges to have anything else to hold onto leading to the 11th and 12th rounds.

“I go at Terence, but then I lost my composure. It was like, ‘You’re getting hit. Keep your hands up, use your defense, and move,’ and it was like that at that movement. That’s what happens at the elite level. There are moments,” Porter said.

At that point in the fight in the tenth, it was not likely that Porter would have won the 11th or 12th rounds. So if Porter had resisted his motion of wanting to fight back when hurt, he was so tired by that point that it wasn’t realistic to assume that he would come back to win the 11th and 12th.

Porter looked severely gassed in the ninth, and he was just as exhausted in the tenth. There would be no coming back after the tenth to win the final two rounds, not with the way Porter looked.

He had pressed too hurt in rounds one through eight, emptying his gas tank in a way that made it impossible for him to get his second wind.

Porter felt he had to fight back

“I felt like I had to hit him back, and once I got hit some more, I was talking to myself some more,” said Porter in talking about what went through his mind when he was hurt in the tenth round.

“That’s when you see me slamming my fist on the ground because I’m like, ‘You know what you’re doing,’ and I was so mad. My dad said, ‘Hey, I knew this might happen in this fight. I knew this might be coming.’

“My dad stepped up on the apron, and I wasn’t expecting that. That was the first time we had to deal with that. We’ve had conversations actually on the podcast, and I just said, ‘Yeah, my dad knows what to do.

“I can’t argue with my dad. Shawn Porter isn’t the type of fighter that takes six or seven shots clean in a row the way that I did against Terence Crawford.

“My dad knows who’s across the ring. Terence isn’t going to stop, Terence is a sharpshooter, and he is who he is, man. One of the best to do it,” said Porter.

Ultimately, Porter’s fierce Bulldog tenacity worked against him in the tenth round when he was dropped the first time.

Had Porter not been so hung up on not wanting to show weakness to Crawford, judges, and fans, he would have done what his trainer Kenny Porter had taught him to do when hurt, and that’s either hold or move away.

In this case, Porter went right at Crawford and wound up getting dropped a second time.

In hindsight, it might not have changed the outcome if Porter had fought smartly by holding or moving after he was hurt, but it would have at least given him a better chance. 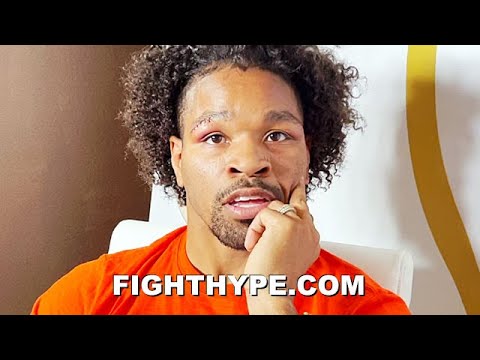 Announced: Dmitry Bivol vs. Umar Salamov on Dec.11th in Russia »