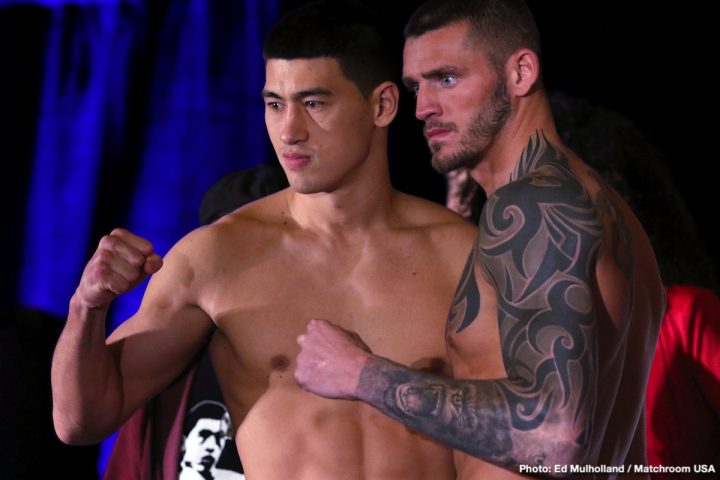 By Jim Dower: Dmitry Bivol (15-0, 11 KOs) will be looking to shine tonight in his defense of his WBA light heavyweight belt against the upset-minded Joe Smith Jr. (24-0, 20 KOs) on DAZN at the Turning Stone Resort & Casino, in Verona, New York, USA.

Bivol, 28, doesn’t possess the same kind of punching power that Smith Jr. has going for him, but he makes up for it with his keen accuracy, high punch output, and his ability to stay out of harm’s way when needed. One thing that Smith Jr. has going for him is no one is expecting anything from him. The 29-year-old Smith Jr. has been brought in as the opponent, and he’s a big underdog. The one with the pressure on him tonight is Bivol, who is seen as the next big star in the 175 lb weight division. Bivol has a lot of people excited about his potential, and they can’t wait to see him face the better fighters in the 175 lb weight division like Marcus Browne, Sergey Kovalev, Oleksander Gvozdyk and Artur Beterbiev. Those fighters are all with different promoters, and they fight on separate networks than Bivol. If any of those fights do take place, it might take a miracle.

Bivol wants Saul Canelo Alvarez, and he’s hoping that his promoter Eddie Hearn can set that up in the near future if he keeps winning. Canelo says he wants to challenge himself by taking on the best. Bivol respects that quality from Canelo, but it remains to be seen whether the fight will ever take place between them. Bivol’s ability to drop down in weight makes it possible for him to fight guys in the 168 lb weight class. It’s likely that Bivol will have to be satisfied fighting other super middleweights instead of Canelo, who is attempting to unify the middleweight division right now. If a fight between Canelo and Bivol takes in the future, it will only happen after the Russian fighter becomes a star at the same level as Gennady Golovkin is at. To achieve that kind of popularity, Bivol needs to fight more often, and he needs to focus on scoring more knockouts. He needs to sit down on his shots a little more, and not be content with winning by a decision. Bivol was disappointing in his last contest in having to go the full 12 round distance to defeat 36-year-old former WBC 175 lb champion Jean Pascal by a 12 round unanimous decision last November. Pascal looked good at Bivol’s expense during stretches in that fight. Bivol got the win, but he didn’t impress at all.

There’s pressure on Bivol tonight to do the job on Smith Jr., and make it look easy. Bivol is going to be looking to take the fight to Smith Jr. in order to impress the boxing fans and the media. It won’t be enough for Bivol to stay on the outside all night, boxing Smith Jr. and making him look bad. Bivol has to take the fight to him and get him out of there.

Smith Jr. is easily the biggest puncher Bivol will have fought to date. Smith Jr. could change things rapidly tonight if he’s able to land one of his big power shots. The Long Island fighter’s power makes him a threat to beating Bivol. Smith Jr. says he watches his replays of his knockout win over Bernard Hopkins Jr. to motivate him to win his fights.

Bivol has done sparring with former WBC super middleweight champion David Benavidez, who is one of the biggest punchers in the 168 lb division, and that should help him be ready for Smith’s power tonight. Benavidez’s punching power is similar to Smith Jr’s power, but he’s not as explosive as him. Bivol knows what he’s getting himself into tonight in fighting Smith Jr., so he shouldn’t be surprised when he starts getting hit by his big power shots.

After tonight, there might be more interest from the super middleweight and light heavyweight champions to fight Bivol. It will depend largely on how well Bivol looks, and how much buzz is created from the win.

There are arguably better fighters than Smith Jr. that Bivol could have fought. These are fighters that Bivol should be facing right now to increase his star power: Marcus Browne, Sullivan Barrera, Felix Valera, Sven Fornling and Joshua Buatsi. Bivol has already beaten Valera and Barrera, making it pointless for him to face either of those guys again. Buatsi (9-0, 7 KOs) lacks the experience at the pro level to be thrown into the ring with Bivol right now. He’s not ready to fight him yet, but in the future a fight between the two of them is a distinct possibility.

“I know Callum Smith has a belt, and I would like to fight him if he wants to, and if our promoters can make this fight. I am open for every fight for the belt now. There are many names who have belts. To the top ten from Light-Heavyweight and Super-Middleweight: I’m ready to fight,” Bivol said.

A fight against Callum Smith is a definite possibility for Bivol, but don’t expect it to happen soon. Matchroom Boxing USA/DAZN promoter Eddie Hearn is trying to turn Smith, 28, into a star, and he’s not going to want to mess that up by letting him fight a talented guy like Bivol. Smith won the World Boxing Super Series super middleweight tournament last year in beating George Groves by a 7th round knockout. Smith won over a lot of fans in the UK by winning the tournament. If Hearn let’s Smith fight Bivol, he’ll likely lose to the Russian, and his fans will likely jump ship.

Smith Jr. is a good fighter with wins over Bernard Hopkins and Andrzej Fonfara. He showed in those two fights that he can jump on a guy, and blast them out when he sees an opportunity. It’s going to be a more difficult task for Smith to try and do the same thing against a quality operator like Bivol. Hopkins was a half century old when Smith Jr. fought him, and Fonfara was little more than a pure slugger with no defensive skills to speak of. Smith Jr. caught Fonfara with a big shot while he was in the middle of throwing a punch, and he was badly hurt. Smith Jr. then finished Fonfara. Had the two fought each other a second time. it might have ended with Fonfara winning.

Smith’s chances of winning this fight are not too good. Bivol’s strong punch resistance will take away Smith’s ability to knock him out with anything big. Without the ability to knockout Bivol, Smith Jr. will be stuck having to deal with the Russian fighter’s high punch output, and that’s going to make it a one-sided fight. Smith might end up getting knocked out tonight if he doesn’t do a better job of defending himself than he did in his loss to Sullivan Barrera in 2017. This writer sees Bivol winning by a lopsided 12 round unanimous decision over Smith Jr. It’ll be a competitive match, but Bivol’s superior talent will shine through, and he’ll ultimately be too talented for him.

On the undercard, WBO light heavyweight champion Maurice Hooker (25-0-3, 17 KOs) will be battling it out against undefeated Mikkel LesPierre (21-0-1, 10 KOs) in a fight that should be exciting from start to finish. LesPierre, 34, has never tasted defeat before, and he’s going to be going all out to try and pull off an upset in this fight. Hooker is coming off an impressive seventh round knockout win over Alex Saucedo Jr. on November 16 in Oklahoma City, Oklahoma. Hooker beat the highly hyped Saucedo Jr. in his own hometown in pulling off a big upset. In his fight before that Hooker, defeated former WBO 135 lb champion Terry Flanagan by a 12 round split decision to win the vacant WBO light welterweight title last June.

Light heavyweight Callum Johnson (17-1, 12 KOs) will fighting a tough opponent in Sean Monaghan (29-2, 17 KOs) in an important fight for both fighters. These two can’t afford to lose if they want to stay highly ranked to get a title shot. Johnson, 33, is coming off of a failed attempt at dethroning International Boxing Federation light heavyweight champion Artur Beterbiev last October at the Wintrust Arena, in Chicago, Illinois. Johnson proved that he could hang with Beterbiev. Johnson had a chance to knockout Beterbiev in the second round after hurting him, but he let the opportunity slip away by failing to go after him. Without question, Johnson has world class punching power, but he doesn’t fight often enough to take advantage of his talent. Johnson’s a fighter that has the power to go far if he can stay busy. Johnson needs to improve his defensive kills so that he doesn’t get nailed as much as he was getting hit by Beterbiev.

Unbeaten heavyweight contender Sergey Kuzmin (14-0, 11 KOs) will be facing a highly motivated journeyman Joey Dawejko (19-6-4, 11 KOs) in a 10 round fight. Although Dawejko, 28, is coming into this contest having lost his last two fights against Andrey Fedosov and Bryant Jennings, he’s still a threat to beating the 31-year-old Kuzmin due to the power he possesses. Dawejko is the younger guy, and he’ll be looking to press Kuzmin.

Unbeaten junior middleweight prospect Israil Madrimov (1-0, 1 KOs) will be back inside the ring in a 10 round fight against knockout artist Frank Rojas (24-2, 23 KOs) in a 10 round fight. Madrimov, 24, is a guy that is seen as a future world champion in the making. Madrimov, who comes from Uzbekistan, got power and amazing boxing skills. This is going to be fun fight to see how Madrimov does against a fighter with huge power in Rojas. The Venezuelan KO artist has lost just twice in his career to Cameron Hammond and Jose Benavidez Jr. Those are good fighters. Benavidez Jr. blitzed Rojas in stopping him in the first round last June. Benavidez Jr. never gave Rojas a chance to get his offense going in that fight. Madrimov will likely be looking to get Rojas out of there quickly to make a favorable impression on the U.S boxing fans, many of which will be seeing him for the first time.