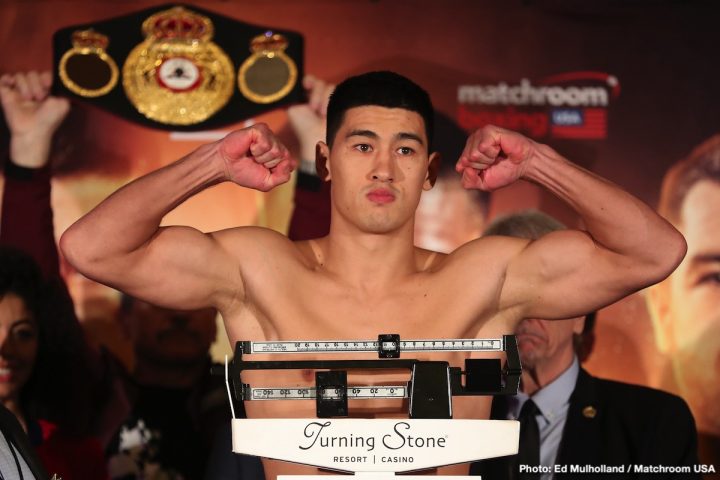 By Sean Jones: Dmitry Bivol is targeting WBA World super middleweight champion Saul Canelo Alvarez for his next fight after he defends his WBA light heavyweight title against Joe Smith Jr. tonight on DAZN at the Turning Stone Resort & Casino, in Verona. Bivol has made it known this week that he’s ready and willing to fight Canelo Alvarez in his next fight. If not him, then Bivol wants WBA Super World 168 lb champion Callum Smith, who many fans feel is the best fighter in the weight class today.

It goes without saying that Bivol would be the worst kind of opponent for Canelo to fight. Canelo cannot handle a fast pace fight against a puncher that never lets up. Bivol would likely have Canelo exhausted within the first three rounds by throwing one shot after another without standing back to survey the damage the way Gennady Golovkin was mistakenly doing in his two fights against the Golden Boy star.

Bivol wants Callum and Canelo. The talented Russian fighter feels that those should be easy fights to get made, because both guys fight on DAZN. Canelo doesnt have a lot of great options for fights aside from Gennady Golovkin and Daniel Jacobs on DAZN. Bivol is perfect for Canelo, as long as he’s able to slide down to 168 to make the fight happen.

The 28-year-old Bivol is on the express route to super-to the top in the sport. He just needs the scalps to quickly transform him into one of the biggest names in boxing. The likes of Canelo Alvarez, Callum Smith, Sergey Kovalev, Oleksander Gvozdyk, Artur Beterbiev and Marcus Browne would make Bivol a star if he could beat them. Getting any of them to agree to a fight might prove to be difficult, especially when you’re talking about Canelo. The Golden Boy star has been talking about wanting to fight WBO light heavyweight champion Sergey Kovalev, who fights in the same division as Bivol, but he hasn’t singled out Dmitry as a guy he wants to fight. Bivol might too talented for Canelo to want to fight.

Although Bivol (15-0, 11 KOs) fights at 175, he maintains that he can reduce his weight without any problems to get down to 168 to fight super middleweight champions Canelo Alvarez and Callum Smith.

What Bivol doesn’t quite understand is Canelo is likely only holding onto his WBA ‘regular’ super middleweight title as a status symbol, but not keeping it to actually defend it against talented guys like David Benavidez, Callum Smith or Bivol. It’s believed by a lot of boxing fans that if/when Canelo does defend his WBA World 168 lb belt, it’ll be against a popular – but flawed – fighter like Chris Eubank Jr. That’s someone that Canelo can clearly beat, but then so can Benavidez, Callum, Gilberto Ramirez, Jesse Hart, David Lemieux and Billy Joe Saunders.

“I know he’s the big star, but he’s just human like every boxer,” Bivol said about Canelo. “He’s Mexican, yes. Mexicans have a lot of fans in boxing. He has lot of fans, but it doesn’t make him unstoppable. He’s a human, and I believe in my skills. Of course, I believe in my victory, because I have good speed. I’m taller. Why can’t I beat him? This is where we have a different style. Different style makes boxing. I’m not sure if I have more skills, but I know if I have a good camp, I can win. We have a different style. I can win. He’s human,” Bivol said.

Bivol, 6’0″, would have a big four inch height advantage over Canelo if they fought, but that’s nothing new for the Mexican star. The 6’1″ Rocky Fielding had a five inch height advantage over Canelo last December, and yet he still lost to him. Height is nothing when someone fights Canelo. His technical skills, inside game and punch placement negates the height and reach of taller fighters than him. It would be very tough for Canelo to beat Bivol, because the Russian fighter has a bad style for him. Unlike Golovkin, Bivol throws a massive amount of punches in every round, and he never stops pressuring his opponents. Bivol wouldn’t beat Canelo so much on size, but rather this unrelenting pressure and high work rate. Golovkin still appeared to get the better of Canelo in their two fights, but he wasn’t throwing a lot of nonstop punches, which gave Alvarez plenty of time to rest. Canelo needs lots of rest breaks because his stamina is horrible. Bivol wouldn’t give Canelo any breaks. He would be forced to fight every second of every round. It wouldn’t be long before Canelo was reduced to a ragged, exhausted state. At that point, Bivol would take him out. It would end badly for Canelo within six rounds if he were to fight Bivol in this writer’s view. Golden Boy Promotions head honcho Oscar De La Hoya is wise, and he’ll make sure that Canelo never fights Bivol, even though the weight would favor him. Bivol would be draining down seven pounds from 175 to 168 to accommodate Canelo.

“Golovkin beat him. Mayweather beat him. Why can’t someone else beat him? Bivol said.

Canelo and his boxing fans probably won’t be too happy hearing Bivol say that Golovkin beat Alvarez TWICE, but obviously it’s true that he did defeat him in their two fights in the eyes of a lot of fans. Golovkin just wasn’t given the decision by the judges that worked those two fights. The boxing world saw GGG win those two fights, but not the judges that were assigned to the matches. Canelo was given a controversial draw and a 12 round majority decision in the two Canelo-GGG fights. Both of the fights took place at the same venue at the T-Mobile Arena in Las Vegas, Nevada. You can argue Canelo is 0-2 against Golovkin. A third fight between will give Canelo a chance to win his first true fight. A lot of fans are guessing the fight will take place in Vegas again at the T-Mobile, which is where Canelo will be facing IBF middleweight champion Daniel Jacobs on May 4 in a unification fight.